The competition over military bases in Djibouti imports the Indo-Pacific power rivalry to the Gulf of Aden and the western Indian Ocean. 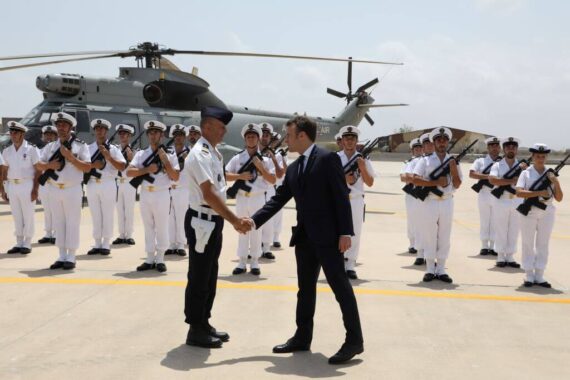 French president Emmanuel Macron reviews the troops as he visits the French military base in Djibouti on March 12, 2019. Photo by Ludovic Marin, AFP via Getty Images

It is geographically close to the strait of Bab-el-Mandeb, the oil rich Arabian Peninsula, and the strategic shipping lane of the Gulf of Aden.  The rise of sea robbery and piracy have recently surged the geostrategic and geo-economic relevance of the country. In addition to this, the weak security environments in Yemen and Somalia have also increased Djibouti’s significance.

The growing presence of international actors in the tiny African port state, triggered a debate around the country’s security. Djibouti hosts military bases belonging to Germany, Spain, Italy, France, the United States, the United Kingdom, China, and Saudi Arabia at a very little distance from one another. Russia and India too have strong interests in setting up military bases there.

Read: Piracy and the Global Military Presence in the Gulf of Aden

Moreover, the fight against Al-Shabab in Somalia, counter-piracy operations in the Gulf of Aden, and the Saudi-Iran competition over Yemen have invited new global actors such as China and Japan which also seek to establish military bases in the country.

Competition for military bases is too risky

Djibouti lost its geostrategic relevance in global politics with the end of the Cold War. However, the 9/11 terrorist attacks and the subsequent global war on terror plus the escalation of maritime security issues in the Gulf of Aden and the western coast of the Indian Ocean revamped the geostrategic competition.

Thereby, the last decades spotlighted a crude surge of demand for military and naval bases in Djibouti and new countries appeared on the horizon such as China, certain Gulf states, European countries, and the United States.

There are three reasons that increasing military buildup of land and sea bases in Djibouti may create far-reaching security challenges for the country. First, hosting military bases of different flags can pose a threat to the country’s ability to make independent decisions on political, economic, and social policies.

The various – and sometimes conflicting – interests of international actors may influence the policy-making processes. The case of the Port of Doraleh, for instance, is illustrative of how the country’s independent decision-making was put at risk when the United States raised its concerns over the transfer of the port’s operating rights to China.

Even though the authorities of Djibouti time and again tried to explain the matter denying the handover of the Port of Doraleh to China, the verbal promise from Djibouti could not defuse the growing concerns in Washington. U.S. Maritime General Thomas D. Waldhauser argued that “if the Chinese took over that port, then the consequences could be significant.” In response,  China’s Foreign Ministry spokesperson Geng Shuang said, “We hope that the U.S. side can objectively and fairly view China’s development and China-Africa cooperation.”

In the same vein, even though the Guelleh government promised to respect the strategic interests of the United States, Washington does not view Djibouti’s economic policy prospects of emerging as an important commercial hub in the Horn of Africa positively.

Washington’s uneasiness basically stems from Beijing’s increasing engagement in Djibouti’s development projects in multiple ways; the projects ensure the lion’s share goes to Beijing. From another perspective, the whole episode shows that, in one way or another, the development plans of this African port nation have been hijacked by the interests of global actors.

The second possible risk of renting strategic locations to multiple global actors to open their military bases is a decline of the legitimacy of Djibouti’s government on both the domestic and international level. This is indeed the case since Djibouti’s capacity to act independently has already been limited and overshadowed. When Djibouti failed to pay its swelling public foreign debt, the risk of a legitimacy crisis became nearer and graver.

It is vital to note that Djibouti’s public foreign debt has surged from 50% of its GDP in 2016 to 104% in 2018 where much of the lending comes from China. Against this background, at best, Djibouti’s growing dependency on Chinese loans could provide a leverage to China to intervene in the country’s various domestic and international affairs, and, at worst, the swelling Chinese debt may end up with turning Djibouti into China’s satellite state in the Horn of Africa.

Third, an increasing global competition over Djibouti could risk the de facto security of the country and its people. This may happen if global actors toil to redesign domestic political divisions in the country in order to bring their own loyal ruler to power.

What about the Horn of Africa?

Read: Why Many Liberation Movements Fail at Government in Africa

Global actors with military bases in Djibouti engage in expanding their interests to neighboring countries to align and counter-align with local actors that may, at best, raise tensions and, at worst, trigger all-out-war. In fact, the point here is not to demonize global actors’ military presence in Djibouti and/or other countries but rather to show that it is the “black box” of a looming danger in the region – a danger that arises from the competition over military bases.

The competition over military bases in Djibouti other than lining the pockets of key figures in the region imports the Indo-Pacific power rivalry to the Gulf of Aden and the western Indian Ocean. The security in the Horn of Africa is now threatened by militarization and the stability of the region is declining day by day.

VIDEO: The world’s biggest military base