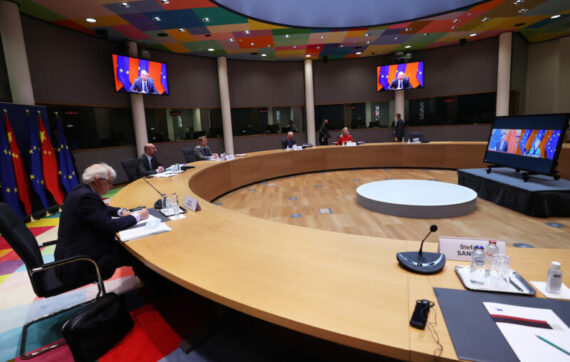 A general view from the EU-China Summit held via videoconferencing in Brussel, Belgium on April 01, 2022. Photo by Anadolu Images

he year 2022 witnessed several tensions in EU–China relations, mostly due to COVID-19-related supply chain disruptions, the Russia-Ukraine War, and Taiwan. The question here is to what extent these crises could affect relations between the EU and China in the long run.

Diplomatic relations between the European Union and China go back to 1975. Following the signing of a trade agreement in 1978, bilateral trade increased significantly. The door to a new cooperation opened after the Trade and Cooperation Agreement was signed in 1985 thanks to China’s opening up and the regular visits between European and Chinese diplomats and businesspeople.

Read: EU-China Trade Deal: Where Does the US Stand?

Three EU member states had a trade surplus with China, according to the goods trade balance with Germany accounting for the biggest surplus.

This reciprocal trade relationship plays a fundamental role in the respective economic development and social prosperity, especially in this era with an increasing risk of geopolitical conflict,” Dr. Zang Shumei, a research fellow at the School of Politics and International Relations at East China Normal University, told Politics Today.

Who needs whom more – China or the EU?

Despite efforts by EU policymakers to diversify the bloc’s trade and investments, commercial ties with China are strongly established and resist alternations, and Europe is still one of Chinese investors’ most preferred destinations.

Additionally, the insufficiency of investment reciprocity is detrimental to European interests. In terms of labor and manufacturing costs, logistics systems, and industrial parks, China continues to be a competitive manufacturing hub. Twenty-four EU member states had a trade deficit with China. The Netherlands had the largest deficit, followed by Poland and Italy. “We find that the trade deficit has been growing between the two partners. But we should not simply conclude that one needs the other one more. China and the EU will continue to need each other, not only in trade but also in various global issues,” stated Dr. Zang.

The United States as third actor in the EU-China relations

There is a third factor affecting EU-China relations: the United States. The Ministry of Foreign Affairs of China and the European Union are two major forces of multilateralism. Upholding multilateralism has been one of their most important common understandings and shared responsibilities.

There are diverging opinions in the European Union about the limits of acting in accord on foreign and domestic policies. Countries from the former Eastern European bloc tend to seek U.S. protection through NATO and favor the U.S. presence and policies.

Moreover, these countries still need to make urgent infrastructural investments as their economies develop slowly. This is the same reason why, conversely, some countries of the former Eastern European bloc have approached China’s Belt and Road Initiative positively.

Cultivating its relations further with the 16+1 states in Eastern Europe, China is aware of this internal difference. Meanwhile, China’s presence in Eastern Europe makes an anti-China stance at the EU level less likely.

Relations between Lithuania, an EU member state, and China stopped in July 2021 after Lithuania decided to allow the Taiwanese Representative Office in Lithuania to be opened in Vilnius under the name “Taiwan.”

Overall, it is clear that member states’ political stances on China will not be the same, but some EU members have a bigger impact on the decision-making process. Dr. Zang argues that “Macron’s insistence on Europe’s strategic autonomy shows traces of Gaullism, even though this autonomy is severely threatened by the current crisis in Ukraine. Such an insistence on French and European autonomy has been an important positive element for constructing good Sino-French and Sino-Europe relations.”

The EU now faces a dilemma regarding its relations with China. There are economic interests and trade deals, while there are also clashing geopolitical interests and priorities, which are a headache for the EU.

In certain fields such as the carbon markets, long-term emission development strategies, green deals, energy efficiency, and low-emission transport and cities, the EU and China are stepping up their collaboration.

In April 2022, the European External Action Service (EEAS) published an EU-China factsheet. According to the factsheet, over the past year, EU-China bilateral relations have deteriorated due to a number of factors such as China’s countermeasures to EU sanctions on human rights, economic coercion, trade measures against the European single market as part of the diplomatic dispute with Lithuania, and China’s positioning on the war in Ukraine.

The EU and China both view the post-pandemic economic recovery as a top priority following more than two years of international efforts to combat COVID-19. Moreover, the EU does not want to lose its influence in Africa to new actors like China.

“The EU and China are both important partners of Africa. China’s increasing impact in the past decades has created fear in the EU and other western countries. In my opinion, if we cease to use the Cold War mindset, if we focus on coopetition instead of rivalry that may have both cooperative and competitive elements, this would be more helpful. Increasing multilateral cooperation between Africa, China, and the EU is indispensable for joint development projects, and they could be realized,” emphasized Dr. Zang, reflecting a Chinese perspective.

The EU continues to recognize the “One China Policy” as the cornerstone of the bilateral relations with China. However, on September 15, members of the European Parliament restated their stance that the Taiwan Strait status quo cannot be changed unilaterally and that they oppose the use of force. The EU overwhelmingly still views China as an economic partner in cooperation and negotiation, an economic competitor, and a systemic rival all at the same time.