Worryingly, for many Maldivians, President Solih has been acting as New Delhi's "yes-man" since the election. 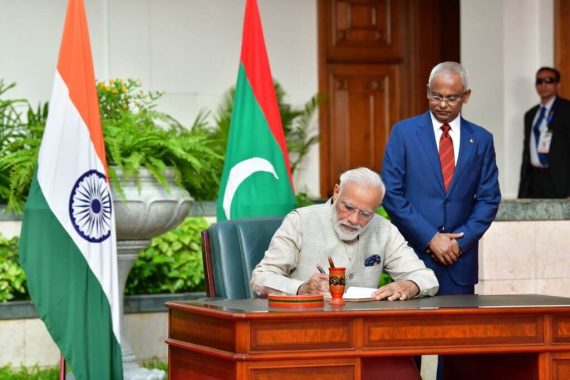 On November 12, thousands of protesters took to the streets of the Maldivian capital Male, calling for and an end to the Indian military presence and interference in domestic affairs, while chanting, “Indian Military Out,” making it one of the largest ever political protests on the archipelagic country, and igniting similar protests elsewhere, including Fuvahmulah city, where thousands gathered on Sunday, November 14, 2021.

Despite the Maldivian government’s efforts to ignore and downplay the protester’s demands, the hashtags “IndiaOut,” “IndianMilitaryOut,” and “DefendMaldives” have since become the top trending topics on social media in the country.

While the Maldives and India have long enjoyed warm ties, with Indian nationals accounting for 90,000 of the roughly 1.5 million tourists who visit the Maldivian islands each year, there’s been a noticeable shift in attitudes among the general population in recent times, as resentment grows towards New Delhi’s ever-more aggressive policies and meddling in the country and region.

These anxieties were given a jolt in June, when a series of leaked documents, showing communication between the Maldives Foreign Ministry and the Indian High Commission, revealed the Indian government denied a request by the previous Maldivian administration, under President Abdulla Yameen, to withdraw its Indian Military helicopters from the country in the months leading up to the 2018 Presidential Election.

Mr. Yameen was ultimately defeated by his Maldivian Democratic Party (MDP) rival and current President – Ibrahim Mohamed Solih – in the November 2018 polls, a victory secured among allegations New Delhi had tipped its finger on the scales by meddling in the election.

These allegations were given undeniable credibility when former President and current Speaker of Parliament – Mohamed Nasheed – gave an interview to India Today in 2019, in which he praised Indian officials and diplomats for creating a “small window” to help MDP win the election.

“First of all, no one thought we would win the election. Everyone thought it would be heavily rigged, and we had no choice, but India didn’t think that. Indian officials and diplomats were at it. They knew that they can create a small window, and you know if we even get a millimeter, we knew we could go ahead and we could win the election…we asked them to do all sort of things which brought us the election,” he said.

That said – the previous government were no angels, with human rights groups accusing the Yameen administration of eroding civil liberties, jailing political opponents and corruption, while maintaining a staunchly pro-China stance.

According to Shakeel, the Indian government’s meddling in the 2018 election has been likened by some to Russia’s interference in the 2016 U.S. Presidential Election, whereby Kremlin backed operators hacked into email accounts of Democratic Party officials to help Donald Trump win by embarrassing his rival, Hilary Clinton.

Worryingly, for many Maldivians, President Solih has been acting as New Delhi’s “yes-man” since the election, prompting widespread concerns he has traded the country’s sovereignty and independence to enrich his political and personal fortunes, while also dressing up Indian military expansionism as “infrastructure projects.”

More troubling still is the way some of the agreements between the two countries have been signed in secrecy, and made available to the public only because of leaked documents obtained by The Maldives Journal earlier this year.

Worryingly, for many Maldivians, President Solih has been acting as New Delhi’s “yes-man” since the election.

At the core of the protesters grievances is revelation the current Maldivian government has signed a secretive deal with New Delhi, allowing for Indian military personnel to enjoy full diplomatic immunity and tax exemption status, thus constituting a violation of the Maldivian Constitution, which states foreign soldiers may not be stationed in the country without full approval from Parliament.

Hamdham Shakeel, co-founder and editor of the independently operated Maldives News Network, explained to Politics Today how Maldivians don’t wish to be caught in the middle of a potential future shooting war between India and China in the increasingly contested Indian Ocean, a concern he described as “one of the major driving forces behind anti-Indian military sentiments.”

“Stationing and operating military assets in the Maldives would mean that it has become a point of military operation. Maldivians would have to face collateral damages for stationing Indian military personnel and hardware in the Maldives,” therefore breaking from its long-held policy of remaining neutral in regional and great power rivalries, said Shakeel.

Of particular concern is an agreement signed between the current Maldivian government and India on 21 February to develop and maintain the country’s most strategic military naval bases – Uthuru ThilhaFalhu (UTF) – which is not only located within close proximity to the capital city, but also described as its “last line of defence.”

Details of the agreement became public only after it was leaked to local newspapers, revealing Indian military personnel will be allowed to carry arms and live ammunition and conduct their own surveillance and patrols in the country.

It’s for these reasons, the “Indian Military Out” protest movement continues to gather steam, becoming better organized, with the group “Defend Maldives,” consisting of the opposition coalition, a breakaway faction of the ruling party and many other smaller groups, lending its support and infrastructure.

Expectedly, the Maldivian government launched a counter campaign against the protest movement on 17 November, when it issued a statement condemning the protesters as only a “small group of individuals with the objective of tarnishing the country’s long-standing cordial ties with India,” while accusing them of “spreading false information.”

Conspicuously, however, the Maldivian government mischievously removed the word “military” in its statement, therefore mislabelling the protest movement as “India Out,” a naked effort to malign the “Indian Military Out” protest movement as anti-India.

Shakeel scoffed at the government’s characterization of the protesters, describing the Maldivian people as great friends of the Indian people and culture, and saying they specifically oppose India’s BJP government’s “aggressive foreign policy revolving around Indian imperialism in the Indian Ocean” and encroachment on the country’s sovereignty and independence.