"Godi Media" in Modi's India: A War on Journalists?

Indian news media watchers have observed how the country’s mainstream media has functioned as the public relations arm of Narendra Modi, leading many to mock them as the "Godi Media." 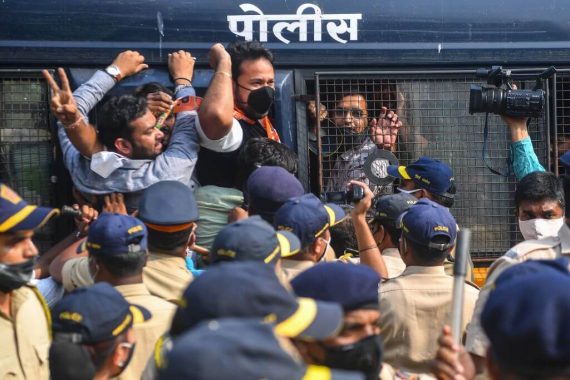 Activists and supporters of Bharatiya Janata Party (BJP) shout slogans as they are detained by the police while protesting against the arrest of Indian television journalist Arnab Goswami, in Mumbai on November 4, 2020. Photo by INDRANIL MUKHERJEE/AFP via Getty Images.

Four weeks after Amnesty International was forced to halt is operations in India in September 2020, citing the Indian government’s crackdown on civil society, the UK-based human rights organization published a report warning of a coordinated effort to target journalists and activists in India and Kashmir, specifically those critical of Prime Minister Narendra Modi and Bharatiya Janata Party (BJP).

The Indian government “must immediately halt its intensifying suppression of dissent,” said Amnesty International, following a series of counter-terrorism raids on human rights groups and human rights defenders and journalists in Jammu and Kashmir.

Since then, the situation has deteriorated from bad to worse for journalists in both Kashmir and India, culminating with terrorism charges levelled against me and 101 other journalists, lawyers, academics, and human rights defenders in November of last year – for “promoting enmity between religious groups” across social media, an Orwellian way to describe reporting violent attacks committed by right-wing Hindu groups against Muslims in Tripura state in late October.

Read: The Hindutva War on Christians in India

These criminal charges were filed under the country’s draconian anti-terror law – the Unlawful Activities Prevention Act (UAPA) – a legacy of British colonial rule, prompting a strong rebuke from Reporters Without Borders, which said our “only crimes were to cover the recent attacks against mosques in the North-eastern state of Tripura,” while the Editors Guild of India described the bogus charges as an attempt by the BJP ruled state government to “deflect attention away from its own failure to control majoritarian violence.”

International silence has created space for New Delhi to carry out “counter-terrorism raids” against journalists and editors.

But whereas human rights and civil society groups have been vocal in their condemnation of the Modi regime’s anti-democratic and unconstitutional crackdown on dissent, India’s international allies, particularly Western governments, have been conspicuously silent, showing a willingness to ignore its attacks on free speech and free press in exchange for New Delhi’s unfettered cooperation in the contestation between Washington DC and Beijing for primacy in Indo-Pacific.

This international silence has created space for New Delhi to carry out an ever-increasing number of cynically named “counter-terrorism raids” against journalists and editors, particularly those in Indian administered Kashmir. Notably these raids go unreported in the intimidated and ever-compliant mainstream media ecosystem, which has helped Modi build the most extraordinary personality cult in modern political history,” as noted by former UN under-secretary-general and Congress MP Shashi Tharoor.

VIDEO: Why the Far-Right is Rising Globally – Commonalities

This has created a hostile and frightening environment for journalist and editors who are critical of the Modi government and Hindu nationalist movement, a reality that was visited upon the Kashmir Press Club last month, when authorities shut down its place of business, a move described as “extremely frightening” and “the worst kind of state heavy handedness” against the free press in living memory, with Anuradha Bhasin, the executive editor of the Kashmir Times, calling it an attempt to “wipe out any trace of independent press and turn whatever exists into a public relations vehicle” for BJP.

Barely a week later, authorities arrested Fahad Shah, a prominent Indian journalist and editor-in-chief of the news portal Kashmir Walla, for reporting a police raid in late January. He was charged with uploading “anti-national content,” with “criminal intention” to create fear among the public,” akin to “glorifying terrorist activities.”

In both style and substance, the arrest of Shah mirrored the arrest of 26-year-old journalist Sajad Gul, who was arrested two weeks earlier for uploading a video to Twitter showing a deceased militant’s family criticizing the Indian government. He was charged with disseminating “disinformation and false narratives” to “provoke” residents of Kashmir to “resort to violence.”

If convicted of sedition under the draconian anti-terrorism legislation, known as the Unlawful Activities Prevention Act (UAPA), both Shah and Gul face life imprisonment. It’s for this reason Sanjay Kapoor, head of the Editors Guild of India, accused the government of “stifling” democracy in Kashmir, and for painting journalists as the “enemy of the state.”

Meanwhile, Hindu nationalist leaders who publicly call for a genocide against Muslims and other religious minorities are ignored by security forces and the Indian government. The double standard and motive of the Modi government could not be more obvious.

It must also be noted here that this anti-democratic campaign to intimidate and silence journalists in Kashmir is taking place alongside continued government-controlled communications blackouts and curfews. The Modi government is desperate to deny the international community evidence of its human rights violations in the disputed territory, which have become measurably worse since 2019, the year India revoked Kashmir’s semi-autonomous status, as illustrated in an upward spike in extrajudicial killings.

“Indian authorities appear determined to prevent journalists from doing their jobs,” says Steven Butler, Asia programme coordinator of the U.S.-based Committee to Protect Journalists (CPJ), which partly explains why India has seen its democracy downgraded by 53rd position on the most recent Democracy Index published by The Economist Intelligence Unit, while falling to 142nd position out of 180 countries in the 2021 World Press Freedom Index published by Reporters Without Borders.

The Sweden-based V-Dem Institute went even further in its latest report on global democracy in describing India an “electoral autocracy,” and accusing the Modi government of “diminishing freedom of expression, media and civil society” to a point where it’s “as autocratic as Pakistan and worse than its neighbours Bangladesh and Nepal.”

Any number of Indian news media watchers have observed how the country’s mainstream media has essentially functioned as the public relations arm of Modi and BJP, leading many to mock influential television news channels as the “Godi Media,” a pejorative Hindi term that accuses journalists and editors of performing as lapdogs for the Hindu nationalist agenda.

“Perhaps the best example of how journalists have become accustomed to not challenging the government is the fact that Modi failed to hold a single press conference in his first term in office,” says iconic Indian editor and journalist Vir Sanghvi, who also observes how access to the Modi government has become conditional on the journalist’s ideology.

The question is what will New Delhi’s democratic allies do about it?