It’s almost always boys and girls from economically underdeveloped areas who appear to be the victims and end up in the hands of the PKK. 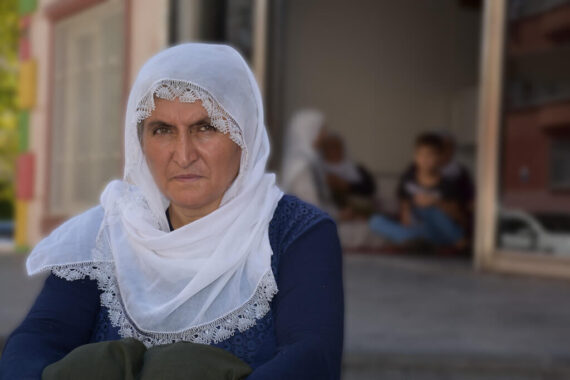 The photo dated August 24, 2019 shows that a Kurdish mother Hacire Akar, who started to stage a protest near the same HDP office, claiming that her 21-year-old son was taken to the mountains by the PKK. Photo by Mehmet Şah Yılmaz, Anadolu Images

On Friday, August 22, 2019, Hacire Akar became the first Kurdish mother to start a sit-down protest in front of the provincial headquarters of the Peoples’ Democratic Party (HDP), the pro-Kurdish and third largest opposition party, in southeastern Turkey’s Diyarbakir.

Akar’s son was allegedly kidnapped by the ethno-separatist terrorist group PKK. As a result of her protest and the efforts of the Turkish authorities, Akar’s son returned a few days later, which motivated other Kurdish mothers to take action. Following Hacire Akar, women from different Turkish cities started the sit-down protest in front of the HDP headquarters for the first time on September 3, 2019.

Two years later, on Thursday, September 3, 2021, the kidnapped children were once again remembered and people from all across the country traveled to Diyarbakir to support the mothers. The HDP building has now been emptied and HDP councilors no longer work at the provincial headquarter of the political party. A large tent was set up by the parents where everyone has their own table with a photo of their missing child. Some of these families have not heard from their children in 6 to 8 years. Occasionally, a few of them have received a video where the PKK threatens them and demands they stop the protest.

Read: The PKK Is the Wrong Horse to Back in the Middle East

The disappearance of the children dramatically affected the social lives of their parents and relatives. Many of them agree that all joy disappeared from their homes when their children abruptly went missing.

Maide Türemiş, a Kurdish mother from Berlin, traveled to Diyarbakir to share her story and express support to her fellow mothers. According to Türemiş, her daughter Nilüfer was recruited through a Berlin-based Kurdish folk dance association. Having experienced a period of ups and downs in their relationship, the then teenage Nilüfer (19) left Germany to join the PKK, her mother told Politics Today. “My daughter has been gone for 18 months. I’m here today to let the world know that my child doesn’t belong to anyone. Neither to the Kurds, nor to the Turks. I just want my child back.”

The recently published book My Mother’s Voice gives an overview of exclusive interviews with the mothers and child returnees of the PKK. The author, Tülay Demir Oktay, spent over two years completing the book in three different languages and hopes to create greater awareness of the issue of children abducted by the PKK, which few people are aware of outside of Turkey.

Read: ‘Give me my son or I will burn this place down!’: A Kurdish Mother’s Fight against the PKK

In the past three years, 32 children and young adults who had been abducted or (forcibly) recruited, managed to escape the PKK. A few were held in the Hasakah Central Prison in Syria which is run by the Syrian Democratic Forces (SDF). Some escaped by themselves, others with help from the local population. Mehmet Emin Alkan, 22, one of the survivors who spoke to Politics Today, said he tried to escape from the organization 22 times, but was mostly apprehended the next day. In his last attempt, he managed to break out of the compound of Al-Hasakah.

Mehmet Emin Alkan, 22, one of the survivors who spoke to Politics Today, said he tried to escape from the organization 22 times, but was mostly apprehended the next day.

There are different stories of how children join the PKK. However, the most common way is first joining HDP activities both within and outside of the region. Additionally, it’s almost always boys and girls from economically less developed areas who appear to be the victims and end up in the hands of the PKK. “You won’t see a child victim that is rich or smart, or that comes from a prosperous family. They always try to manipulate the ones from poor households or uneducated ones. Just like my son,” said the father of Mustafa Bicer, 19.

The PKK sent Mustafa Bicer’s proof-of-life video from captivity to his parents earlier this year, in which Mustafa was forced to say he joined the organization voluntarily. The video was sent to the parents and later published online with other visual recordings of children, aged 8 to 10, trained and being used as child soldiers by the PKK’s Syrian branch, the YPG, which according to the parents continues to recruit children.

Read: Mothers’ Sit-In Protests in Diyarbakir: A Catalyst for Resistance against the PKK?

Mustafa Biçer managed to escape “the mountains” of the PKK last month and told Politics Today about his experiences over the past two years. “I started to get in touch with PKK fighters via the internet and told them I wanted to fight against DAESH. They invited me to Urfa [a city in southeastern Turkey about 150 km from Diyarbakir]. There, I met three men, including two Arab smugglers.

We spent the night in Akçakale and the next day the two smugglers brought me to the Syrian city of Tel Abyad. At that point, I regretted doing so, and I wanted to go home. They told me it was too late. If I went go, I’d be arrested by the Turkish authorities.” Mustafa adds, “They say that women and men are equal in the ‘mountains’ of the PKK. None of that is true. I have seen women who were raped, became pregnant, and never saw their newborn babies again after they gave birth.”

Mehmet Emin Alkan, a 22-year-old who has suffered a lot in his life, was mentally unstable after the death of his father four years ago and sought refuge in the HDP, with the help of his neighbor. The financial situation at home forced him join the HDP as they promised to take care of his family. Alkan eventually crossed the Turkish-Syrian border with a group of 50 men and joined the PKK. He spent three years between Iran, Iraq, and Syria where he was deployed on multiple fronts to fight against DAESH.

He spoke about the experiences of the past three years to Politics Today in the living room of his parents’ home in a village between Diyarbakir and Mardin. “The battle for Manbij was the toughest, but I also have been through a lot during the battle in Raqqa and Deir ez-Zor. At the castle of Salah el-Din in Syria, which is located on a hilltop near the port city of Latakia, we found hundreds of bodies decapitated by DAESH.” After numerous attempts to escape the PKK, Alkan was placed in the toilet of a prison, where he had been forced to stay naked in cramped conditions without natural daylight and ventilation for nearly seven months.

Despite their gruesome experiences and the traumas they have experienced, Mustafa Biçer and Mehmet Emin Alkan are able to accept the past and start their lives over again. Unfortunately, many children are still waiting to return to their parents, others have been brainwashed in such a way that they continue to want to fight for the PKK, and others yet might have been killed.

The parents whose children managed to escape are happy and relieved, but will not stop protesting until all the children taken by the PKK are reunited with their families.

VIDEO: Mothers’ Speaking Out Against PKK/YPG