The Turcos Are Coming: Turkey’s Growing Ties with Latin America 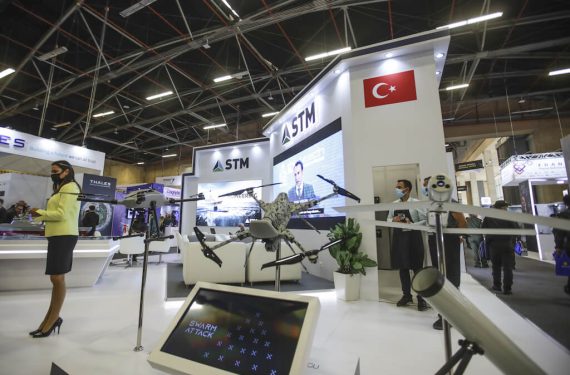 Turkey's STM company participates in Expodefensa 2021, International Defense and Security Trade Fair in Bogota, Colombia on December 01, 2021. Expodefensa’s first edition was held in 2009 at the CORFERIAS exhibition center in Bogota, as part of the project of the Ministry of National Defense of Colombia to present the capabilities of its armed forces to key international players. Photo by Juancho Torres. Anadolu Images.

Nayib Bukele, the president of El Salvador of Arab/Palestinian origin, made his first visit to Turkey in January 2022, where he signed a series of agreements covering economy, defense industry, and technology among others with his counterpart Recep Tayyip Erdoğan. In a strained relationship with the Biden administration, Bukele finds in Ankara a potential partner to develop a broad cooperation agenda, while later visiting the United Arab Emirates (UAE) in his regional tour.

If geopolitics rules the dynamics of the Middle East and the Black Sea region, ideology is what matters most in Latin America’s regional and global affairs. Currently, Latin America has a complex mix of conservative populist leaders such as Brazil’s Bolsonaro and El Salvador’s Bukele and the return of a “pink” tide after the elections of Alberto Fernandez in Argentina, Pedro Castillo in Perú, and Gabriel Boric in Chile, in addition to the left-wing governments in Cuba, Venezuela, and Nicaragua.

Despite regional polarization, conservatives and leftists in Latin America have a common point: both are experiencing complicated relations with the Biden administration, so there is a need to diversify relations globally. How do they diversify? They are increasingly looking to engage with Eurasian regional and global powers from China to Turkey, despite pressures from the West. Among other reasons, this is why Jair Bolsonaro is soon visiting Moscow, Alberto Fernandez decided to join the Chinese-led Belt and Road Initiative (BRI), and Bukele visited Turkey.

Bukele’s visit to Turkey seems to be a turning point in Turkish-Latin American relations. It is not only the first Latin American presidential visit to Turkey in the COVID19 era, but it signals a series of elements that are shaping a new agenda in line with Turkish foreign policy. First, technology is becoming the forefront of a new wave of Turkish activism. Second, Turkish private investing in Latin America and the Caribbean is growing almost from scratch, thus showing a new face for companies’ internationalization, and third, Turkish soft power is capturing increasing attention.

Ankara’s opening to Latin America has reached unprecedented levels. From almost non-existent regular diplomatic ties and scarce trade flows in the early 2000s, Turkey took the lead with a multidimensional foreign policy which identified various opportunities in Latin America. Twenty years later, the outcome is more than positive. Turkey has 17 embassies in Latin America, Turkish imports jumped from less than US$3.5 billion in 2010 to 8.5 billion in 2018, while exports doubled in the same period, reaching US$3.2 billion.

Turkish Airlines has flights to several regional destinations in Latin America and Turkish television series are famous and appreciated in the region, while hundreds of Latin American students have completed their studies in Turkey. Finally, Turkey is an observer member of different regional organizations such as the Central American Integration System (SICA), the Pacific Alliance, and, lately, Parlatino, the Latin American Parliament.

Despite participating in regional defense fairs such as Colombia’s Expodefensa or Brazil’s LAAD Defense and Security, Turkey is still not a competitive player in the complex regional arms sales market. However, Bukele’s initial interest in the unmanned aerial vehicle TAI Anka and the signing of a MoU on space and satellite systems cooperation could be a good starting point.

In the space area, there has been a game changer: Turkey and Argentina have agreed to develop the GSATCOM joint satellite project based on an agreement between Turkish Aerospace Industries (TAI) and the Argentina-based INVAP, which provides an alternative route to technological growth, bypassing the dependence on traditional geopolitical partners and technology providers.

Finally, renewables – especially solar, hydroelectric, wind, and geothermal energy – are central to Turkey’s energy strategy due to the energy bill cost and the aim to collaborate on sustainable development. The country’s renewable capacity will be expanded over 50% in the next five years according to the International Energy Agency, while Latin America is moving to a more sustainable approach over using traditional sources of energy. The potential investment of a geothermal plant in El Salvador can be an example of the current technological capabilities and visualize opportunities for investments in other countries where the development of green energy is yet to move forward.

At the same time, Turkish investments are growing in Latin America. Up to the mid-2000s, Kordsa, a Sabanci Holding subsidiary in Argentina, was the only company investing in the region, but nowadays more than 20 Turkish companies operate in the region, mostly in the automotive, mining, and transportation sectors.

For example, Turkish Airlines is present in several countries from Argentina to Cuba, Yildirim Holding is close to exploiting the mega mine project Cañaverales in Colombia, and the hazelnut producer Banu is developing a long-term investment in Chile. Until recently, Turkish businesspeople were reluctant to invest in such a distant region, but the growing presence of Turkish Airlines, a series of high-level visits (usually with the presence of businesspeople), and the sustained government support for trade missions is beginning to pay off.

Read: “We Have a Pro-Palestinian Lobby in Latin America” – Interview with Simán Khoury

Soft power is also offering returns along the cultural connection. Multiple players such as Anadolu Agency, Turkish Cooperation and Coordination Agency (TIKA), the Turkish Maarif Foundation, and, more recently, the Yunus Emre Institute, which opened offices in Mexico DF and Buenos Aires, are making important contributions, while television series have exposed the Latin America public to the Turkish way of life. Finally, the ongoing “Armenia-Turkey Normalization Process” can help ease the bilateral relations with countries with significant Armenian communities such as Argentina and Uruguay.

Despite the global gap during the peak of the COVID19 pandemic crisis, relations between Turkey and Latin America are reassembling on a new, tech-oriented agenda. Nowadays, Latin America sees Turkey as an extra-regional partner – such as Indonesia, South Korea, or Australia – with which it can cooperate on different bilateral and multilateral interests, and where it can look for opportunities to improve its economic development, the major goal of Latin American countries. Now is the time to mature and expand these relationships. 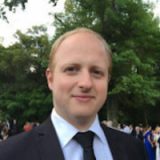 Dr. Ariel González Levaggi is an associate professor at the Department of Political Science and International Relations, Faculty of Social Sciences at the Pontifical Catholic University of Argentina (UCA). His academic research focuses on the international relations of Latin America, and regional security in Eurasia and the Middle East. He holds a PhD in international relations and political science from Koç University, Turkey.

Go to Top
Also Read
South America: Left-Wing Candidates Score in Politics
We use cookies to optimize your online user experience. To learn about our use of cookies and how you can manage your cookie settings, please see our Privacy Policy. By continuing to use our site you are excepting our use of cookies.Accept Cookies & CloseMore Info