The Spanish-American philosopher George Santayana once said, "Only the dead have seen the end of war," which best explains the situation in Libya. 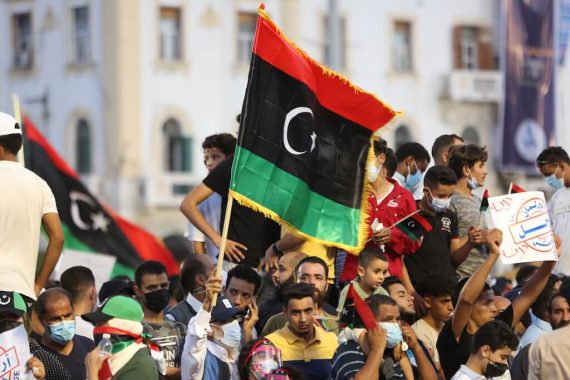 Libyans stage a protest against the "withdrawal the vote of confidence from the government" decision of the House of Representatives (TM), chaired by Khalifa Haftar's political ally Akile Salih, at Martyrs' Square in Tripoli, Libya on September 24, 2021. Photo by Hazem Turkia, Anadolu Images

The Spanish-American philosopher George Santayana once said, “Only the dead have seen the end of war.”

Considering the current situation in Libya, this would be among the best ways to describe the country’s current circumstances vis-à-vis the hope-filled attempts to have free and fair elections which were planned more than a year ago.

Libyans hoped to end their more than a decade-long war when the UN-sponsored Libyan Political Dialogue Forum (LPDF) elected Abdul Hamid Dbeibah to lead a new transition government in the country and lead Libyans to the polls on December 24.

Following candidacies of controversial figures like Saif al-Islam Gaddafi and warlord Khalifa Haftar, and the lack of a constitutional basis to hold free and fair elections in the country within the agreed timeline, the process literally became a born-dead one.

Although the UN-sponsored LPDF made it clear that the mandate of Dbeibah’s government was valid until June 2022, the pro-Haftar, eastern-based parliament House of Representatives (HoR) argued that the UN-backed Government of National Unity’s (GNU) mandate had expired.

Read: What the Return of Mercenaries Means for the World Politics

The HoR and pro-Haftar figures’ opposition was followed by an attempt by the HoR to install a new rival government to challenge that of Dbeibah. Former UN-backed government, Government of National Unity’s Interior Minister Fathi Bashagha, after a series of negotiations with the HoR, was designated as the new PM of the transitional government, which was rejected by the GNU and the country’s west regions.

During this process, Bashagha tried to enter the capital, Tripoli, to assume power. His military convoy failed to do so, with Dbeibah saying he would hand over his power only to an elected government.

Dbeibah, on the other hand, announced his country’s plans to have elections while the UN was trying to bring different sides to the table to negotiate the constitutional basis for having elections amid the growing specter of military confrontation between the two sides.

Although the HoR initially refused to choose members for the joint committee, the rivals met on Tuesday, April 19, in the Egyptian capital Cairo, to discuss constitutional arrangements for new elections.

Twelve lawmakers from the HoR and another twelve from Libya’s High Council of State participated in UN-brokered talks, which resulted in disagreement.

The UN’s special adviser in Libya Stephanie Williams, following the meeting, said the parties agreed on another meeting after Ramadan.

The meeting took place amid the threats of the five pro-Hafter members of the 5+5 Military Committee calling for an embargo on oil export across Libya. It is believed that the main reason behind their move was to push prominent actors in the country to apply pressure on Dbeibah until he leaves.

It appears that Khalifa Haftar expects international actors to feel anxious about restoring oil production amid the newly occurring global energy crisis following the Russian invasion of Ukraine. The warlord believes that Western capitals will seek to appease him by ostracizing Dbeibah until the latter leaves office and flees.

Haftar’s move comes after Libya’s National Oil Corporation (NOC) and Dbeibah reached an $8 billion financial agreement with the money being transferred to the GNU on April 13.

The deal was the kiss of life for Dbeibah, potentially strengthening his hand when it comes to financial viability—the pro-Haftar side got angry.

Amid such a situation, international actors’ anxiety has reached its peak as their primary concern is to protect their self-interests rather than sanctioning Russia’s henchman in Libya (Haftar) at a time when Putin’s entire network is being targeted.

Aguila Saleh, the HoR’s speaker, Khalifa Haftar, and Fathi Bashagha are fully aware that the priority of the international community is not “legitimacy” but self-interest, a fact that can even be observed in their pragmatic statements.

The international community doesn’t want to abandon the pro-Haftar side to Russia; however, they also don’t want their so-called “pro-democracy” stance to be damaged in the eyes of the world by yielding up Dbeibah.

At this point, two strategies step forth. First, international actors will try their best to bring Dbeibah and Bashagha to the table to find a new and peaceful diplomatic final exit to have elections under their sponsorship. Second, they will recognize Bashagha’s legitimacy and offer a new political dialogue forum with a reshuffled Libyan team while not abandoning their rhetorical and democratic discourse.

The second option seems more feasible after considering what happened in 2019, as the U.S. played ostrich when Khalifa Haftar launched an offensive against the UN-backed government. Washington suspended the U.S.-citizen warlord’s trials about war crimes in Libya ahead of the December 24 elections.

As it is known, accessing the Mediterranean has been a consistent and significant goal of Russian foreign policy, which seeks to challenge NATO’s naval supremacy and the U.S. presence throughout the Eastern Mediterranean.

With its military existence in Syria, Moscow found a door to knock on: it sent infamous Wagner mercenaries in support of Haftar and built another passage for itself between Sirte and Jufra, critical spots in Libya neighboring the Eastern Mediterranean. Despite this, we have not seen Washington taking a solid stance against the warlord.

When Haftar’s military operation against the UN-backed government failed, thanks to Turkish forces’ support to the internationally recognized government, the U.S. was quick to broker a new political dialogue while hoping to force through elections.

As a new war and an oil embargo are at the international community’s elbow, the UN, the U.S., the UK, and others seek absolute legitimacy by any means. In their eyes, any sacrifice is worth protecting their interests, including sacrificing the democracy that Libya has been dreaming of after decades-long turmoil.

Ufuk Necat Tasci is a PhD candidate in international relations at Istanbul Medeniyet University. His research focuses on the new forms of war, proxy wars, and surrogate warfare in Libya in the post-Gaddafi era.

Also Read
In the Name of Democracy, Libya Must Postpone the Elections