The Arab Spring had many messages, the most important of which was that the Arab people could hold their governments accountable. 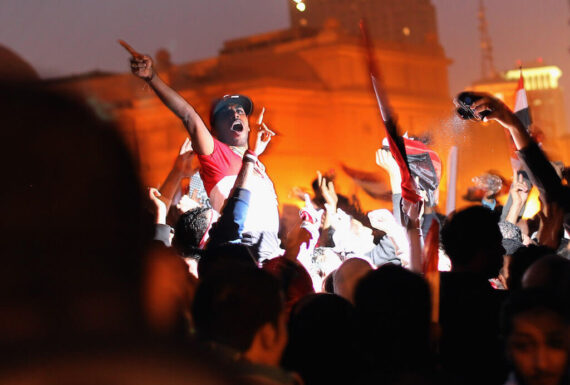 Anti-government demonstrators celebrate in Tahrir Square upon hearing the news of the resignation of Egyptian President Hosni Mubarak on February 11, 2011 in Cairo, Egypt. Photo by John Moore, Getty Images

In book four of Plato’s The Republic, the notion of dignity, what Socrates called thymos, (literally spiritedness), is deemed central to a harmonious political and social life in the polis. Thymos denotes that every subject of the polis is entitled to unalienable dignity and liberties by virtue of being a member of the polis.

This is reflected in politics as the general sentiments of the masses in the quest for better governance of sociopolitical affairs and personal liberties in the polis. When the spirit of thymos is disrupted or imbalanced, chaos and revolution looms in the horizon.

This year marks the 10th anniversary of the Arab Spring. Back then, millions of citizens had taken to the streets demanding an overhaul of politics and governance in their home countries. The Arab Spring was contagious and inspired protest from Wall Street to South America.

Indeed, when the Arab Spring started or ended is up for debate: the protests in Sudan and Algeria in 2019 that toppled dictatorial regimes underlined the intricate complexity of politics in the Arab world in the aftermath of the Arab Spring.

Moreover, while the Arab Spring occasioned unprecedented revolutionary moments in the Arab world, in global media discourses it was framed in implicitly Orientalist tropes such as narratives and assumptions of its failure or success; the impossibility of democracy in the “strong man”-craving attitudes of the Arab Muslim masses; or the incapability of the Muslim world to give birth to foster a revolution of the magnitude of the French Revolution.

These discourses refuse to acknowledge the unique context of the Arab Spring and its diverse outcomes.

Read: Sudanese People Long For a New Dawn Where Their Voices are Heard

Similarly, the Arab Spring was analyzed with Orientalist approaches in academia. Lorella Ventura observes how the Arab Spring laid bare the Orientalist stereotypes of the global media and academia. However, reduction of historical moments in the Muslim world to stereotypical cultural determinisms has a long history.

Just remember how the French radical philosopher Michel Foucault refused to assign the Iranian Revolution “the status of a revolution.” For him, history had stopped in the Muslim world and revolutions are impossible – except for a few involuntary and irrational uprising of the masses.

When the house of cards collapsed

When Mohamed Bouazizi, a humble street vendor set himself on fire on December 17, 2010, no one anticipated that his action would change the course of history in the Arab world, going as far as to topple long-term dictators in the region.

However, his act of self-immolation which was a protest against his dire economic condition and the confiscation of his vending wheelbarrow resonated on a deeper level with his fellow Tunisians and the whole region over the next few years.

The emblematic slogan Ash-Shab yurid isqat an-nizam (The people want to bring down the regime), which reverberated in Tahrir Square and beyond, is an indicator that the masses were tired of the stunted “political contracts” they were ruled by.

A man walks past a poster at a street on the 10th anniversary of the "Arab Spring" in Tunis, Tunisia on December 17, 2020. Photo by Yassine Gaidi, Anadolu Images

Remember that most of these dictatorships drew their legitimacy not from their people, but from centers of power in the Western world. Militarily equipped, funded, and absolved from any accountability by Western powers, Arab dictators were deemed friendly by their backers and ruled with impunity.

The Arab Spring was a complex historical moment that produced diverse outcomes.

However, with the financial crisis of 2007/08 and its aftermath shocks, youth unemployment, inflation, and the cost of living skyrocketed in many Middle East and North African (MENA) countries – as they did across the globe. This exposed the leaders beyond redemption to the  masses.

The slogan “Aish, Karama, Hurriya” (Bread, Dignity, Freedom) heralded the end of dictatorial regimes in Tunisia, Egypt, Libya, and Yemen, and, most recently, in Sudan and Algeria.

Beyond Orientalist discourses of “success” and “failure”

The Arab Spring was a complex historical moment that produced diverse outcomes. Viewing it as a single homogeneous event is tantamount to disregarding the historical and political diversity of the region and the role of geopolitics. The idea of the failure or the success of the Arab Spring has dominated Western global media discourses for the last decade. Most recently, the magazine Foreign Policy published an op-ed titled “Arab Dignity Is Real, So Is Arab Failure.”

The Economist added, “Why Democracy Failed in the Middle East.” The Guardian wrote, “Tunisians Curse Man Who Sparked Arab Spring”, and the Associated Press concluded with “A Decade of Upheaval and Lost Hopes.” Implicit in all these narratives are Orientalist tropes that spew essentialist ideas about the MENA region and its diverse societies.

The evaluation of the Arab Spring as a failure or success is not helpful as it serves ideological score points. The Arab Spring was a spontaneous historical event brought about by the masses with the help of technology and unprecedented diagonal civil society mobilization. The message was clear and loud: change is inevitable in the MENA region.

Orientalist discourses spread the idea that the Arab world, and the whole Muslim world, is devoid of a quest for change. Modern-day Orientalists tacitly argue that in this part of the world, revolutions occur only when the masses are irrational or hysterical.

For them, history here is a mechanical top-down engineering, and the masses are idle with no substantial political agency, real intention, or any grass-root organizing potential. History is dead in these lands; hence there is no progress.

The Arab Spring showed a different aspect of the Arab world, one that was considered lacking or stunted by culture or by religion. Diverse MENA societies flocked to the streets and squares irrespective of ethnicity, class, sect, or gender and demanded dignity, liberty, and change.

The Arab Spring protests changed the geopolitical configurations of the whole region. They were beyond representations of success and failure. The Arab Spring was a swift and complex political moment with different outcomes.

It led to some democratic gains in Tunisia, Algeria, and Sudan; and to counterrevolutions and civil wars in other countries. The Arab Spring had many messages, the most important of which was that the Arab people could hold their governments accountable.