Morocco will never give up its claims on Ceuta and Melilla. 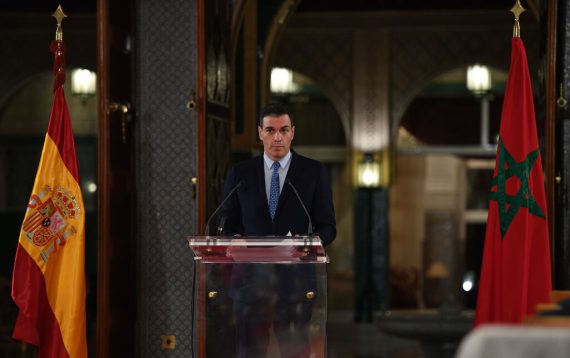 The president of the Spanish government Pedro Sánchez flew to Morocco on Thursday, April 7, to have a ftour (Moroccan iftar) with King Mohamed VI, and thus seal a reconciliation with his southern neighbor. It is more than likely that the harira, the traditional soup that Moroccans eat to break their fast, must have had a bitter taste for the Spanish leader.

A few hours before he flew to Rabat, the Spanish Congress of Deputies voted a “Proposición no de ley,” a Spanish parliamentary non-binding non-legislative motion, harshly reproaching the president for his reversal on the Western Sahara conflict.

Only 118 deputies of Sánchez’s PSOE (Spanish Socialist Workers’ Party) voted against the motion. The rest, a total of 168 deputies, some of whom are part of the government coalition or support the government without participating in it, and the conservative right-wing Popular Party MPs voted in favor of the motion. Sixty-one other deputies abstained, representing the far-right Vox and the center-liberals Ciudadanos (Citizens).

With the exception of the Socialists, everyone wanted to express their disagreement, if not anger, at the president for breaking a 46-year-old consensus, respected by all Spanish executives—right, center, and left—since the death of General Franco.

As a former colonial power that is still considered by the UN as the administrative power of Western Sahara (Morocco being a de facto power), Spain was bound to a certain so-called active neutrality. It was not supposed to lean towards either Morocco or the Polisario Front independence fighters. However, in a letter to the King of Morocco, Sánchez stated that he favored the Moroccan proposal of autonomy offered to the Saharawis in 2007, dubbing it “the most serious, realistic, and credible,” thus dynamiting this old and very sensitive balance.

This was all the more so as the decision in favor of Morocco was taken by the president alone, without consulting his governmental allies from the left-wing party Podemos, and without warning, as is customary, the right-wing opposition Popular Party.

In Spain, the Western Sahara conflict is a sensitive and almost demotic matter. While taking care not to anger their Moroccan neighbor to the south, which often threatens to open its borders to allow a flood of Moroccan and sub-Saharan migrants into Spain, various parties that have governed Spain have felt sympathy for their former colonial subjects, the Saharawis.

Between 1958 and 1976, the Saharawi people’s territory was known as the “Spanish province in Africa.” When Morocco captured the Sahara after the Green March launched by King Hassan II in 1975, the Spaniards felt bitter about having to abandon the Saharawi.

This is why Sánchez’s recent diplomatic and political update regarding the Western Sahara is perceived as a “betrayal” by many Spanish. It is now known that Spain has obtained nothing in exchange for the Sahara turnaround, except the return of the Moroccan ambassador to Madrid, who was recalled for consultation last year, and the reopening of land and sea borders.

Sánchez explained to the Spanish Congress of Deputies that the serious crisis with Spain’s southern neighbor, which started after Madrid allowed Brahim Ghali, the leader of the Polisario Front independence movement, to be treated in Spain after contracting COVID19, was “untenable,” But other authoritative voices, such as that of Miquel Iceta, Minister of Culture and a close friend of Sánchez, have exposed another version of this reversal.

In a widely read tweet, Iceta shared an article from the daily El Periódico de España in which he explained that there had been a barter between Spain and Morocco. In exchange for Madrid’s acceptance of the Moroccan autonomy proposal for Western Sahara, Rabat is said to have committed itself to stop claiming the Spanish enclaves of Ceuta, Melilla, and the Canary Islands. “The agreement obliges Morocco to give up Ceuta, Melilla, and the Canary Islands,” the newspaper wrote peremptorily.

And this is where it all gets murky and incomprehensible. By negotiating its renunciation of the self-determination of the Saharawis, in violation of international law since it is the UN that manages this conflict, did Madrid obtain written assurances from the Moroccans? Nothing could be further from certain.

Morocco will never give up its claims on Ceuta and Melilla, which it has economically suffocated by closing its borders and putting an end to smuggling, which is one of the sources of the prosperity of these two free ports.

It is not for nothing that Morocco has built a huge port on the Strait of Gibraltar, Tangier-Med, in one of the most important maritime crossing points in the world. Tangier-Med, considered today one of the largest ports in Africa, competes directly with the port of Algeciras, located on the other side of the strait, but also with the port of Ceuta.

As for Melilla, the unilateral closure in 2018 of the only land custom crossing between Spain and Morocco, that of Beni Ensar, opened after the Treaty of Fès in 1912 and ratified after Morocco’s independence in 1956, is another manifestation of the Moroccan will to strangle the economy of this city.

On the other hand, although Morocco does not formally claim the Canary Islands, in 2020, the House of Representatives (lower house of parliament) voted two bills extending Moroccan territorial waters to a point overlapping with those of the islands.

It is therefore hard to see Rabat giving up its historical claims to landlocked territories in Africa only to thank the Spanish government for saying that it found the Moroccan autonomy plan for Western Sahara to be the “most serious, realistic, and credible.”

Moreover, in the joint Spanish-Moroccan declaration at the end of the meeting with Sánchez in Rabat, there is no mention of Ceuta and Melilla. On the other hand, Article 3 of the document refers to the “full normalization of the movement of persons and goods,” which “will be re-established in an orderly manner, including appropriate arrangements for land and maritime customs and control of persons.” Does this mean that Morocco will reopen the old Beni Ensar land customs, which was abruptly closed in 2018? It is possible, but not yet certain.

What is certain, however, and is written in Article 6 of this declaration, is that Morocco seems to be backing down on its claims to the territorial waters of the Canary Islands, since it talks about the reactivation of a “working group on the delimitation of the maritime spaces of the Atlantic seaboard (…) with the aim of making concrete progress.” This seems to indicate that Morocco will review the two laws that allow Moroccan territorial waters to overlap with those of Spain.

If there is a winner in this reconciliation, it is Morocco. Before his departure for Rabat, sources from Moncloa Palace, the official residence of the Spanish prime minister, suggested that Sánchez could return to Madrid with the famous document written and signed by the Moroccan authorities certifying the abandonment of claims on Ceuta and Melilla.

This did not happen and it shows a very strange ignorance of Moroccan mentality on the part of Madrid. Despite the geographical proximity, Spain does not seem to understand the spirit and temperament of the Moroccans. It seems not to understand that the next Moroccan objective is indeed the recovery of Ceuta, Melilla, and all those islands, islets, and rocks scattered on the Moroccan Mediterranean coast.

So, some may ask: why did the Spaniards give in so easily? The answer is because the Americans encouraged them to do so in line with the U.S. policy of recognizing Western Sahara as part of Morocco. Unless the Spanish are swimming in a pond of unconsciousness and incomprehension, Madrid has not only broken the old consensus on the Western Sahara but has also taken the risk of permanently aggravating Algeria, the main supporter of the Sahrawi independence fighters and above all the main supplier of gas to the Iberian Peninsula.

After the Spanish volte-face on the Sahara, Algeria recalled its ambassador in Madrid for consultation. The gesture was described by Spanish Minister of Foreign Affairs José Manuel Albares, as the expression of a “small temporary rage.”

This is not the case at all. Since this “little rage,” Algeria has suspended all repatriations of irregular immigrants arriving from Spain. It told the Spanish national airline Iberia that it would not allow it to resume flights to Algeria. Then, a few days ago, the president of the state-owned Algerian hydrocarbon company Sonatrach, Toufik Hakkar, announced that in this period of serious global gas crisis, his country would not increase the price of its fuel to its customers, except for Spain.

Madrid, which was Algeria’s main strategic partner in terms of energy, is losing this privilege to the Italians. Since the recall of the Algerian ambassador to Spain, visits by Italian politicians and businesspeople to Algiers follow one another at a frantic pace. On February 28, the Minister of Foreign Affairs Luigi Di Maio traveled to Algeria accompanied by a high-ranking delegation of officials from the energy giant ENI (Ente Nazionale Idrocarburi). On April 11, the President of the Council of Ministers Mario Draghi also visited Algiers, where he met with Algerian President Abdelmadjid Tebboune.

Apparently, at Moncloa Palace and the Spanish Ministry of Foreign Affairs, they still do not understand what is happening.