NATO needs a clear strategy to project the new normalcy. 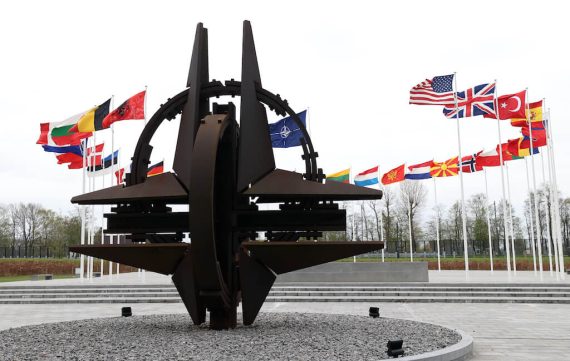 The flags of member countries of North Atlantic Treaty Organization (NATO) are seen ahead of NATO Foreign Ministers meeting at NATO Headquarters in Brussels, Belgium on April 6, 2022. Photo by Dursun Aydemir, Anadolu Images

The press statement of NATO Secretary-General Jens Stoltenberg after the NATO Summit on March 24 points out a strategy shift for the alliance after the Russian aggression against Ukraine. His speech was about: (1) NATO’s actions to respond to Russia’s further escalation challenging the borders of the alliance; (2) warning specific countries like China or Belarus not to support the aggression; and (3) outlining how NATO is providing support to Ukraine.

Apart from all these, Stoltenberg emphasized the need to strengthen NATO’s resilience to the “new normal” and to be prepared for further political-military escalations. Nevertheless, he did not specify what this “new normal” is.

The narrative of a “new normal” needs a threat projection and a portrayal of the security environment, and requires capacity and capabilities, and a clear strategy to comply with the described environment.

The global threat description in the last three decades is a matter of debate. The post-Cold War era is associated with the dissolution of multi-ethnic states, the need for a crisis management following the Soviet Union’s collapse, a power vacuum, and ambiguity emerging out of the unclear political visions of opposing actors.

The second decade after the Cold War

The second decade following the end of the Cold War was sealed by 9/11 when the United States’ “war on terror” and NATO’s activation of Article 5 for the first time in its history brought the alliance into Afghanistan. The missions of NATO units expanded to address non-state actors with regular military capabilities, specifically transforming NATO’s modus operandi to counter soft threats.

The third decade in the aftermath of the Cold War coincided with the Arab Spring. NATO was hesitant to get involved in the uprisings in the Middle East and North Africa after the Iraq and Afghanistan experiences, and failed to reach a consensus among its member states on Syria or Libya. The most outstanding feature of the last three decades was dealing with intangible threats, emphasizing emerging threat perceptions such as countering terror networks or cyber challenges, and leaving the care for conventional warfare behind.

The recent Russian aggression against Ukraine scrolled back the threat perceptions to the former conventional, symmetric, and regular threats. However, the “new” conflict environment and threat perception is, at least, four decades old! In this new reality, strategic weaponry and weapons of mass destruction (WMDs) may complement all these threat varieties with hyper combat momentum.

The security environment has been complex during the last three decades and will continue to be more complicated. The soft security threats of the last decade did not lower the momentum of military escalations where NATO is involved. For instance, the illegal refugee flow from war-torn countries was a matter of social security for NATO member states, forcing the alliance to closely monitor and control its frontiers.

Since March 2020, the COVID19 global pandemic has not stopped conflicts in the alliance’s vicinity, like in Syria or Libya. Moreover, NATO is still short of being prepared for the impacts of climate change on security concerns other than responding to, what I call, “2.0 threat types” that do not require military capabilities but compartmentalized professionals.

The Russian aggression and what has followed have added a new dimension to NATO’s normalcy whereby regional low-, medium-, or high-profile warfare may occur alongside the already defined postmodern threat perceptions. Instruments of conflict will continue to be a challenge for NATO like proxies, private military companies, auxiliary force multipliers (social media and cyber “civilian” extensions), and hybrid operations other than traditional conventional and unconventional threats.

The necessary capacity and capabilities to respond to the threats in a fragile security environment are more complicated for NATO. The alliance needs to have organic assets, proceedings, and more civilian capabilities mixed with military ones. NATO member states have their own abilities, but at the time of a crisis in the vicinity, member states become reluctant to share their arsenal due to national priorities. Hence, the alliance should review the “interoperability” pillar based on the expanding nature of future conflicts.

The alliance has the arsenal, formed by the contributions of member states—mainly the U.S. Yet, deployment and reinforcement to counter “new normals” will not be smooth without expeditionary capabilities. Such vulnerability requires enrichment and repositioning of the allied capabilities across the flanks per the prerequisites of geopolitics. In other words, NATO should prepare more than its member states to counter the threats both proactively and reactively with a fast pace.

Finally, NATO needs a clear strategy to project the new normalcy that will comply with the described threat types and security environments. NATO staff has drafted a new strategic concept to be approved by the summit to be held in Madrid in June 2022. The Russian aggression in Ukraine and the transformation of security threats will undoubtedly push the alliance to review the already drafted Security Strategy, which is the product of years-long efforts to meet the approval of all member states. The NATO strategy should be outlined in a document showing a will and vision to respond to global conflicts, not just regional ones.

What is more, this NATO strategy should include more compartmentalized civilian experts’ skills since the military has been insufficient in countering irregular threats. This new security strategy which comes after the pandemic and the Russian challenge to international security should be flexible, more integrated, and organic to NATO.

In addition, the collateral effects of regional and global conflicts appear more destructive than the conflict itself. For instance, the economic impact of the pandemic and Russian revisionism cannot be isolated from security threats of all sorts; yet, it needs to be integrated into NATO’s comprehensive response mechanism.

Another example of the collateral impact of conflicts on NATO is the obligation of member states to approach their widened and deepened security policies at the same time as the military-based collective defense system. Agricultural sustainability or energy interconnectedness cannot be isolated from a collective response to the threats facing NATO. Military victory requires resilience, hard power capabilities, and all sorts of national strength factors to augment the endurability of the allied states.