Even if a deal is reached, there is no guarantee that Iran's Revolutionary Guards’ military operations will decrease in the Middle East. 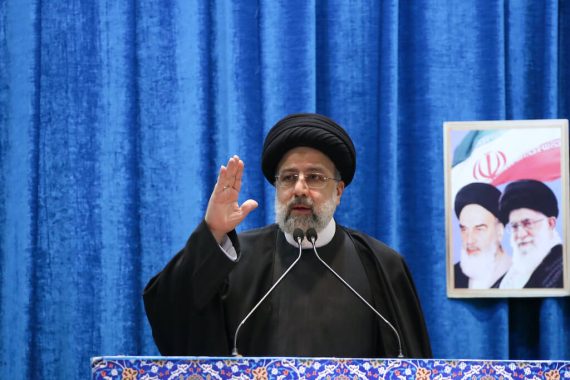 Iranian President Ebrahim Raisi delivers remarks on nuclear deal talks in Vienna, as part of the 43rd anniversary of Iranian Revolution, in Tehran in February 2022. Photo by Iranian Presidency

Even though the election of Joe Biden as U.S. president was interpreted as closing the bracket opened by the Trump era in terms of U.S.-Iranian relations, it is not easy to restore ties once they have deteriorated. After Biden took office in January 2021, the nuclear negotiation process with Iran did not start immediately and has been disrupted many times since then.

Nevertheless, the parties did not neglect to signal that they did not avoid negotiations. However, both sides acted much more cautiously following the developments in the Trump era, which resulted in the U.S. withdrawal from the 2015 agreement.

One of the first acts of the Biden government was to remove the Houthis from the list of Foreign Terrorist Organizations (FTOs). On February 12, 2021, U.S. Secretary of State Anthony Blinken announced that Houthis, one of the proxy groups of Iran operating in Yemen, would no longer be listed as “specially designated global terrorists” (SDGTs) as of February 16.

The Houthi movement, a.k.a. Ansar Allah, was designated as a terrorist organization in the last days of the Trump administration. The Biden administration was aiming for two possible implications by delisting Houthis: First, sending humanitarian aid to Yemen. Second, it would give Tehran a clear message that the new U.S. government was ready to negotiate and reach a new nuclear deal.

Read: Iran’s Proxies in the Middle East: A Halted Transition to Politics?

Although the United States joined the nuclear negotiations in April 2021, the negotiations stalled in May. The Iranian presidential elections, which took place in June, pushed the U.S. into a waiting position. Washington did not want to waste energy and resources for nothing. The new Tehran administration’s approach to nuclear negotiations was still unclear.

After Ebrahim Raisi was elected president in Iran in June, he had to wait until August to take over the post. Meanwhile, Washington was trying to gauge and predict the new Iranian government’s approach to the nuclear issue. The Raisi government’s initial remarks indicated that even though they were not against nuclear talks, they would negotiate from a harsher position than their predecessors. After a long delay, the nuclear negotiations were started again in November, and Iran did not negotiate directly with the United States.

That’s why the process was renamed nuclear talks between “Iran and P4+1 countries.” The European Union, Russia, and China have been trying to mediate between Tehran and Washington. However, both Iran and the U.S. do not exclude the option of direct talks in the future. Iranian Foreign Minister Hossein Amir-Abdollahian has said, “If we reach a point in the negotiation process where a good agreement requires a dialogue with the United States, we will not ignore it.”

For some time, the parties to the nuclear talks worked diligently to reach a solution. Although significant progress has been made in the negotiations, the outbreak of the Russia-Ukraine war has affected nuclear negotiations and changed many balances across the world. The emergence of Iran as an alternative energy source to Russia did not reveal an acceptable picture for the Moscow administration, which has been subjected to the heaviest sanctions in history.

Russia wanted written assurances from Washington that sanctions against it would not obstruct its economic relations with Iran. This demand stopped negotiations once again. After about ten days, Russian Foreign Minister Sergei Lavrov declared that they had “written guarantees” from Washington.

After the Russia problem was solved, there was still another big problem to overcome. The Iranian side is insisting that the Iranian Revolutionary Guards Corps (IRGC) should be removed from the U.S. FTOs list. Amir-Abdollahian said that without delisting the IRGC, there would be no deal. According to him, the IRGC issue is Iran’s “red line.”

Even if some political decisions were taken by previous U.S. governments, their effects were so profound that it was not possible to easily reverse them. Therefore, in some areas, it is necessary to proceed on the route drawn by the previous politicians. The inclusion of the IRGC, one of Iran’s official armies, on the list of FTOs by the U.S. is one of these decisions.

The decision to list the IRGC as a terrorist organization, taken by the Trump administration in April 2019 as part of its “maximum pressure” policy, had a symbolic meaning rather than a functional one. However, overcoming the symbolic walls is perhaps more difficult than solving the concrete problems between the two countries. Iran sees its nuclear program, the IRGC, defense capabilities, and missile technologies as matters of “national pride” above anything else. Whether it is Republican or Democrat, the U.S. administration always problematizes the existence of the Islamic political structure in Iran in terms of legitimacy.

After the U.S. IRGC terrorist listing decision, there was no active conflict between the U.S. army and the Iranian Revolutionary Guards Army. Moreover, before it was declared a terrorist organization, there were many sanctions against the Revolutionary Guards. The Biden government’s special envoy to Iran, Robert Malley, has declared that even if the nuclear deal is reached, the sanctions on the IRGC will not be lifted.

Furthermore, the latest IRGC attack on Arbil and the Houthi attacks on Saudi Arabia and the UAE only complicate the situation. Therefore, the nuclear agreement will not solve the IRGC problem, but removing the IRGC from the list of FTOs seems inevitable for an effective nuclear deal.

In Iran, the IRGC is part of a complex web of ties that extends from politics to the economy. It is a complex structure with numerous commercial firms, factories, financial institutions, and companies. This structure interferes with actual politics from time to time, and makes restrictive interventions against elected presidents or political representatives. The role of the IRGC in the determination of Iran’s foreign policy, and especially its regional activities, is also very important.

Hence, even if a new nuclear agreement is signed and the sanctions on Iran are lifted, it is highly unlikely that foreign investors who want to do business with Iran will somehow not touch the IRGC network and will not be the target of sanctions as long as the IRGC remains on the list of FTOs. Moreover, the fact that Iran’s official army is on the U.S. terrorist list weakens the possibility of Iran’s integration into the world economy as a legitimate actor.

Apart from all these factors, some outside actors also oppose the removal of the IRGC from the list of terrorist organizations. At the forefront of these actors are Israel and the UAE. Israel has taken a very harsh stance on the IRGC listing issue as well as opposing a nuclear agreement with Iran. Israeli Prime Minister Naftali Bennett and Minister of Foreign Affairs Yair Lapid said in their joint statement, “The attempt to delist the IRGC as a terrorist organization is an insult to the victims and would ignore documented reality supported by unequivocal evidence.”

The UAE has already been a target by Houthis, which the IRGC coordinates. Although there is no official statement from Abu Dhabi, some Israeli sources claim that they are not happy with the possible delisting. Even in Iran, controversial actors heavily criticize the IRGC and oppose the possibility of delisting it from the FTOs list.

Considering all these obstacles, it becomes clear why the Iran nuclear negotiations have been complex, and no result has been reached yet. Even if all challenges are overcome, it is very difficult for the agreement to be permanent under the changing political-military conditions. The fact that congressional elections are on the horizon in the U.S. and the Republicans are in an advantageous position is another factor that complicates the negotiation process.

If a deal is reached, there is no guarantee that the Revolutionary Guards’ military operations in the region will decrease. Indeed, Iran’s increased nuclear activities, uranium enrichment, and its stockpile will escalate tensions.