Removing Imran Khan from office by foreign intervention is a horrible joke on the dignity of a nation. 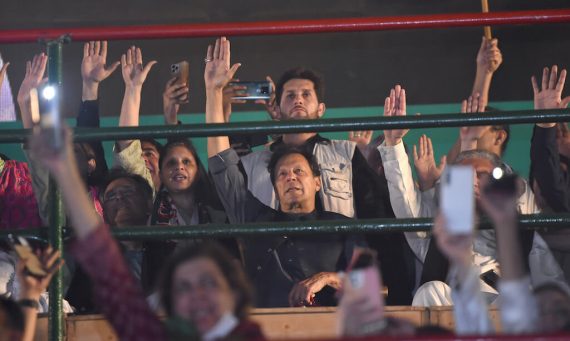 How far-fetched is it to believe that global powers – with purpose, capacity, and reach, embark on regime change? In fact, it is not just probable, but likely. From Mossadegh in Iran, Rousseff in Brazil, Gaddafi in Libya, or several U.S. orchestrated regime change operations in Latin America, this is nothing out of the ordinary. It is a reality hiding in plain sight, openly attributed to the concept of American exceptionalism.

Therefore, outright dismissiveness of this possibility in Pakistan – with the illegal, unconstitutional removal of former Prime Minister Imran Khan, is not just disconcerting, but contrived. Loud, boisterous proclamations condemning the accusation of regime change seem so phony – especially coming from scholars of political science.

“I’m haunted every day…by the lies I told,” writes American author John Perkins in his New York Times best-seller Confessions of an Economic Hitman. “I’m haunted by the payoffs to the leaders of poor countries, the blackmail, and the threats that if they resisted, if they refused to accept loans that would enslave their countries in debt, the CIA’s jackals would overthrow or assassinate them.”

In compelling detail, Perkins describes the ways by which U.S. hegemony privileges an elite minority in countries of the Global South to convince them to mortgage their country’s wealth and policymaking. Whether it is by highly paid professionals that encourage the target country to accept loans in order for “corporatocracy” to flourish, or by local ‘kept rajas,’ who manipulate local policymaking in service of their foreign masters.

The consequences are simple: forfeiture of sovereignty. For those who resist, a well-orchestrated plan erupts to engineer regime change – through character assassination, bribery, parliamentary manipulation or, if necessary, murder.

Today, Perkin’s powerful, ominous words are hauntingly familiar as Pakistan – a nuclear nation of 220 million people, has been thrown into political disarray. Why? A vote of no confidence, allegedly orchestrated by the U.S., has removed the fiery, incorruptible Imran Khan. All this due to alleged U.S. unhappiness with Pakistan’s independent foreign policy, refusal to condemn Russia, allow drone strikes in Afghanistan, and an ‘iron-clad’ brotherhood with China.

Read: Diverging Views on the Military’s Interference in Pakistani Politics

The crisis came to an upsurge with an official letter – minutes of a high-level meeting held in the presence of several people, that purportedly uttered threats and demanded PM Khan be removed. Then, as on cue, the kept state and its compromised institutions were miraculously activated to remove Khan. When that failed, the Supreme Court was asked to intervene. Absurdly, it ordered to reinstate Prime Minister Imran Khan so that opposition can remove him – which they did.

That didn’t go well with the people of Pakistan, and there were massive outpourings of support all over the country. At the root of this are the intersections of global hegemony and hostile manipulation of democratic processes in the Global South.

First, on March 7, 2022, prior to any formal submission of a vote of no confidence in Pakistan’s parliament, the Prime Minister’s office received the infamous ‘letter.’ To clarify, it’s an official communique with verbatim quotes from Donald Lu – U.S. Assistant Secretary of State for South and Central Asia. The letter’s tone, spirit, and writ are arrogant. It threatens, demeans, and demands regime change. Pakistan’s National Security Council, categorically, described it as ‘blatant interference’ in their internal affairs.

As is customary according to diplomatic protocol, Pakistan officially lodged a strong protest and summoned the U.S. diplomat in Islamabad to condemn the meddling. If this is not an unequivocal instance of foreign interference in Pakistan’s internal politics, then what is?

Secondly, Khan’s government persuasively argues that it’s not just the evidentiary nature of the letter, but the context from which it emerges. The opposition focus, and the Supreme Court judgement, both remarkably avoid any mention of foreign interference, horse-trading, politicians on bail for corruption – even murder. Nor do they honestly acknowledge the National Security Committee, who agreed that there was a blatant interference.

What about the clandestine Pakistan Tehreek-e-Insaf (PTI) dissident meetings with foreign diplomats? How about the recorded conversations with former National Security Advisor Moeed Yusuf with his American counterpart and instances of the clear hostile messages made to Pakistan’s outgoing Ambassador Asad Majid? All this has a direct bearing on the validity of vote of no confidence and Supreme Court decision.

After all, Khan’s government claims it has hard evidence of the horse-trading and bribery. If true, this is further evidence of an affront to the constitution and in clear violation of the rule of law. Is it not gross negligence, perhaps even treasonous, that neither the Supreme Court nor the opposition acknowledge this?

Third, in an unprecedented outpouring of grief, anger and determination, massive protests are occurring all over Pakistan. What is so inspiring is that these huge crowds were spontaneous. Millions of people across the country, in every major city, exploded in support of Imran Khan.

The powerful voices of hundreds of thousands of people were reverberating in the air with chants of ‘God is the Greatest.’ The chant means ‘there is nothing worthy of worship other than God’ and ‘the people will not accept an imported government’ – in clear reference to the new government being thrust on the people by foreign powers. Even Khan’s twitter account broke all records with over 160,000 people tuning in at the same time. It was nothing short of a spectacle.

This eruption of overwhelming popular mobilization screams to the world ‘we are not your slaves.’ It poses a direct, immediate threat to the teetering political order. And, this anger is not just directed at the opposition, but all those who facilitated this subjugation. Imagine the absurdity of asking someone to stand idly by as laws meant to protect society are being trampled by a privileged few. How could the judiciary allow murderers, traitors and convicted criminals abuse Pakistan’s parliamentary democratic structures in this way?

The Supreme Court’s bias is rightly being called out and their protestations seem so hollow and hypocritical. After all, the former head of Pakistan’s opposition, and newly minted Prime Minister, is himself on bail for corruption cases. It’s a strange, dystopic reality that has emerged.

Today, the overwhelming majority of Pakistan inwardly feel shame due the bizarre developments over the past few days. It’s not just that Imran Khan was removed from political office, but those who replaced him are the unethical, corrupt elite who do not represent the people. The new government is dominated by all those on corruption charges. In fact, 24 out of the 34 newly selected/imported cabinet are out on bail for various criminal offenses.

This is a horrible joke on the dignity of a nation. What makes this worse is that this imported government contains people who have previously viciously attacked state institutions, including the prestige of the army. As a result, demoralization, resentment, and anger is commonplace, which is feeding revolutionary fervor. This is a dangerous time for the people of Pakistan, and the powers that be must recognize this situation for what it is, and demand elections.

Farhan Mujahid Chak is an Associate Professor of Political Science at the Gulf Studies Program, College of Arts and Science, Qatar University.