The most significant impact of AUKUS on the MENA security complex is expected to be observed in the Eastern Mediterranean. 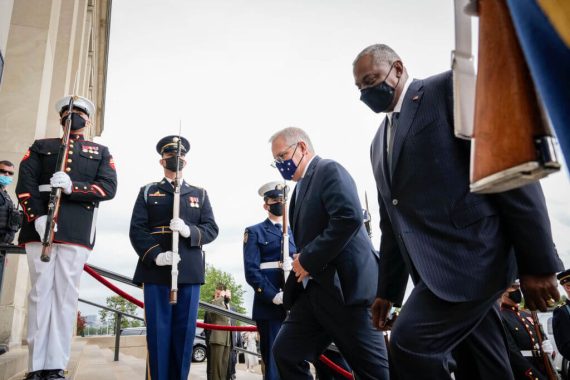 (L-R) Prime Minister of Australia Scott Morrison and U.S. Secretary of Defense Lloyd Austin walk past a military honor guard as they walk inside for a meeting at the Pentagon on September 22, 2021 in Arlington, Virginia. Last week, Australia, the United States and the United Kingdom announced a security pact (AUKUS) to help Australia develop and deploy nuclear-powered submarines, in addition to other military cooperation. Photo by Drew Angerer/Getty Images.

Since September 15, 2021 the global security agenda has been occupied with a security pact designed to pave the way for a technology transfer by the U.S. to Australia, replacing France as a supplier of nuclear-powered submarines. The argument goes that this strategic initiative is only the beginning of a much larger cooperation plan regarding the future of the Indo-Pacific security complex.

Global security analysts and scholars directly focused their attention on the Indo-Pacific Ocean and the South China Sea looking into possible implications. The pivotal argument is that world security is going to shift towards the East, and the U.S.-China competition will broaden itself into another dimension with this strategic step.

This claim holds certain validity as the U.S. retreat from Afghanistan and Syria should lead to the accumulation of a certain amount of tangible sources that will need another direction to flow into.

Thus, several scholars have been supporting the literature that hypothesizes a global U.S. channeling into the Indo-Pacific security complex. An alternative approach advocates that the U.S. is not entirely eager to interfere with China due to the potential implications of such a move, yet its partners are forcing a U.S. presence in the region.

This approach is an alternative that derives its legitimacy from the middle and great powers that cooperate with the U.S. – the superpower. This argument also has its merits as international relations are not solely the enforcement of the interests of a superpower but an interaction between the latter and its partnering countries.

The global understanding of such events represented in pacts such as the AUKUS Pact is vital. However, a regionalist approach is required to better present the impact on the regional and state-level dimensions. The French involvement in the pact is the part of AUKUS that is going to cause major implications for the MENA region.

The Australian government has made several procurement deals with France regarding nuclear-powered submarines which are the most up to date of their kind. The defense export and technology transfer contracts were argued to be over $60 billion – an impactful boost to the French defense industry.

It became evident during the COVID-19 outbreak that global security was broadening into other sectors and dimensions, which escalated the current security risks. These new risks led to higher expectations from security partners and eventually more impactful technology transfers, which will create more sustainable gains. All these parameters forced Australia’s hand to play it safe and collaborate with the superpower instead of searching for alternative and less binding sources of power.

Partnerships like AUKUS that will direct interstate partnerships and even enforce them to align. Recent military procurement deals such as the Turkish S-400 acquisition, the Pakistani JF-17 fighter aircraft production contract with China, Saudi-UAE procurements of F-35 aircraft, and THAAD air defense systems from the U.S. are recent comparable cases.

These procurements created different levels of leverage and tensions for the buyer countries as they were forced to choose a side. Despite the balancing literature and the conceptual history of the practice, it becomes more apparent that a bipolar system is very antagonistic in its buildup process.

Partnerships like AUKUS that will direct interstate partnerships and even enforce them to align.

Remembering the two world wars that created the Cold War structure, it is plausible that the “playmaker” states force certain great and middle powers with strategic geopolitical significance to align with them. In this sense, AUKUS might have created a rift between the U.S. and France (and the EU in a larger context, considering the UK also left the organization) that will have certain implications for the MENA region.

For the last 30 years, the U.S. was able to embark on its Middle Eastern policy vis-à-vis its European partners, but strategic gains that directly hinder EU profitability will cause certain fractions in this practice.

The most significant impact of AUKUS on the MENA security complex is expected to be observed in the Eastern Mediterranean. Since the EU has practically perceived the Turkish pivot for energy resources towards this area and North African interests in this area as threats, the U.S. has supported European interests in securing the energy routes and protecting the integrity of South European shores. However, a political dissemination process that was potentially started with AUKUS might divide this unification in foreign policy.

The Eastern Mediterranean is a quagmire of competing interests, and a transatlantic fracture will only escalate the situation.

The Eastern Mediterranean is a quagmire of competing interests, and a transatlantic fracture will only escalate the situation. This escalation might give middle powers like Turkey broader room for maneuver. If the U.S. stops supporting these interests in the region, the EU backlash and the hawkish French position will lose a certain share of their influence and capacity. A significant shift towards the Indo-Pacific Ocean might reduce the pressure on great and middle powers competing for interests.

VIDEO: AUKUS: Why Are France and China so Angry About This Pact?

An alternative power-centered approach might suggest that the void left by a U.S. strategic shift towards the East would trigger a great power to take responsibility and fill the vacuum. The current power balance propounds a Russian pivot towards the Eastern Mediterranean; however, Russia’s aircraft carriers are quite worn, and its only ship, Admiral Kuznetsov, is on the maintenance deck.

This does not mean Russia cannot control this area – it holds a submarine force of 58 known units which can only be challenged by the U.S. and maybe China in the next decade. Both scenarios imply that Turkey might have more room for maneuver with less focus and escalation from rival powers.

Meanwhile the possibility that France might become even more hawkish and hyper-emphasize its interests in the Eastern Mediterranean must not be excluded. Yet, this is less likely since if France and Germany plan to keep the union together, they have to align in foreign policy following Brexit. When push comes to shove, Germany will most likely balance the French hawkish reactionary stance towards these events and prioritize economic growth in the next decade.