The US decision to grant an exemption to India, which procured three times as many S-400 missile defense systems as Turkey, caused dismay in Ankara. 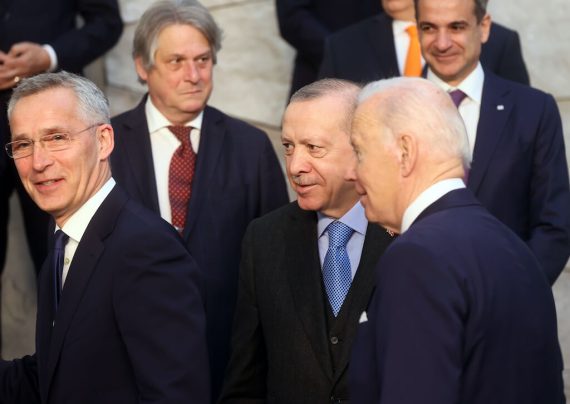 Turkish President Recep Tayyip Erdogan and US President Joe Biden arrive to attend a family photo session ahead of Extraordinary Summit of NATO Heads of State and Government in Brussels, Belgium on March 24, 2022. Photo by Halil Sağırkaya, Anadolu Images

As soon as the Joe Biden administration took office, Biden announced that his administration would embrace an institution-based approach in foreign policy. Thus, a period of Turkish-U.S. relations carried out at a presidential level, as was the case between Donald Trump and Recep Tayyip Erdoğan, was put on the shelf. In fact, this development has greatly reduced uncertainties stemming from both the unpredictability of the Trump administration and from its occasional hydra-headed nature. During Donald Trump’s presidency, Turkey-United States relations were quite problematic, to say the least.

The Trump administration supported projects that exclude Turkey from the Eastern Mediterranean natural gas equation, namely the Eastern Mediterranean Gas Forum and the East-Med project, and approved the creation of alliance zones that would limit Ankara’s presence in areas such as Syria and Libya. In addition, the Trump administration could not sufficiently refrain Congress on issues such as Turkey’s removal from the F-35 program and sanctions following the purchase of the S-400 air defense systems. With the Biden administration taking office, the expectation of a clean slate in bilateral relations between Washington and Ankara emerged.

What Turkey expects from the Biden administration

Ankara has many expectations from the Biden administration. These are: (i) U.S. support to the PYD in Syria to be cut off; (ii) concrete steps to be taken against the FETO terrorist organization; (iii) a reasonable approach to Turkey’s purchasing of the S-400 missile defense systems, and, thus, lifting of the sanctions imposed on Turkey as its exclusion, as a co-manufacturer of F-35s, from the program and not delivering two F-35 aircraft to Turkey—though these were paid for—under the pretext of Turkey’s S-400 procurement were seen as important mishaps; (iv) and, finally, compensation for Washington’s exclusionist moves against Turkey in its Eastern Mediterranean policy.

Read: The Geopolitics of Russia-Turkey Relations amid the Ukraine War

Contrary to Turkey’s expectations, security issues between Ankara and Washington could not be resolved in the first year of the Biden administration. Despite this disappointment, some positive expectations have emerged at the end of 2021 as a result of geopolitical pressures rather than positive bilateral steps.

First of all, when the Biden administration abruptly withdrew from Afghanistan, a decision which Washington could not explain to its Western allies and for which it was fiercely criticized, Biden couldn’t ignore Turkey’s constructive stance during the withdrawal process. Since then, the dormant dialogue between the United States and Turkey became active on a new Afghanistan-focused ground.

In fact, during the meeting between Biden and Erdoğan, which took place at the NATO Summit just before the U.S. decision to withdraw from Afghanistan, certain confidence-building steps were signaled. A partnership mechanism, which is planned to work as an important confidence-building measure, was established in a short time. Thanks to this mechanism, new potential crises in bilateral relations were prevented through ad-hoc meetings between delegations. This partnership mechanism is also expected to create an environment of dialogue to identify individual cooperation opportunities.

New geopolitics of the Eastern Mediterranean

A chief foreign policy item on the Biden administration’s agenda was the Pivot to Asia strategy, which was first voiced during the Obama administration as a deterrent strategy against the rise of China. In an attempt to concentrate all its energies on the Indo-Pacific, Washington is determined to reduce the American presence in the Middle East and to encourage its allies to take on the burden of their own defense.

The Biden administration considers taking advantage of the alliances built by Donald Trump in North Africa, the Middle East, and the Gulf to reduce security and defense costs. However, using Trump-era alliances has some limitations.

Take the Trump administration’s anti-Turkey view in the Eastern Mediterranean for example. This U.S. foreign policy outlook could not stand for long in the face of Ankara’s resistance both at sea and land. Likewise, many countries, which built alliances with certain expectations, could not obtain their desired outcomes.

Allies of the U.S. in the Eastern Mediterranean had to live with a possibility of facing an adamant Turkey as a security risk. This ultimately created a wave of disappointment among the alliance members which excluded Turkey. On the other hand, the withdrawal of the U.S. from Afghanistan and the challenges emerging in the aftermath of the creation of AUKUS strengthened the belief that the U.S. would abandon its allies.

Being tired of incessant geopolitical struggles since the Arab uprisings, regional actors in the Middle East decided to initiate a regional détente after finally facing the risk of being abandoned by the United States. In particular, the ongoing normalization of the relations between Turkey and the UAE, Turkey and Saudi Arabia, Turkey and Israel, and Turkey and Egypt have paved the way for the end of the polarization prevailing in the region during the Trump era.

This development also limited the United States’ flexibility to use its Trump-era alliances and facilitated reconsidering its former alliance structures more seriously. Thus, the NATO alliance emerged as the most viable option.

With the Russia–Ukraine war, the post-Cold War European security is experiencing one of its most serious crises. Both NATO and the United States are aware that the Ukraine war cannot be handled geopolitically in the mere context of the Black Sea, but through the Black Sea-Mediterranean connection. This traps Turkey in a dilemma: as a Black Sea country and a member of NATO, Turkey could have to make a choice between NATO/U.S. and Russia.

Diplomatic initiatives by Turkey that have so far shown to reduce tension in Ukraine have been appreciated by both NATO and the U.S. administration. It is important that President Erdoğan stated that Turkey can act as a mediator between Kyiv and Moscow, and that Ankara will fulfill its obligations as a NATO member in the Ukraine crisis. However, this statement certainly does not mean Ankara wants to take an anti-Russian position. On the contrary, Turkey wants to resolve the Moscow-Washington tension over Ukraine through diplomacy.

As the Ukraine war opens new channels of dialogue among the actors of the Western security architecture, so it sets a fresh ground of cooperation between Washington and Ankara. The United States has had to include Russia in its security radar in addition to China, and this new global power struggle forces Washington to consider two things: first, rethinking the former alliances that exclude Turkey as a NATO member, and second, using the recent political normalization wave that emerged between the countries on the Black Sea-Mediterranean line in favor of its global struggle.

In this geopolitical turbulence triggered by the Russia-U.S. polarization, it is almost impossible for Washington to stop Russia solely by its Greece-focused containment policy and to control the probable crises between Greece and Turkey, both of which are NATO members. Turkey has become an exceptionally important actor in Washington’s regional security design with vital geopolitical and strategic capabilities such as the Montreux Straits Convention, and the Kürecik Radar Station in Malatya, NATO’s second largest military force, in line with U.S. plans to contain Moscow.

As a matter of fact, forced by geopolitics, signs of change in the U.S.-Turkey relations appeared in the past few days.

The first signs of change in the U.S.-Turkey relations appeared with Washington’s decision to withdraw from the EastMed pipeline project, which Greece had convinced both the EU and the U.S. about through immense efforts. The second sign came from the newly appointed U.S. ambassador to Ankara, Jeffry Flake. Making a statement on the occasion of Ankara’s 70th anniversary of becoming a NATO member, Flake said Turkey’s contributions to NATO are now more important than ever, describing Ankara as a “critical ally.”

Turkey waits for concrete steps as geopolitics forces the U.S. to cooperate

Turkey still has security expectations from the United States. The decision by the U.S. administration and Congress to grant an exemption to India, which procured three times as many S-400 missile defense systems as Turkey, caused dismay in Ankara. If NATO adopts the idea of joint production of certain military capacities and technology sharing within the alliance, which was stated in the proposals made following the 2019 London Summit for NATO’s new Strategic Concept, and which will be announced in June, then this new situation would serve as a solution to alleviate the S-400 row between Turkey and the United States.

Indeed, before the acquisition of the S-400s from Russia, Turkey had repeatedly requested a supply of missile defense and technology transfer from its Western allies, especially from Washington. But all these demands were rejected, and the crisis resulted from Turkey’s purchase of the S-400s.

The Biden administration may be in favor of waiting until the 2023 presidential election in Turkey for concrete steps to enhance Turkey-U.S. relations, while Congress’s negative stance towards Turkey is likely to continue. However, the new global geopolitical turbulence is pushing the two old allies towards a new, perhaps, passive cooperation.