The public opinion and political will in both Sweden and Finland are in favor of joining NATO. 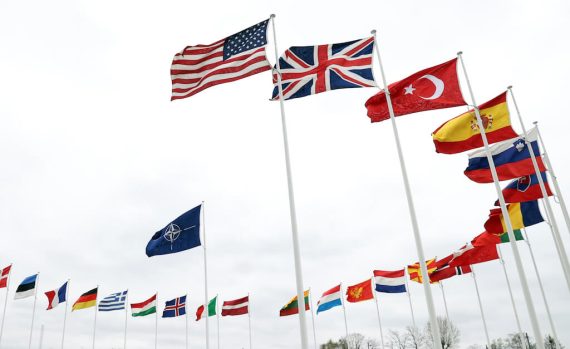 The flags of NATO member countries are seen ahead of NATO Foreign Ministers meeting in Brussels, Belgium on April 6, 2022. Photo by Dursun Aydemir, Anadolu Images

The Russian invasion of Ukraine stirred up debates and policy decisions regarding defense and security, especially in Europe. Many countries made decisions to increase military spending. Recently, Finland and Sweden, which traditionally take an approach of non-alignment and military independence, face predicaments of policy change with respect to their pacifism and the historic decision of joining NATO.

The Russian aggression and the growing public concerns put pressure on the governments of Sweden and Finland to join NATO. Finland, which shares a border with Russia, seems to be treating the situation with more urgency and plans to join NATO as soon as the summer of 2022. Sweden, which was taking a more cautious path towards membership, also seems to be in favor of following in Finland’s path.

According to local media the Nordic countries will submit their NATO application simultaneously in mid-May, likely the week of May 16. Finnish Minister of Foreign Affairs Pekka Haavisto commented that no fixed date has been set but that it would be “useful” for the bid to launch in conjunction. On April 25, Finnish media Iltalehti reported that suggestions from the Swedish leadership about submitting the applications at the same time had met with agreement from the Finnish side, providing Sweden goes ahead with its plan to join NATO.

Why are Sweden and Finland neutral states?

Historically, Finland has been a buffer state. Until the Russian Imperial Army annexed it in 1808, Finland was a part of the Swedish Kingdom. It remained an autonomous buffer state for a century under the Russian Empire, known as the “Grand Duchy of Finland,” and declared independence during the Russian Revolution in 1917. During the interwar period, relations between Finland and the Soviet Union were tense. Later, during World War II, Finland was regarded by the Soviet Union and Nazi Germany to be under the Soviet sphere of influence.

Sweden was a historically non-aligned country and stayed out of both world wars. Although Sweden saw the Soviet Union as a threat and cooperated with NATO during the Cold War period, the country opted for military independence and stayed out of the alliance. It joined the EU the same year as Finland.

Sweden and Finland’s road to NATO

Sweden and Finland advanced their ties with NATO with the Partnership for Peace Program (PfP) in 1994, and both countries have participated in NATO joint military exercises to develop interoperability. Until now, the two countries considered joining such alliances a step too far. Their cooperation with NATO including participation in such exercises increased in 2014 when Russia annexed Crimea from Ukraine. The same year, the two countries signed an agreement with NATO allowing it to operate on Finnish and Swedish soil in case of a conflict.

Most recently, in late March, joint military exercises of 27 NATO countries in addition to Finland and Sweden took place in Norway featuring 30,000 troops. Military exercises are conducted regularly and the recent one was planned before the Russian invasion of Ukraine. However, Lieutenant Colonel Stefan Hedmark of the Swedish Armed Forces highlighted the event’s elevated importance this year because of the Ukraine crisis.

EU membership already implied the end of political neutrality, but the countries now seem to be expecting more in terms of security. Sweden and Finland wrote a joint letter to the EU on March 8 reminding it of the solidarity clause in the Treaty of Lisbon.

The clause declares that if a member of the EU was to be the victim of an armed aggression on its territory, other states have an obligation of aid and assistance by all means in their power. However, the EU is not a military alliance, and the scope of the clause is unclear. Sweden announced that it would increase its defense spending, while Finland is planning a similar action.

Remaining outside of the NATO umbrella— similar to Ukraine—and observing NATO’s limited response to the Russian invasion of Ukraine have provoked Sweden and Finland to rethink their military neutrality and non-alignment policy. With their foundation from earlier training programs, the integration of Finland and Sweden to NATO will not be difficult. Both the U.S. and NATO have given positive signals that their membership request would likely be accepted swiftly; however, the admittance process may take four months to a year. It is also unlikely that the countries would face difficultly fulfilling the unanimous vote requirement to join NATO.

Public opinion and political will in both countries favor NATO membership

The public opinion and political will in both countries are in favor of joining the military alliance. In Finland, the public that had been uninterested in joining NATO now see its importance. Opinion polls show that more than 60% of Finns favor joining NATO, a figure that had remained at 20-30% before the war in Ukraine. In the upcoming weeks, Finland is to come to an official decision as well as an outline to its path to joining NATO.

The ruling party in Sweden, the Social Democrats, released a statement that read, “When Russia invaded Ukraine, Sweden’s security position changed fundamentally.” The party’s position is in favor of following in Finland’s path in terms of NATO membership. However, the Swedish government will face general elections in September 2022 and may want to avoid voter alienation by making such a drastic change, and, therefore, has been treading a more careful path in the past weeks.

Swedish newspaper Svenska Dagbladet reported earlier in April that Magdalena Andersson, prime minister of Sweden, was planning to apply for membership in time for a NATO summit in late June. A poll on April 20 showed that the percentage of Swedes that are in favor of joining NATO went up from 51% in March to 57%, those opposing fell to 21% from 24%, and undecided votes decreased to 22% from 25%. This shows more certainty among the public as Russia increases its threats.

The expansion of NATO was essentially the situation Russia wanted to avoid. Dmitry Peskov, the Kremlin spokesperson, stated that the NATO alliance remained a tool towards confrontation and its expansion would not bring stability. Moscow threatened to readjust the balance at the border and reposition nuclear weapons in the Kaliningrad region between Poland and Lithuania if Finland and Sweden joined NATO (nuclear installations in the region already exist).

Dmitry Medvedev, deputy chairman of the Security Council of Russia, also mentioned that Russia would have to strengthen its land, naval, and air forces in the Baltic Sea.

For now, the accession process of Sweden and Finland to NATO is set to heighten tensions, but the possibility of direct confrontation from Russia is unlikely given that its troops are allocated to Ukraine. Still, nuclear buildup in the Baltic puts the region on edge.