NATO’s Baltic members have long been far more alarmist about the Russian threat than those in Western Europe. 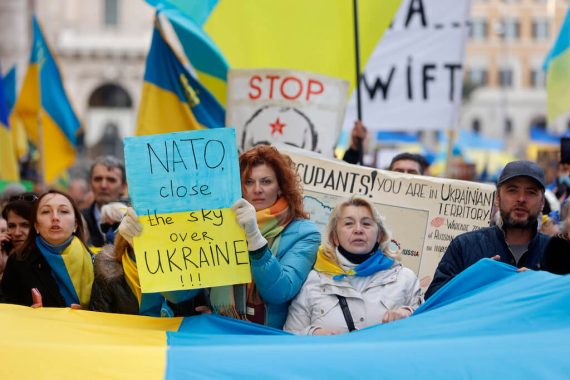 Ukrainians attend a demonstration against the Russian attacks of their country, in Rome, Italy, on February 27, 2022. Photo by Riccardo De Luca, Anadolu Images

It was not long ago when NATO’s divisions were running deep. Until recently, many in the West were questioning the security alliance’s purpose.

As a presidential candidate in 2016, Donald Trump said that if Baltic states weren’t “paying their bills” the U.S. shouldn’t necessarily protect them from Russia notwithstanding treaty obligations. In 2019, French President Emanuele Macron asserted that NATO was “becoming brain-dead”. The following year, tensions between Greece and Turkey led some experts to conclude that NATO was “paralyzed”.

At that time, 70 percent of Turkey’s population saw the U.S., NATO’s dominant military force, as a threat to their country. Many voices in the West accused Germany of being a “shaky alliance partner” and “NATO’s biggest freeloader.”

But Russia’s invasion of Ukraine on 24 February was a geopolitical tsunami that fundamentally changed the strategic stakes for NATO members. Amid drastic changes in Europe’s security architecture, the Western alliance has regained a sense of purpose. Today NATO is more unified and cohesive than it ever has been since the Soviet Union’s implosion in 1991.

“Threat is the glue that binds together a security alliance,” explained John Feffer, the director of Foreign Policy In Focus, in an interview with Politics Today. “When the threat increases–and there is a consensus on the nature of the threat–the alliance necessarily becomes more cohesive. Russia’s invasion of Ukraine has served to smooth over a number of disagreements within the alliance.”

The Ankara-based Foreign Policy Institute’s Dr Tarik Oguzlu wrote that “as we witness NATO’s European members awaking from their geopolitical hibernation, NATO is almost returning to its founding mission.”

The war in Ukraine quickly led to a “revolution in German military affairs” with Berlin now committed to a hike in defense spending. The Germans put Nord Stream 2 pipeline on hold. Berlin is also arming the Ukrainian resistance with lethal weapons despite previously opposing NATO’s militarization of Ukraine.

For decades, a handful of Western countries accused Italy of being too Russia-friendly. But for the past two months, Italy has taken a strong stance against Vladimir Putin’s invasion of Ukraine. Now closely aligned with the Transatlantic alliance against Moscow, Rome has supported sanctioning Russia. As Italy’s Prime Minister Mario Draghi put it, Italy responded to the President of Ukraine’s appeal for weapons because “it’s not possible to respond only with encouragement” when a democratic country comes under attack.

Talk in western capitals about kicking Turkey out of NATO has basically come to a sudden end. There has been somewhat of a rebound in Ankara-Washington relations as Turkey arms Kiev with Baykar TB2 drones. Based on shared concerns about Moscow’s conduct in Ukraine, Greece and Turkey have found common cause since 24 February.

NATO’s Baltic members have long been far more alarmist about the Russian threat than those in Western Europe. But such East-West divisions within NATO are going away. “Western politicians are now saying to us, you were right,” Arvydas Anušauskas, Lithuania’s Minister of National Defence, told Al Jazeera.

Since 24 February, NATO members “have rallied together and acted quickly with new defence and deterrence measures such as activating the NATO defence plans, activating elements of the NATO Response Force, and approving the deployment of four new multinational battlegroups in Eastern Europe,” Mihai Chihaia, a policy analyst at the Brussels-based European Policy Centre, told Politics Today.

“Reinforcing the Eastern flank has been a top priority and the Allies have shown a very high degree of solidarity. In addition, the strong commitment to Article 5 (mutual defense) has been constantly reiterated.”

NATO is not only becoming more unified because of a growing common threat perception of Russia. The security alliance might be on the verge of expanding its membership. Sweden and Finland appear close to abandoning their decades-old foreign policy tradition of neutrality and entering NATO. Finland doing so would add 810 miles to the border between Russia and NATO members.

“If Sweden and Finland join, NATO’s presence and coordination in the Baltic Sea area, as well as more broadly in the Nordic and Arctic, will be strengthened, together with NATO’s defense and deterrence posture,” said Chihaia. “Their armed forces would be an asset to the alliance as both Sweden and Finland have been close partners for years, they have invested in modernizing their armed forces, and there is a high degree of interoperability and adherence to NATO standards.”

This deeply alarms Moscow, which has been warning Stockholm and Helsinki about political and military consequences. “Russia has threatened to place nuclear weapons in its Kaliningrad enclave if Finland or Sweden join,” explained Feffer.

“[Russia] has threatened to increase its military presence in the Baltic region to deal with NATO’s extended border with Russia if Finland joins. But I’m not sure that the security architecture will change that much. Sweden and Finland are not members of NATO, but they have coordinated with the security alliance for some time. Russia, meanwhile, has reportedly already placed nuclear weapons in Kaliningrad (according to the Lithuanian government). But it does mean that the space for neutrality in Europe is shrinking,” Feffer added.

The Orban and Le Pen Factors

There are some limits to NATO’s unity, which brings us to Hungary. With Prime Minister Viktor Orban at the helm, Hungary is the Western alliance’s most Russia-friendly member. In the past, he has hailed Russia as a model for his “illiberal” country.

Although Budapest did not veto EU sanctions on Moscow following Russia’s invasion of Ukraine earlier this year, Orban has vowed to block EU sanctions on oil and gas from Russia. The Hungarian leader has also opposed demands to halt the expansion of the Rosatom-financed Paks Nuclear Plant. As the leadership in Budapest sees it, Hungarian citizens should not be burdened by costlier bills because of energy sanctions against Russia.

“Hungary is the problem child of Europe because of the ties [that Russia maintains with] the Orban government. As long as [Orban] is there, Budapest will be a problem,” Dr Theodore Karasik, the former Senior Political Scientist in the International Policy and Security Group at RAND Corporation, told Politics Today. Nonetheless, Budapest is not defending Russia’s violations of Ukrainian sovereignty. “It’s important to note that Orban is not siding with Russia here,” as Feffer pointed out. “He has condemned the invasion.”

Orban believes that he has the diplomatic abilities to navigate good relations with Moscow. Yet escalating tensions between Hungary’s fellow NATO members and Russia is testing Orban’s doctrine of “strategic calmness” vis-à-vis the Kremlin. Depending on how the Russian-Ukrainian war pans out, Hungary could find itself increasingly isolated within Europe.

There is also the question of what happens to NATO if Marine Le Pen wins the second-round runoff in France’s presidential elections. Her victory would constitute a major blow to the Western alliance, especially mindful of the fact that Le Pen has signaled her support for France leaving NATO’s integrated military command as well as a strategic rapprochement between the West and Moscow.

Although this year Le Pen has condemned Russia’s violations of Ukraine’s territorial dignity, Feffer described her as “one of Putin’s greatest cheerleaders in Western Europe” who “would likely push to water down sanctions and reduce EU military support for Ukraine” if she defeats Macron.

“Le Pen is Russia’s ace in the hole and [she] needs to be watched and understood very carefully” considering how her “connections to Moscow can stymie NATO policy actions by acting as a major distraction,” explained Dr Karasik.

According to Chihaia, “if Le Pen wins, EU defense initiatives will be negatively impacted and there will be significant difficulties to move forward.” He emphasized that her victory could have major ramifications for Paris-Berlin relations. “The Franco-German joint defense projects might be stopped. The Franco-German ‘engine’ for developing European defense, essential in moving forward with strengthening European defense capabilities and structures, risks to be halted.”

Boxing in the Bear

Regardless of how Hungary and possibly France will serve to undermine NATO unity, there is no denying that drastic shifts have taken place within the security alliance since 24 February. NATO finds itself with a renewed purpose. This bodes negatively for Russia. Having viewed NATO’s eastward expansion as a growing threat, Moscow must contend with how conditions in Ukraine are tightening the Transatlantic alliance in truly remarkable ways which were difficult to imagine only a few months ago.

Putin’s government is in no position to easily or quickly reverse this move toward much deeper coordination and solidarity among NATO’s members. In Dr Karasik’s words, “the mistakes by the Russians and the emergence of the Z campaign are helping to unite NATO in a way that’s going to box in Russia for decades.”