The alliance-forming process between the AK Party and the MHP also revealed another tangible outcome of the presidential system: reconciliation between political parties in a different form other than a coalition in the parliamentary system. 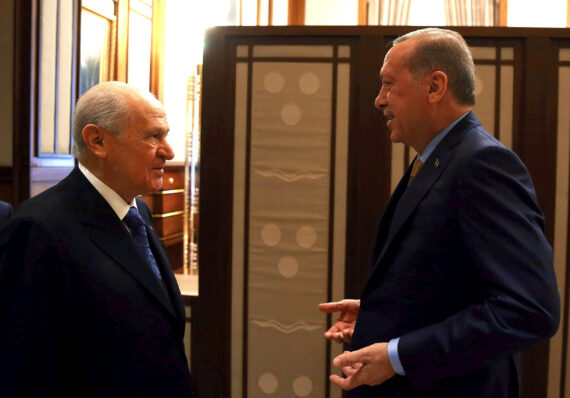 During his press statement on January 8, 2018, Nationalist Movement Party (MHP) leader Devlet Bahceli clarified certain ambiguities surrounding the 2019 elections that were the main items on the political agenda. In this statement, Bahceli announced that MHP would not nominate any candidate, but support President Recep Tayyip Erdogan in the 2019 presidential elections. More, MHP leader highlighted that his party is open to alliance with Erdogan’s AK Party for the parliamentary elections as well. This alliance, it was suggested, should be implemented into a legal framework, allowing parties to maintain their corporate identity and to identify the percentage of votes each party receives. President Erdogan responded to MHP’s call positively, which then led to the two parties establishing their own alliance commissions.

With this, Devlet Bahceli carried out the AK Party-MHP alliance, which was formed after the July 15 coup attempt and which aimed to ensure the survival of the state, on to a next level. This was a requirement necessitated by the presidential system, as political parties have to seek alliances in order to secure the election. Therefore, after party-member presidency, the political reflections of the presidential system began to be apparent on the road to 2019.

The content and political implications of the presidential system were not discussed during the referendum campaign due to the manipulations of the opposition, refusing to allow people to understand the importance of this political transformation in terms of democratization. For instance, the “no” bloc distorted the truth about certain amendments, such as decreasing the age to be eligible for parliamentary candidacy to 18 or increasing the number of deputies to 600. Moreover, opposition leader Kilicdaroglu claimed that the 4 million Syrians who are seeking refuge in Turkey would be naturalized if the referendum succeeded. These kinds of manipulations obstructed the essence of this new system and the political implications it would bring from being understood.

Analyzing the developments in Turkish domestic politics, it becomes obvious that political parties are experiencing changes brought by the presidential system. As it is known, a simple majority is sought in the presidential elections and this condition will shape Turkey’s political landscape.

First of all, the simple majority factor renders political and social reconciliation inevitable. In the new era, political parties will be inclined to be more inclusive, agreeable and appealing to voters. In this respect, “bloc politics” foreseen by the new system enforces political reconciliation instead of polarization. Thanks to these political blocs, the public will observe which parties are working with each other and will decide accordingly. Therefore, the success of the alliance political parties will form in the presidential system is to be determined by their appeal to the public.

In terms of seeking reconciliation and alliance that is brought by the new system, the AK Party and MHP have agreed on national stance and an alliance that appeals to the majority of the public. Considering this alliance, it could be asserted that the MHP is pursuing a realistic political stance. The party sought to transform its existing cooperation with the AK Party into an alliance since the July 15 coup attempt. Bahceli’s statement about being true to the “Yenikapi spirit” and desiring to incorporate the new system is the most important indicator of this. MHP is aware of the necessity of adopting a national unity discourse amid global and regional conflicts and that this discourse appeals to the public.

What caused MHP to depart from its previous bloc was the failure of this bloc to maintain a national stance, which inevitably discomforted the public. In other words, unlike the other bloc consisting of the Republican People’s Party (CHP) and Peoples’ Democratic Party (HDP) along with several smaller parties, which prefer to cooperate behind closed scenes, the AK Party and MHP are conducting their alliance negotiations transparently thanks to its public consent.

No coalition but pre-election alliance

While the public only observes coalition negotiations in the parliamentary system after casting votes, the presidential system allows the public to shape alliance discussions between political parties. This is due to the fact that alliances have to be formed prior to the elections. If the agreement is only among political elites, the public may punish their political parties by not voting for them. Therefore, the AK Party and MHP are conducting their alliance negotiations transparently and prior to the election, accepting to face any repercussions in the case of public dissatisfaction.

Coalitions formed under the parliamentary system do not necessarily allow the public to know which party will have executive power. However, in the case of the AK Party-MHP alliance, the public is aware that Erdogan will maintain executive power if he is elected. In addition, even if MHP withdraws its support from the AK Party after the elections, it will not create a political crisis, as it would do in a parliamentary system.

The process between the AK Party and MHP reveals only a part of the reconciliatory aspect of the presidential system. If the president’s party fails to secure a majority in Parliament, the President will be inclined to reconcile with other parties that possess seats. If the AK Party fails to secure a majority of seats in the 2019 elections, its alliance with MHP will most probably permeate the Parliament as well. Indeed, Bahceli clearly stated that his party will do all that is required to render the new system permanent in 2019-2024 period.

In this sense, the presidential system enforces pre-election alliances, not government coalitions. These alliances will reveal the political blocs indicating social reconciliation rather than social polarizations. Considering its voter base, it had been inevitable for MHP to become party to a different bloc. Meanwhile, the discourse on national unity, which has gathered support by the general public and which is shared by the AK Party has allowed MHP to leave the “no” bloc and join powers with the government.