Right now, in the South China Sea, there are many opposing militaries and merely one mistake could lead to disaster. 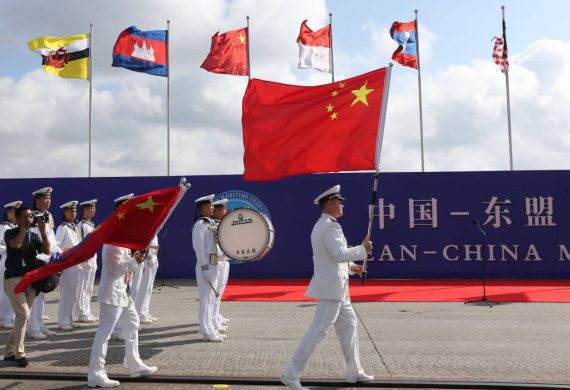 The photo shows Chinese sailors marching during the opening ceremony of the ASEAN-China Maritime Exercise at a military port in Zhanjiang, in China's southern Guangdong province on on October 22, 2018. Photo by STR, AFP via Getty Images

Many of the old Western imperialist powers are taking part in a new scramble: this time not for Africa, but for hegemony and influence in the South China Sea. In a surprise announcement on September 15, 2021, the United States, Australia, and the United Kingdom formed a new strategic partnership for the sharing of weaponry (in particular nuclear submarine and cruise missiles) and security-related cyber technology, with the main recipient of new weapons expected to be Australia. Dubbed AUKUS, this new alliance will purportedly “protect shared values and promote security and prosperity in the Indo-Pacific region.”

Like the Quadrilateral Security Dialogue, commonly known as the Quad, an alliance bringing together the U.S., Australia, Japan, and India, none of the official statements of the AUKUS alliance mention China by name. And yet, like the Quad, the intentions of AUKUS are transparent: to maintain military and economic hegemony over the South China Sea, and over China in general. In other words, to keep China in its place, through brute force if necessary. Though how AUKUS and the Quad will co-ordinate remains unclear, there is little question that the provocative joint military exercises taking place under the rubric of the Quad will be expanded to include the AUKUS framework as well.

The inclusion of the UK in AUKUS has raised some eyebrows, since the country has hardly been a Pacific power since World War Two. However, the entire Brexit narrative has been based largely on imperialist fantasies of Britain returning to its “rightful” place as a global powerhouse, perhaps cajoling pesky natives into lucrative – for Britain – trade deals through gunboat diplomacy. There have been calls by influential UK politicians (backed by the former Japanese prime minister Shinzo Abe) for the UK to be a “major democratic counterweight” to China in the region, and a major review of foreign and defense policy in March 2021 centered on a shift to focus resources – diplomatic and military – on the Indo-Pacific.

Britain also sent an aircraft carrier to the South China Sea, essentially to join the game of intimidating China. Of course, the glory days of Queen Victoria are long over, and the notion that the current UK could accomplish much of anything on its own is somewhat fanciful, so a military alliance with the U.S. and Australia makes sense from that perspective. It should also be noted that the three AUKUS countries, together with Canada and New Zealand, are part of the Five Eyes alliance for intelligence sharing, which includes unsavory activities such as spying on each other’s citizens through monitoring of internet communications.

Even Germany has thrown its hat into the South China Sea ring, sending a frigate to the region.

France has also been flexing its muscles. In 2021, the country participated in joint military exercises in the region with Japan, the U.S., and Australia, dispatching warships to – where else? – the South China Sea. Indeed, the very birth of AUKUS was part and parcel of an imperialist game between Britain and France, with Australia abruptly cancelling a large French contract for submarines and switching to a British manufacturer. A diplomatic row ensued, with the French accusing the AUKUS countries of “betrayal” and even recalling their ambassadors to the U.S. and Australia (Britain was deemed not worth the trouble).

However, while all of that made for entertaining news, at the end of the day it was a sideshow compared to the much more important goal of beating the war drums. Even Germany has thrown its hat into the South China Sea ring, sending a frigate to the region. However, the Germans were easily snubbed by China, which refused the warship entry into a Chinese port.

Japan, a key player in all of this, has openly urged the EU to increase its military presence in Asia to counterbalance China. And, of course, Taiwan has been fueling the fire to the best of its ability, with near daily statements regarding the allegedly near imminent invasion of the island by Chinese forces. Taiwan has reportedly borrowed a leaf from the Israeli playbook, funding think tanks in Washington, D.C. and Australia to ensure that rhetoric about the purported threat of China remains prominent.

If all this looks familiar, it should – and to nobody more than the Chinese. China has not forgotten (nor should they forget) the countless infringements of sovereignty they endured at the hands of Japan and the Western powers for decades. All Chinese schoolchildren learn the history of the “Century of Humiliation,” and are taught that China must be modern and strong in order to ensure the humiliations are not repeated.

Whether this education is overly nationalistic is arguable, but it is probably preferable to the whitewashing of imperialistic atrocities that takes place in schools in Japan, Britain, the U.S., and other countries. This is not to defend the oppressive practices of the Chinese government, or to agree with their claims over Taiwan or any of the other disputes in the South China Sea. It is to say that China is right to be suspicious of Western intentions. 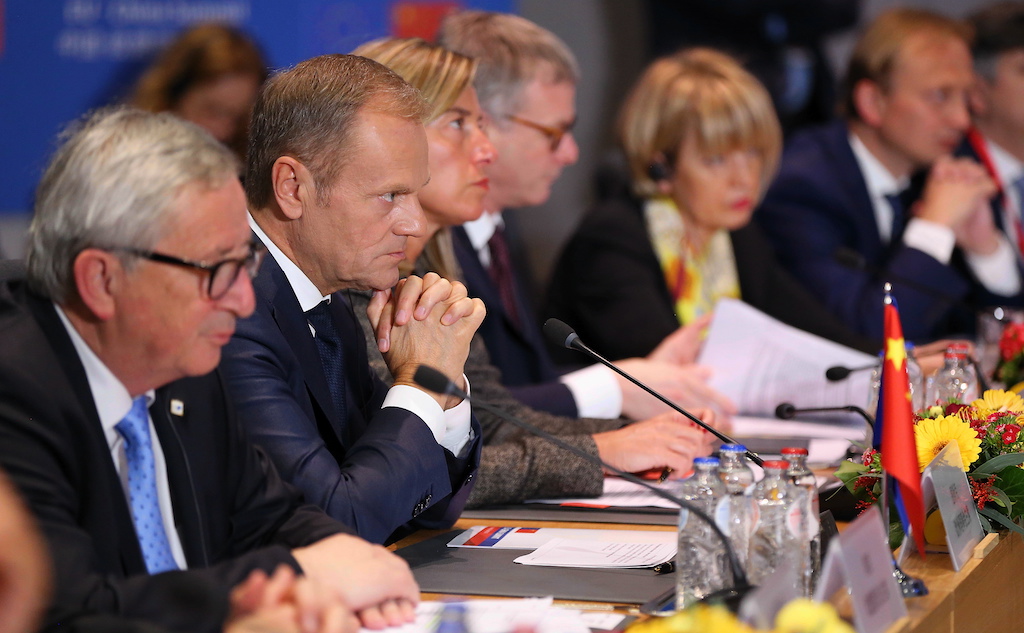 Defenders of the “rules-based” order

Certainly, the most insulting idea advanced by the countries attempting to contain China is the notion they are defending the “rules-based order” in the South China Sea. In this narrative, China is the “rule breaker,” flouting the accepted laws and customs of international society. China is portrayed as a rogue state, going against international norms and the rule of law itself. The white knights of the West have arisen, not to protect their own selfish interests, but to defend those laws and rules, and champion the “fair and open” international order.

Even the openly provocative passages of Western warships in the area are euphemistically called “freedom of navigation” missions – one can imagine how the U.S. would react to Chinese warships conducting military maneuvers close to its shorelines. These blatantly biased narratives are repeated ad nauseam, not only by the governments themselves, but also by a compliant press. Unable to point to any specific violation, the media uses vague terms such as “increasing assertiveness” to describe Chinese behavior, as if that were a crime. In Japan, the right-of-center press has even resurrected the Cold War term “Free World” to juxtapose itself and the West against China.

The international system is indeed a “rules-based order,” based on laws and norms. In particular, the Charter of the United Nations proclaims the equality and sovereignty of all nations, and prohibits the use of force outside of situations of self-defense. It should be stressed that even then it is only until the Security Council decides on a course of action.

It is hardly controversial to note that the U.S. (and its allies) have openly broken these norms on a huge number of occasions, with catastrophic results for the people on the receiving end. The invasion of Iraq, the destruction of Libya, and ongoing military intervention in Syria are just some of the more egregious examples of U.S. violations of international law in recent years.

The ostensibly liberal government of President Biden thinks nothing of announcing that, even after the 20-year U.S. occupation of Afghanistan came to an unceremonious end, the country will continue the “war on terror” using “over the horizon” means, i.e., illegal bombing with drones and other air-based weapons. The so-called liberal U.S. press practically mounted a concerted campaign to stop the U.S. from pulling out its troops from Afghanistan, claiming the war on terror could not be effected without “boots on the ground.”

The U.S. thumbing its nose at international law is hardly a new phenomenon, and is not confined to the “war on terror” framework.

The U.S. thumbing its nose at international law is hardly a new phenomenon, and is not confined to the “war on terror” framework. The U.S. has intervened openly or covertly in many countries in Latin America, including Cuba, and imposes crippling sanctions on Venezuela. And continuing lavish support for countries that truly do deserve the “rogue state” label, such as the apartheid state of Israel, make a mockery of U.S. claims to be upholding international law.

Of course, the U.S. is hardly the only country that violates international law, and the notion that international law is observed more in breach than in observance is far oversold. Nevertheless, that does not detract from the main point: it is the U.S. and its allies that are being aggressive in the South China Sea, and China is completely justified in being apprehensive of the encirclement of the country by seemingly hostile navies.

Though the current tensions between the West and China are often called a “new Cold War,” there are of course important differences with the past Cold War with the Soviet bloc. Probably the most important one is the extensive economic interdependence between China and the West (and the rest of the world). Even as they rattle their sabers, Western countries are mindful that they rely economically on China, as a manufacturing base and increasingly as a market.

Indeed, China is the main trading partner for the U.S., Japan, and the EU as a whole. A real shooting war would be an unmitigated disaster for the global economy: a fact well understood by business interests that wield great influence over Western governments. That may not make a real shooting war inconceivable, but it definitely does make it difficult. Much of the current rhetoric, in particular in Japan, is a result of pandering to nationalistic constituencies, and of attempts at justifying bloated military budgets and arms sales.

The problem is that, once nationalistic furor is inflamed to this extent, it can very easily get out of control. Right now, there are many opposing militaries in a small space, and merely one mistake could lead to disaster. The West will have only itself to blame if it does. 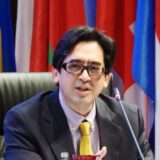