A total of 486 incidents of violence against Christians in India were recorded in 2021, representing a 75 percent increase on the previous year. 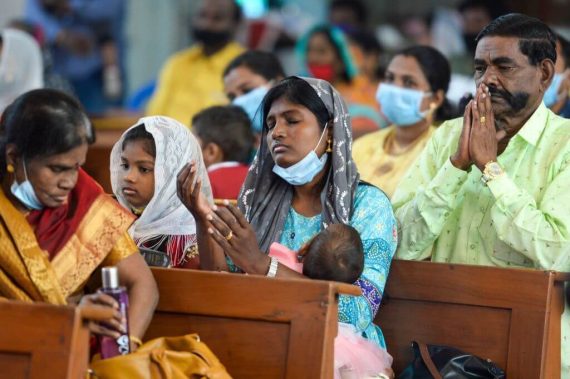 For India’s religious minorities, 2021 has been described a “year of fear” and “annus horribilis,” after the country experienced an unprecedented level of communal violence, but what makes the previous year stand out from others during the Narendra Modi era is the way in which Christians have come under increasing pressure and attack.

While attacks against Muslims have become the norm since 2014, with Hindu nationalist leaders and hate preachers openly urging genocide, as mobs belonging to fringe Hindu organizations, such as Bajrang Dal, hunt and lynch Muslims in the streets – the country’s 25 million Christians had, until now, been spared the worse of what has become a government backed effort to transform India into a Hindu-only nation.

These radicals have deliberately engineered a “hate storm,” and it’s without coincidence that a wave of attacks were carried out against Christians days after Hindutva hate preachers at the Dharma Sansad (Hindu convention) in mid-December vowed to “kill and die” for a Hindu nation, and “be ready to kill and go to jail,” while others urged Indian security forces to mimic the Myanmar military’s crackdown against Rohingya Muslims.

The final month of 2021 saw a spike in violence against Christians and their places of worship, including attacks on churches in Karnataka, a Christian school in Madhya Pradesh, a Jesus statue in Haryana and the disruption of Christian celebrations in Assam and Uttar Pradesh, with Christmas Day witnessing more than a half-dozen hate crime incidents alone.

A total of 486 incidents of violence against Christians in India were recorded in 2021, representing a 75 percent increase on the previous year, with 104 of these attacks occurring in the final two months of the year, according to the United Christian Forum, which called 2021 the “most violent year for Christians in India since 2014.”

While Persecution Relief, a non-profit that tracks violence against Christians, has documented a steady rise in attacks against the religious minority since Modi came to power, climbing 60 percent from 2016 to 2019.

The upward spike during the past year has come largely on the back of Hindu nationalist groups falsely accusing Christians of using Christmas celebrations as a front to lure Hindus into the Christian faith, and then forcibly convert them. The regional general secretary of Hindutva outfit Bajrang Dal in Uttar Pradesh told members, “They [Christians] lure [Hindu] children by making Santa Claus distribute gifts to them and attract them towards Christianity.”

Tejasvi Surya, a BJP member of parliament and card carrying member of Rashtriya Swayamsevak Sangh (RSS), stated demands for Christians to be “brought back” into the Hindu fold, perpetuating the myth India’s religious minorities were duped or forcibly pulled away from the Hindu faith, which signals the government’s support to those who commit violence against Christians and Muslims under the pretence of forced conversions.

In fact, India’s ruling party – Bharatiya Janata Party (BJP) – says its working on a “strong law” to combat religious conversion in several states, including Karnataka and Uttar Pradesh, while promising prison sentences of up to 10 years for those found guilty of converting others by “force” or “fraudulent methods,” despite there been zero evidence Hindus are being lured or forced against their will into Christianity or Islam, which is why critics have described these proposed laws as the “Nazification of India’s laws.”

Christian leaders fear these bills will further embolden Hindu nationalist groups and individuals to further target the community, with Peter Machado, Archbishop of Bangalore, telling BBC Hindi, “Once the bill is passed, we will have to wait for more persecution and more difficulties.”

These proposed anti-conversion bills draw their inspiration from the passing of a so-called “anti-Love Jihad” law in BJP-ruled Uttar Pradesh last year, after an online conspiracy alleged Muslim men are tricking Hindu women into marriage with the aim of converting them to Islam. The state’s Chief Minister Yogi Adityanath threatening death to those who lure Hindu women, saying “I warn those who conceal identity and play with our sisters’ respect. If you don’t mend your ways your ‘Ram naam satya’ (a chant associated with Hindu funerals) journey will begin.”

Notably, the Modi government has not only refused to condemn calls for genocide and violent attacks against religious minorities, but also has signalled its support for anti-Christian attitudes in recently blocking Missions for Charity, a Catholic-based charity associated with human rights icon and Nobel laureate recipient Mother Teresa, from receiving international dominations in response to allegations it is forcibly converting Hindus to Catholicism, therefore cutting off a major source of funding for desperately impoverished and disabled Indians.

But nobody should be surprised by this unjustified and callous cruelty, given there’s zero daylight between Modi’s BJP and Hindu nationalist organizations, as noted by a former RSS member who said exactly that, proclaiming, “There is no difference between the BJP and RSS. BJP is the body. RSS is the soul, and the Bajrang Dal is the hands for beating.”

This escalating attacks against Christians by Hindu nationalist supporters in the streets and accompanying support by BJP in the country’s legislatures are taking place inside an ecosystem of hate and a culture of impunity. In the minds of Hindu nationalists, the logic becomes self-evident – if authorities have done nothing to halt anti-Muslim violence, then why not also target Christians?

The objective is clear, according to political scientist Zoya Hasan, who says isolating and demonizing minorities is part of the “plan” to consolidate Hindu supremacism and establish a Hindu state. “It is well thought out and purposeful,” he says.

More concerning still is the way in which the country’s institutions, particularly the police and courts, have been corrupted by Hindu nationalist sensibilities, which is why human rights groups have witnessed an institutional siding with Hindu perpetrators over non- Hindu victims of violence, leaving religious minorities nowhere to turn.

In other words, violent Hindu extremists have been given a “free run” to attack religious minorities whenever and wherever they find them, which is why experts are warning Christians and Muslims find themselves on the brink of genocide in Modi’s India.

Also Read
Liberation Theology and Politics: From Latin America to the Middle East