Turkey Is an Afro-Eurasian State

President Erdogan's Africa vision: Turkey is as an "Afro-Eurasian state" and a fairer and strategic alternative ally for African nations. 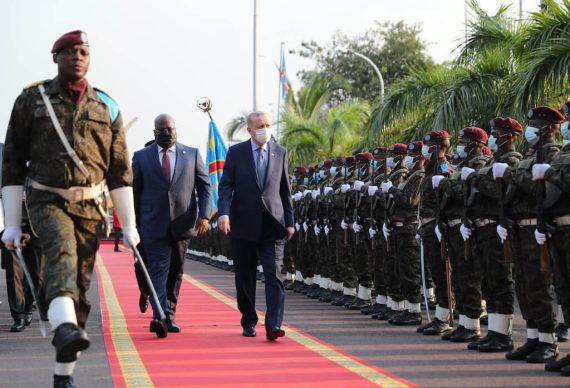 Turkey is seeking to counter the Western and neo-colonial influence in the African continent by its increasing economic as well as political presence in the continent. The latest visit by President Erdoğan to strategic countries in Central and West Africa has cemented this vision set by Ankara. Erdogan’s commitment in strengthening the ties between Turkey and Africa is demonstrated since 2004 in the 50 plus trips to the continent and the 30 visits he made to African states.

In his four-day visit to Central and West Africa, Turkish president Recep Tayyip Erdoğan aimed to boost economic as well as political relations with strategic African countries, following the roadmap designed in the Turkish relations with Africa for 2022 to 2026. Last October, Erdoğan’s four-day diplomatic tour included Angola, Nigeria, and Togo. Also, in October 2021, Istanbul hosted ministers from African countries and business leaders in a summit which aimed particularly at boosting trade between Turkey and African nations.

In his African tour, Erdoğan has visited the Democratic Republic of the Congo, Guinea-Bissau and Senegal. Erdoğan’s visit to Guinea-Bissau was the first-ever presidential visit from Turkey to Guinea-Bissau. In Congo, a cooperation deal on the defense industry, a military framework agreement and a protocol on financial aid were signed between both sides.

Read: Turkey is the New Strategic Player in Africa

In Senegal, Erdoğan and his Senegalese counterpart President Macky Sall attended Turkiye-Senegal Business Forum in Dakar, where Erdoğan said that his target to increase the bilateral trade volume between the two countries from $400 till $1 billion. Erdoğan highlighted that despite the coronavirus pandemic, the trade volume in 2021 jumped 42% year-on-year to $540 million.

Erdoğan said his target is to increase the bilateral trade volume between Turkey and Senegal from $400 till $1 billion.

Since 2007, The Turkish Cooperation and Coordination Agency (TIKA), has completed around 190 projects in Senegal. In terms to the cultural relations between the two countries, the Turkish Maarif Foundation has provided education to almost 800 students in Senegal.

Because of its geographical location, Senegal is an export gateway to West African countries.

In his visit to Kinshasa, the capital of the DRC, the two countries have signed agreements to enhance cooperation in various fields, including a military framework agreement, a protocol on financial aid and a cooperation deal on the defense industry. Erdoğan who was accompanied by a delegation of Turkish businessmen and government officials.

President of Democratic Republic of Congo Felix Tshisekedi described the cooperation agreements with Turkey as “win-win” deals, adding that Congo has sought Turkish support in the fight against militia groups active in the east of the DRC.

The cooperation between Turkey and three countries has also include the agricultural sector, as agreements were signed such as cooperation agreement in the field of vegetables and fruit exports, as well as the export of peanut products and MoU on the supply of motor agricultural equipment. This is in addition to experience sharing on issues such as watershed management, wastewater treatment, desertification, drought, combating forest fires and pests.

During his visit, Erdoğan noted that: “On the basis of the win-win principle, cooperation channels set especially in the fields of production, agriculture, tourism, textile, industry, energy, food, and health will benefit the entire region.”

In response to the growing cooperation between Turkey and many African nations, France’s media outlets have recently described Turkey as a rising power in Africa.

Erdoğan’s tour came after Istanbul had hosted the Third Turkey-Africa Summit in December 2021, which aimed at deepening political, economic and military ties, and in which leaders of more than 35 African nations as well as influential political figures in Africa attended, which demonstrates the growing importance of Turkey for the continent. Among the attendees were the incoming chair of the African Union the Senegalese President Macky Sall and the chair of the Economic Community of West African States the Ghanaian President Nana Akufo-Addo. The presence of many high-level profiles can be viewed as a foreign-policy challenge for Western countries such as France and the UK.

In response to the growing cooperation between Turkey and many African nations, France’s media outlets have recently described Turkey as a rising power in Africa, admitting that the relationship between the two sides have a strategic dimension, especially in the last two decades, with Ankara’s developing defense technology and political power in the region.

Read: Ruling Families in African Politics: From Kenya, to Chad and Ghana

In the last 20 years, the number of Turkish embassies in Africa has risen from 12 to 43, with the aim is to increase it to 50, according to the Turkish vision and the country’s policy of “Strategic Africa,” launched by Erdoğan in 2003. As the European Union is the first trading partner and the first investor in Africa according to Ursula von der Leyen, president of the European Commission, the trade between Turkey and the African continent has increased to $25.3 billion in the past decade, after it commissioned the Africa Opening in 2005, and compared to only $5.4 billion in 2003.

Ankara has a commitment to increase this bilateral trade to more than $50bn in next coming years. Additionally, Turkish Airlines has become a key player in African countries, providing services to more than 60 destinations, while putting Istanbul a central destination for intercontinental travel.

Turkey has highlighted that Western countries have exploited the Africa continent for decades for their own imperialist interests. In that respect, in contrast to the American and European approaches, and the former as well as new Western imperialism in Africa, Turkey’s business and political approaches to the African countries have focused on development and cultural projects.

Elif Comoğlu Ulgen, the Turkish Ambassador to South Africa said that Turkey is in the continent with a win-win strategy and Africans see Turkey as a country not coming to the continent with any colonial baggage. On the other hand, since the fifties, the terms of engagement of the EU with African states was determined without consultation with Africans.

Addressing Angola’s parliament last October, Erdoğan stated that “As Turkey, we reject western-centred orientalist approaches to the African continent”. In his criticism to the UN Security Council framework and hierarchy, Erdoğan highlighted that 1.3 billion people live on the African continent however they are not represented at the Security Council.

As Turkey, which is described by Erdoğan as an “Afro-Eurasian state,” positions itself as a fairer and strategic alternative ally for African nations, its policy in the continent has become under the spotlight especially by the former imperialist states which could view its new position as a threat to their economic and political influence in the continent.

Mahmoud A. Ibrahim is a London-based journalist and news producer. A PhD researcher at the University of London - researching the decolonization of Islamophobia in the Western media. He holds an MBA from Newcastle University in Corporate Social Responsibility. He has worked for different media organizations including the BBC and consulted civil society organizations on pressing issues such as tacking racism in the media and countering Islamophobia. His areas of interest are decolonial thought, political communication and political analysis. He is a native Arabic speaker with some knowledge of Turkish.