Algeria has become Turkey’s second largest trading partner in Africa after Egypt, with exchanges that reached $4.2 billion in 2020. 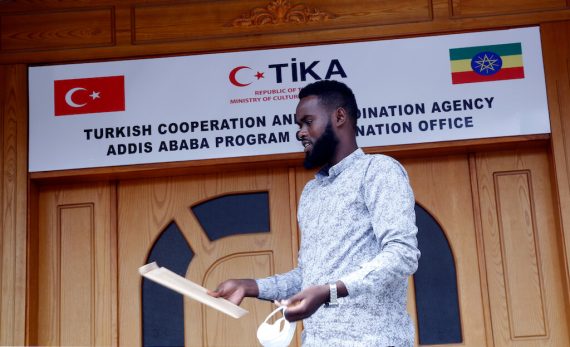 A group of young men and women Ethiopians were glued to examination papers at the quietened office of Turkey's state-run aid agency (TIKA), in the Ethiopian capital, Addis Ababa on July 14, 2021. Photo by Minasse Wondimu Hailu, Anadolu Images

A new and strategic actor in Africa, Turkey has intensified its military cooperation as well as political, economic and cultural ties with most of the African countries. Since labelling 2005 the “Year of Africa”, Turkey has built strong relations across Africa, this vision even goes back to 1998, when Turkey’s African Initiative Policy process started, and when Turkey became an observing member of the African Union in 2005 and 2008. Turkey’s African Initiative Policy has then developed in 2013 to become Africa Partnership Policy.

Political relations has developed between Turkey and Africa in the last two decades, as during Turkish President Recep Tayyip Erdoğan Erdoğan era 31 new embassies have opened and the total number of Turkish embassies in Africa has increased from 12 in 2002 to 43 in 2021, which will soon reach 44 embassies, with the opening of the Turkish embassy in Guinea-Bissau.

Ankara is now preparing for the third Turkey-Africa Partnership Summit, which will take place in Istanbul on 17th and 18th December 2021, a summit discussed by Turkish Foreign Minister Mevlüt Çavuşoğlu and Moussa Faki Mahamat, Chairperson of the Commission of the African Union, during his visit to Ankara in September, 2021.

When it comes to trade and investment, the Turkey-Africa Economic and Business Forum has facilitated to increase the economic ties between both parties. Turkey’s trade with African countries have reached $25.3 billion by 2020 from $5.4 billion in 2003 when Erdogan came to power.

In addition to trade, investment and cultural projects in Africa, security and military cooperation have cemented the relations between Turkey and many African influential countries.

According to the Turkish president, Ankara is determined to raise the bilateral trade figure with Africa to $50 billion. The Turkish Ministry of Foreign Affairs, stated that the volume of projects undertook by Turkish contracting companies in the African Continent has reached $71.1 billion and reached $19.5 billion in the Sub-Saharan African countries.

Turkey’s investment as well as cultural activities in Africa have become diverse, and implemented by top governmental bodies including Turkish Cooperation and Coordination Agency (TIKA), Yunus Emre Institute, the Turkish Maarif Foundation, Anadolu Agency, Turkish Airlines (THY) and the Disaster and Emergency Management Presidency (​​AFAD) and the Turkish Religious Foundation.

In addition to trade, investment and cultural projects in Africa, security and military cooperation have cemented the relations between Turkey and many African influential countries.

In 2017 Hulusi Akar, who was then the Turkish military Chief of Staff, and currently the Turkish Minister of Defence attended the opening of Turkey’s biggest overseas military base in Somalia’s capital, a $50 million base in Mogadishu, in order to reinforce Turkey’s strategic ties and presence in East Africa. According to Reuters, a senior Turkish official said that more than 10,000 Somali soldiers have been trained by Turkish officers at a Turkish military base.

In Nigeria, Turkey aims to further its trade and cooperation in the defense industry with the most populous country in Africa. The two countries are strengthening their relations through new deals in Turkey’s defense industry sector and its high-tech products.

From defense to business, Nigeria, Africa’s largest oil producer, is Turkey’s top trading partner in Sub-Saharan Africa, with a trading volume of $754 million in 2020, and expected to rise to more than $1 billion in 2021.

This strategic relationship between Turkey and West Africa dates back hundreds of years, during the Kanem-Bornu Empire and the Ottoman State, as emphasized by the Turkish envoy in Abuja Hidayet Bayraktar. This cooperation has existed in the West African region, which nowadays includes Nigeria, Niger, Chad, and Cameroon.

Read: How Djibouti Surrounded Itself by Military Bases

The military cooperation also has extended to Chad – during the visit of the transitional President Mahamat Idriss Deby to Ankara, last month, Erdogan stated that Turkey will develop cooperation with Chad in the military and security fields, beside the bilateral trade which has reached $112 million and expected to double in the near future. Chad is currently undertaking the periodical presidency of the G5 Sahel and the Community of Sahel–Saharan States.

Ethiopian Prime Minister Abiy Ahmed signed a military and financial cooperation deal with Ankara, during his visit in August this year to Turkey. Ambassador Dina Mufti, the Ethiopia ministry of foreign affairs spokesman, told Anadolu Agency that Ethiopia, Africa’s second-most populous country, would accept if Turkey played a role in mediating in the border dispute between Sudan and Ethiopia. Turkey is also a commercial player in Ethiopia, as $2.5bn has been invested in Ethiopia out of a total of $6bn already invested by Turkish companies in sub-Saharan Africa.

In Sudan, before the current political crisis, the bilateral trade volume between Turkey and Sudan was expected to reach $2 billion, as Sudan has become the sixth largest export Turkish partner in Africa

From Sudan to Niger, a cooperation agreement has been signed between Ankara and Niamey which allowed Ankara a military presence in the country in July 2020. Turkey has signed agreements on military cooperation, sports, and youth during Cavusoglu’s visit to Niger, and during his visit to Togo, agreements were signed concerning cooperation in defense.

In North Africa, Turkey has been involved in trade and defense in the region, providing support for the UN-backed administration in Libya. In its neighbor, Algeria has become Turkey’s second largest trading partner in Africa after Egypt, with exchanges that reached $4.2 billion in 2020, and with expectations that the two countries will expand trade to $5 billion in 2021, exceeding Egypt, thanks to the agreement Turkey has signed with Algeria, the “Friendship and Cooperation Agreement with Algeria”.

In a military deal between Morocco and the Turkish manufacturer Baykar, Ribat has received the first units of Turkey’s Bayraktar TB2 unmanned combat aerial vehicles (UCAVs). Additionally, the Royal Moroccan Armed Forces (FAR) attended a training program in Turkey in July according to media reports. The Turkish military technology and products will now compete with the French market in the North African, as Morocco has been long been using the French Heron drones.

The potential capabilities in many African countries in the sector of defense is likely to challenge the Western influence in the continent, especially with their interference in these countries, and as Turkey’s relations with Africa constitutes one of Turkey’s significant foreign policy objectives, this strategic partnership have recently made some Western and post-colonial states including France anxious and fear that Turkey’s presence might threaten their economic, military and geopolitical interests.

As Turkey seeks to be a new political player and economic partner in Africa and engage diplomatically and militarily, in the continent, France has started to feel that this might cause a threat to its interests in the region, according to experts. This tension has become obvious especially when Ankara has presented itself as an alternative actor in many African regions. Emmanuel Macron the French President has accused Turkey in November 2020 of weakening France’s West African ties by playing on what Macron’s called the “post-colonial resentment.”

Turkey’s entrance in the African arena which has been influenced by the old colonial powers might cause a political backlash from these powers, especially that Africa, for centuries, has been experiencing competition between Western European countries, and recently a rivalry between China and the U.S. The potential of Turkey in providing an alternative and third way to these powers can be a new challenge for Ankara as well as the African countries which are challenging their old alliances and seeking to decolonize their political and economic structures and coalitions. 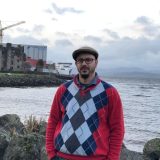 Mahmoud A. Ibrahim is a London-based journalist and news producer. A PhD researcher at the University of London - researching the decolonization of Islamophobia in the Western media. He holds an MBA from Newcastle University in Corporate Social Responsibility. He has worked for different media organizations including the BBC and consulted civil society organizations on pressing issues such as tacking racism in the media and countering Islamophobia. His areas of interest are decolonial thought, political communication and political analysis. He is a native Arabic speaker with some knowledge of Turkish.