The US miscalculation can potentially trigger more controversy among non-democracies in the Asia-Pacific. 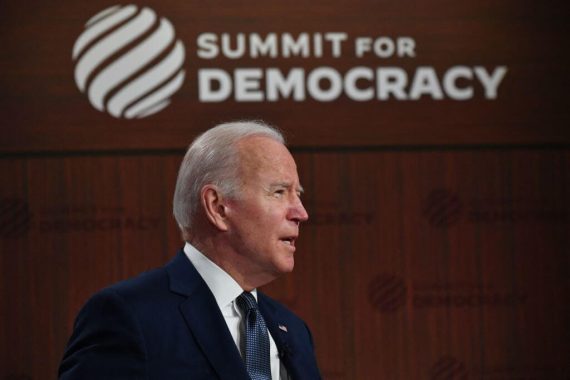 US President Joe Biden speaks to representatives of more than 100 countries during a virtual democracy summit at the White House in Washington DC on December 9, 2021. Photo by Nicholas Kamm, AFP via Getty Images

A virtual summit for democracy was held on December 9-10, 2021, upon the invitation of the United States. At the summit, Joe Biden renewed his call for democracy and the fight against authoritarianism and corruption. Amongst more than 110 invited countries, 89 showed up. The question now is why the Biden administration initiated the Summit for Democracy. Let me address some important issues and their consequences in what follows.

The general assertion is that the summit was initiated in order to respond to the rhetoric that American democracy is in decay and crisis – a debate which has gone global. One of the key denominators of the democracy crisis in the U.S. has been the horrific attack on Capitol Hill on January 6, 2021 following the results of the U.S. presidential elections.

On August 30, 2021, this was followed by the withdrawal of the U.S.-led NATO forces from Afghanistan, another evident U.S. failure. These and similar events brought the image of U.S. democracy into question before a global public. In this context, the Summit for Democracy was designed to rectify the image of the U.S. both domestically and globally.

The exclusion of major U.S. partners

China and Russia were not invited to the Summit for Democracy as they are regarded as the ideological rivals of democratically ruled countries. There were also countries from the Asia-Pacific and Africa that were not on the invitation list: Singapore, Thailand, and Vietnam, which are considered de facto allies of the United States, were among the ASEAN members not invited.

China and Russia were not invited to the Summit for Democracy for they are regarded as the ideological rivals of democratically ruled countries.

Although Singapore and Thailand might not be fully democratic, and Vietnam has a single-party rule, they uphold – to a certain degree – democratic practices such as civil society organizations and a rule-based administration. They also have closer ties with the U.S. in fields including not only economy but also culture, academia, and the defence sector. Not only this, but they have been approached by the U.S. to adopt policies against China. Indeed, this is closely related to the well-established Asian pivot policy by former U.S. president Barack Obama.

The invitation of only Malaysia, Indonesia, and the Philippines from the ASEAN region to the Summit for Democracy has led to speculations. Is there a rift between the rest of the member countries of ASEAN and the United States due to a widening ideological gap between democracies and non-democracies? Or is it because of these countries’ sociopolitical or socioeconomic alliances with U.S. rivals? If the former turns out to be true, there is definitely a certain degree of miscalculation by the Biden administration.

Considering that the Biden administration’s foreign policy is to reform and boost democratically ruled countries in Asia through manifold democratic engagements, the exclusion of certain ASEAN member countries from the summit seems not to be aligned with the mentioned policy.

Here it is necessary to highlight the designed meaning of the Summit for Democracy for the global community and the Asia-Pacific region, especially for ASEAN. China’s depiction as a non-democratic and autocratic country is nothing new to U.S. citizens, but a similar image couldn’t be generated among the Southeast Asian nations.

China’s depiction as a non-democratic and autocratic country is nothing new to U.S. citizens, but a similar image couldn’t be generated among the Southeast Asian nations.

It is true that ASEAN political leaders believe in the perfection of Western democracies. Moreover, they wish to make their own contributions to Western democratic ideals. This is related to the nation-state building process in the region whereby Western values have long served as a beacon of hope for molding public opinion.

Read: Another Sakoku? Japan’s Ongoing Stagnation Is Closing the Country

There is no doubt that the U.S. is losing credit as the leader of global democracy along with its capacity to defend democratic principles and values. Political elites in ASEAN member states, which rely on Western democracy as an ideal, can no longer satisfy or silence emergent anti-Western sentiments as now critical voices even within the ruling circles in Europe increasingly emerge and question the credibility of the U.S. “democratic” engagements abroad.

Concern over the Lack of Engagement

Japan is a highly acclaimed U.S. ally in the Asia-Pacific region and approached the U.S. decision not to invite certain ASEAN countries to the summit critically.

No doubt that the U.S. is losing credit as the leader of global democracy.

Japanese political commentators were in favor of inviting all ASEAN members, not only some, to the summit. According to them, direct U.S. engagement with ASEAN is essential to sustaining the security in the Asia-Pacific against China. The Japanese commentators seem right to criticize the imposition of a definition of democracy technically contrived by the U.S. alone.

On the subject of the exclusion of Singapore, Thailand, and Vietnam, Japan has implicitly reacted by expressing its concern about how to improve democratic rules in ASEAN without the U.S. facilitation and engagement through political, economic, and cultural mechanisms.

To highlight additional concerns, it should be emphasized that Singapore, a U.S. ally, and Vietnam, a potential partner of the United States, were not invited to the summit. Taking into consideration that Barack Obama was the first U.S. president to visit Hanoi after the Vietnam War, the exclusion of Vietnam from the summit is not an encouraging move for enhancing the partnership between the two capitals.

Categorizing certain Asia-Pacific countries as “non-democratic” may be true in principle. Nevertheless, the imposition of a Western-based democracy model may not be acceptable by a number of regional countries.

This miscalculated approach by the U.S. administration can potentially trigger more controversy among non-democracies in the Asia-Pacific, and may result either in an attempt to copy the model of the U.S. democracy, which could potentially end up in failure, or push them further towards strengthening their ties with China, the world’s second superpower.

The question remains whether the composition of the countries invited to the Summit for Democracy consisted of a wider alliance or the U.S. was simply playing the leadership role by marking its influence on democratically ruled countries. Then, the subsequent question is whether the U.S. administration intends to divide the world into democratic and undemocratic rules. If the latter is true, it is not difficult to guess the existence of a larger division and separation of countries by the United States as democratic and non-democratic ones.

The lack of U.S. engagement with Singapore, Thailand, and Vietnam, as member states of ASEAN, can deter the democratization processes further if the United States’ formal involvement remains ineffective. The influence of democratic principles has decreased significantly around the globe in the last decades. This includes Western countries, where democracy was born, as has become evident in the treatment of people of color and migrants.

The task of major democratic countries such as the U.S. is not to judge other democracies apathetically, but rather to galvanize democratic engagements with countries that are undergoing democratic challenges by paying a degree of respect to their existing democratic institutions.