A strong NATO solidarity and support behind Ukraine could save it from Russian threats. 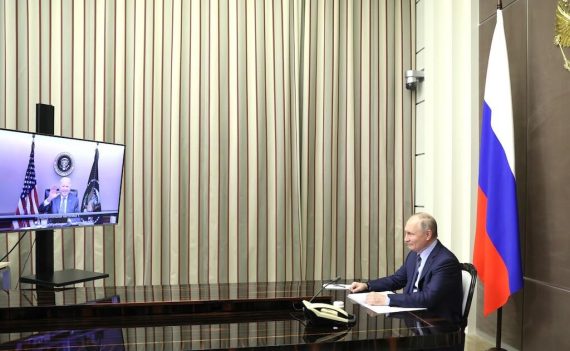 Russian President Vladimir Putin is seen during a meeting with U.S. President Joe Biden via video conference in Moscow, Russia on December 07, 2021. Photo by Kremlin Press Office via Anadolu Images

Thirty years ago, in December 1991, the leaders of Belarus, Russia, and Ukraine came together in a Belarusian hunting lodge, Belavezha, and signed the treaties that formally ended the Soviet Union. The three countries recognized each other’s sovereignty. By ushering in the end of the Soviet Union, the Belavezha Accords also brought an end to the Cold War.

Fast-forward to this day and Russia is keeping the Crimean Peninsula under control, supporting separatist statelets in Eastern Ukraine, and most recently threatened Ukraine with a military concentration at the Ukraine-Russia border. What is more, Russia is inviting the U.S. to revisit the international order that came into being following the Cold War over the issue of Ukraine by coercing the U.S. to promise that NATO will not expand further. Most recently, on December 17, Russia formally expressed its demands from NATO and the U.S. separately. And on December 30, Putin and Biden had a phone conversation about Russia’s demands. It seems to be that Putin is adamant on his demands while Biden is looking to deescalate the tensions without meeting Russia’s requests.

So, what is Russia’s endgame in Ukraine? And what might be the consequences of Russia’s words and actions? I already argued that Russia is not particularly after a military invasion of Ukraine despite moving troops to the border. Such an operation will incur high costs for Russia’s security and economy and will be counterproductive to Russia’s strategic goals. It is more reasonable to think that Russia wants to show that if its demands are not met, all options are on the table. Thus, the question is what Russia will do if, or when, its demands are not met.

Before moving on to the likely scenarios for the near future, let us look at Russia’s demands. Russia declared that the growing strategic presence of the West in Ukraine, and particularly in Eastern Ukraine, is unacceptable, and that it is prepared to do whatever it takes to secure its self-defined security interests. With the U.S. increasingly concerned with China, Russia sees a window of opportunity to revisit the post-Cold War order. Though Russia’s ostensible concern is Ukraine and the ongoing developments within that country, it is asking for the rearrangement of the regional and global order. Both demands are by no means unheard of coming from Russia, but signaling a large-scale invasion and setting out demands through official channels took Russia’s communication with the West to a whole other level.

Russia regards Ukraine as part of its “near abroad” does not want to see any Western influence in the country.

The first part of the issue regards the status of Ukraine in today’s international order. Having classified Ukraine as part of its “near abroad,” Russia does not want to see any Western influence in the country, let alone Western arms and soldiers. Always vocal about its resentment of Western meddling in post-Soviet states, Russia has also taken direct action to assert itself on numerous occasions including in Georgia, Ukraine, and Syria.

Ukraine has become an important part of the dispute regarding the future of post-Soviet space between the West and Russia in a process that started with the Color Revolutions in the 2000s and continued with the conflict in Eastern Ukraine. Although Russia claims not to be a party to the conflict between the Ukrainian government and the separatists but instead a neutral arbiter, it has been exceptionally vocal about the issue from the beginning of the conflict in 2015. Russian officials have argued that Ukraine does not comply with the Minsk Accords, which requires a ceasefire and decentralization.

The Minsk Accords, however, are open to interpretation as the Russian side utilizes them to compel Ukraine to share its sovereignty with the statelets in Eastern Ukraine, namely the Donetsk and Luhansk People’s Republics, while Ukraine wants to restore order and preserve its territorial integrity. More recently, the U.S. has provided weapons and training to the Ukrainian army within the framework of Operation Fearless Guardian. Meanwhile, Russia is very disturbed by the expanding cooperation between the U.S. and Ukrainian armies.

More importantly, Russia has used the conflict to settle its disagreements both with Ukraine and the U.S. Under Putin, Russia has not shied away from voicing its concerns about the predominant role of the United States in global affairs. Russia underlines that a unipolar world is not acceptable and that the U.S. must comply with a multipolar global world order where the interests of Russia, as one of the great powers, are respected.

Russia has made it clear that Ukraine is one detail – albeit not small – in its foreign policy vision. In its communication with its Western counterparts, Russia proposed a grand bargain over the spheres of influence in Eastern Europe. Going a little bit further, Russia promulgated an official list of demands on the website of the Russian Ministry of Foreign Affairs. Russia demanded that NATO not deploy any more forces or land-based intermediate and short-range missiles in areas that allow them to reach the territory of Russia, and to refrain from enlargement.

NATO’s approval of these demands would require the green light of all 30 members of the North Atlantic Alliance. Moreover, the acceptance of these demands will mean a step back from NATO’s open-door policy. Therefore, it is unlikely that Russia’s demands as they currently stand will be taken into serious consideration. Not forgetting the U.S., Russia promulgated another list where it calls on the U.S. not to implement security measures that could threaten Russia and to guarantee the prevention of further NATO enlargement. Given the blurry nature of Russia’s security and the practical inability of the U.S. to dictate NATO’s decisions, these demands are also likely to remain unmet.

To predict the consequences of Russia’s actions, we need to consider the context within which Russia’s words and actions take place. So far, Russia has shown that it means business by amassing as many as 175,000 troops on the border with Ukraine, which are enough to maintain a large-scale offensive in a foreign land. The U.S. is preoccupied with China and has set its mind on avoiding unnecessary military conflicts. Russia is fully aware of these dynamics. Biden already ruled out a military response to Russia, and his threat of economic sanctions will not stop Russia – the same way they failed to do in Crimea. Though a full-scale military operation still seems unlikely, Russia will go as far as to show its willingness to go down that road in order to get assurances from the West regarding its military engagements in Eastern Europe.

It is safe to assume that tensions will rise between the U.S. and Russia, but the level of these tensions hinges upon the extent the U.S. will be able to counter Russia skillfully. The U.S. has several tools it can use to respond to Russia. So far, it has used diplomacy to deescalate the tensions. The threats of economic sanctions are also on the table. Since the annexation of Crimea, however, Russia has gained a certain level of immunity to economic sanctions, and it is debatable whether the U.S. could hurt Russia with hard economic sanctions without hurting itself as well.