The European Union is getting closer to a common security understanding. 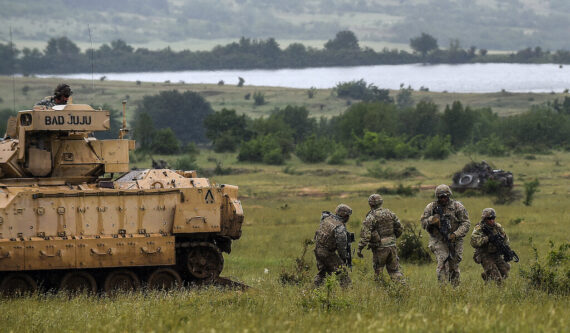 The step was taken after the EU declared that it would increase its defense expenditure. This move raised questions about whether the EU states are now more willing to form a European military identity given Russia’s invasion of Ukraine. What then does the EU’s decision to raise its defense budget mean?

The idea of creating a European army has a long and contentious history in Europe, dating back to the 1950s when it was conceived as a mechanism to boost the defense against the Communist threat without straightforwardly rearming Germany after World War II.

Along with political and economic integration policies, EU member states worked to develop a joint defense understanding to address the security challenges Europe may face. One significant attempt along this line was the Western European Union (WEU), which was founded in 1954 and dissolved in 2011. The reason behind the dissolution was that the WEU did not provide security to all EU members and was limited to only 10 states, namely Belgium, France, Germany, Greece, Italy, Luxembourg, Netherlands, Portugal, Spain, and the United Kingdom.

In 2004, following the lessons learned from Kosovo, the European Defence Agency was founded, and over time special EU military bodies were established. In addition, the Treaty of Lisbon (2007) provides a common EU defense strategy. Notwithstanding, the treaty still specified the significance of a national defense strategy, including NATO membership and/or neutrality.

Read: The New Politics of Alliance: Allies, Proxies, and Adversaries Have Become Hard to Tell Apart

The Berlin Plus agreement signed between NATO and the EU on March 17, 2003, allows the union to use NATO facilities and capabilities. A good example is Operation ALTHEA, formally known as EUFOR (European Union Force Bosnia and Herzegovina), a military deployment succeeding NATO’s former SFOR (Stabilization Force in Bosnia and Herzegovina) and IFOR (Implementation Force), and established as multinational peacekeeping forces to carry out and implement the Dayton Peace Accords.

In recent years, the European Union started paying more attention to security and defense cooperation. The year 2017 witnessed the establishment of the following defense organizations: the Permanent Structured Cooperation (PESCO), which, as of June 2019, has 25 participating EU countries; the Military Planning and Conduct Capability (MPCC); the Coordinated Annual Review on Defence (CARD); and the European Defence Fund (EDF).

Moreover, the European Parliament took steps toward a resolution in December 2018 on a plan to facilitate military mobility within and across the EU. This step is significant for enhancing the response time of military personnel and access to equipment in response to crises.

With the Strategic Compass published in March 2022, the EU announced that it aims for a stronger and more capable EU in security and defense. The Strategic Compass aims to give the “European Union an ambitious plan of action for strengthening the EU’s security and defense policy by 2030.” The Compass states the EU’s intention to respond quickly to crises by establishing a force of 5,000 troops with a rapid deployment capacity.

Highlighting the complementary function to NATO, Strategic Compass emphasizes a “stronger and more capable EU,” while NATO remains the foundation of collective defense for global and transatlantic matters for the EU member states.

How Far Does the EU Need NATO?

Some EU countries such as France, Germany, and Italy prioritize the EU’s own defense and promote the idea of an EU army. French President Emmanuel Macron has been a strong proponent of this idea; back in 2019, he had directed harsh criticism against NATO claiming that it was “brain-dead.” But the Russian military invasion of Ukraine fortified NATO’s international position, leading EU member states to rethink their security and defense.

Today, there is considerable support among other EU member states for the EU maintaining its own security. Italy’s Prime Minister Mario Draghi argued for the need to enhance European security. At the end-of-year news conference in Rome in December 2021, Draghi told reporters,  “Do we have missiles, ships, cannons, armies? At the moment, no.” Draghi highlighted that NATO’s real focus is not the Russian threat, but China and the Indo-Pacific region.

Tensions between the U.S. and some EU countries, too, fuel debates on Europe becoming a self-sufficient and self-reliant power. In NATO-EU security relations, the distrust felt by some EU member states—especially evident during the Trump administration—has a potential to resurge in the future. Ursula von der Leyen, president of the EU Commission, said in a statement in 2021 that the EU should seek to beef up its military capabilities to confront security threats and global crises.

There is also a counter-approach among some EU member states on the issue of a European army. The Baltic states (Estonia, Latvia, and Lithuania) and Poland believe that NATO can be more effective against the Russian threat with Poland and Latvia being at the forefront of this opinion.

Finland and Sweden have long remained neutral in international politics, but recently changed their opinions on joining NATO, proving once again the importance of the North Atlantic Alliance. Furthermore, countries such as Belgium, Sweden, and Germany started to increase their military spending in order to reach the 2% defense investment NATO guideline—something the U.S. has been complaining about for years. It is remarkable that Germany, which kept its defense budget the same for years, has finally increased it to €100 billion.

On July 18, NATO Secretary General Jens Stoltenberg stated, “Remember one thing, yes, we pay a price, but the price we pay, as the European Union, as NATO, is a price we can measure in currency, in money. The price they pay is measured in lives lost every day. So, we should just stop complaining and step up and provide support, full stop.”

On the same day, the EU Commission announced that the EU is to reinforce the European defense industry through common procurement with a €500 million instrument. The European Parliament and European Council’s proposal for a regulation establishing the “European Defence Industry Reinforcement through Common Procurement Act (EDIRPA)” for 2022–2024 has been approved by the EU Commission. According to Executive Vice-President of the European Commission Margrethe Vestager, the EDIRPA proposal “is a historical milestone in establishing the EU Defence Union, enhancing the security of EU citizens, and strengthening the EU as a partner for our allies.”

The idea of a European army has faced many challenges to date; to name but a few, dependence on the U.S. arms sector, diverse threat perceptions of EU member states, inconveniency of the joint decision-making processes, and infrastructural inadequacies. However, though still small in size, the EU is getting closer to a common security understanding. It will be curious to follow whether the European Union will achieve a strong security and defense of its own.