Orbán presented his followers with a choice of either a "pro-peace right" or a "pro-war left." 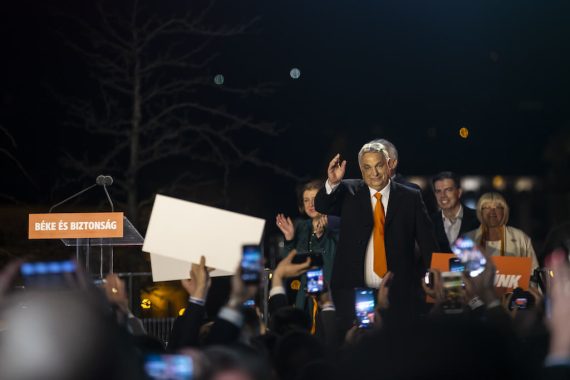 Hungarian Prime Minister Viktor Orban celebrates on stage with members of the Fidesz party at their election base, 'Balna' building on the bank of the Danube River of Budapest, Hungary on April 03, 2022. Photo by Arpad Kurucz, Anadolu Images

In the final days leading to the elections, the war in Ukraine reflected heavily on campaign narratives, increasing voter turnout to 69.54% and advantaging Orbán who largely dominates Hungarian media. The opposition maintains that the elections were not on fair grounds with checks and balances issues and gerrymandering.

Following his 53% win, Orbán mocked Ukrainian leader Volodymyr Zelensky as an opponent to overpower through his campaign, and sent a message to the EU saying that conservative civic and patriotic politics was the future. He was able to maintain a two-thirds majority in the parliament, which the opposition claims

Orbán used to his advantage in his prior terms. However, a referendum in which Orbán advocated in favor of banning educational material for minors claiming that it promotes homosexuality and sex reassignment was deemed invalid.

The war in Ukraine and the election in Hungary

On March 15, during rallies commemorating the Hungarian Revolution of 1848, an important event shaping the formation of the Hungarian national identity, the war in Ukraine shaped the electoral campaigns’ narratives. Orbán presented his followers with a choice of a “pro-peace right” or “pro-war left.” Similarly, Márki-Zay remarked a “single historic choice: to choose Europe over the East, freedom over tyranny.”

While Orbán’s idea of taking a pro-peace approach is keeping Hungary neutral and out of the war, his party accused his opponent of wanting to send Hungarian soldiers to fight in Ukraine. Márki-Zay stated that these were “slanderous claims.”

Márki-Zay criticized Orbán for serving Putin’s interests, and argued that Hungarians thought it was Putin and not Brussels that needed to be stopped for peace to prevail. The opposition ran with a promise for a new constitution to restore the rule of law that it claims Orbán has marred, alongside accusing Orbán of promoting a hate campaign towards minorities and certain persons, namely George Soros. The opposition mainly stood for a pluralistic political system and the repairing of alliances with the EU and NATO.

Divergence with the West

Since Orbán reclaimed power in 2010, the EU has accused Hungary of democratic backsliding varying from undermining press freedom and the education system to eroding judicial independence, which are among the opposition’s campaign talking points. The two sides have disputes over values, migration, and LGBTQ rights, which have dominated Orbán’s election campaign prior to the war in Ukraine.

What stands out is Orbán’s “illiberal democracy,” which rejects that democracy should be in the form of western liberalism and causes divergence with the EU. Orbán has often tried to establish the EU’s criticism as an attempt to erode Hungary’s sovereignty, and once stated at a party congress, “After communist bureaucracy … we don’t want new dictates this time from Brussels.”

In contrast to the EU’s united position, Hungary is hesitant to alienate Russia. It has allowed the deployment of NATO troops on its border and did not veto EU sanctions against Russia; however, it has blocked weapons transfer to Ukraine from its territory and refused to take part in sanctions that affect its energy reliance on Russia, citing that Hungarian households should not pay the price of the war.

Opening to the East

During Orbán’s 12 years in power, Hungary has cultivated an amicable relationship with Russia alongside dissent from the EU. Their relations started flourishing in 2011, when Hungary introduced an “Eastern Opening” policy to trade with countries like Russia, China, and Turkey to counterbalance economic ties with the West.

Three years later, Hungary gave a construction project to Russia for expanding Hungary’s only nuclear plant with Russian financing, which has caused much speculation within the EU. Hungary has confirmed it will move forward with the project after calls from the opposition to scrap it in the wake of the Ukraine war.

Furthermore, during the Russian annexation of Crimea, Hungary was hesitant to sanction Russia. In November 2021, the Hungarian foreign minister was awarded the highest state honor for non-Russians, the “Friend of Russia” award.

Orbán’s reasoning can be summarized in an interview on March 3, where he stated Hungary was caught up between major geopolitical powers and that it was NATO expansions that triggered the war by not appealing to Russian security demands.

He described Russia-Hungary relations as balanced and fair, hailed China’s strong economic endurance post-2008, and articulated his interests in developing a beneficial relationship with China, which he acknowledged as an emerging world power in the shifting world order.

Orbán evaluated the current Anglo-Saxon order in a manner reminiscent of his issues with the EU, saying, “Anglo-Saxons want the world to recognize their position as morally right. For them, it’s not enough to accept the reality of power; they also need you to accept the things that they think are right. The Chinese have no such need.”

Hungarian voters and the Ukraine crisis

A recent Pulzus Research survey shows the differences in how voters of different parties perceive the war. It found that 25% of Fidesz-KDNP supporters said that Russia had launched a “justified war” to protect the Russian minority in Ukraine.

The major difference in perception may be due to the government’s pro-Russia stance over the years in addition to some pro-government media rhetoric. Although most major pro-government outlets have displayed neutral reporting on the war, pro-Russia narratives were put forward by some experts.

Márton Schlanger, a researcher at Republikon Institute, prior to the elections, stated, “Research suggests that the preferences of core voters have not been directly affected by the war. At most, it deepened their commitment to their party of choice, and this is true for both sides. The war may have had the greatest impact on undecided and passive voters. It is possible that the increased stakes will lure some passive voters to the polls.”

He added that there were between 5 and 10% of voters who his institute suspected would go to the polls and that the undecided voters would determine the outcome.

The war’s reflection on the election polls indirectly advantaged Orbán. Schlanger, commenting on voter behavior, stated, “It is possible that people will seek stability and continuity in times of war, and therefore we could see an increase in the number of voters who don’t want a change of leadership.” He added that Orbán’s support may have increased due to his nationwide selfpromotion as Hungary’s defender against the war