Kazakhstan: Where Do Turkey and Turkic States Stand?

No doubt, the increase of Russian influence in Central Asia will have consequences on Turkey’s Central Asia policy. 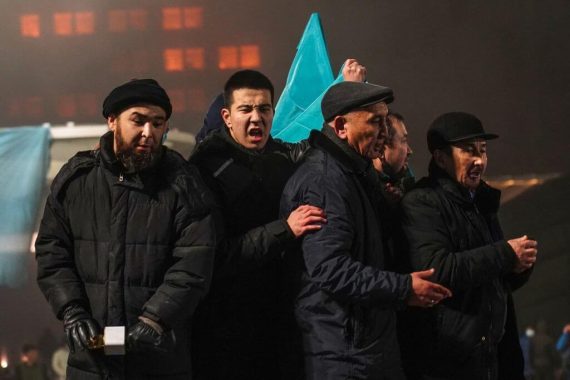 Protesters take part in a rally over a hike in energy prices in Almaty on January 5, 2022. Photo by Abduaziz Madyarov, AFP via Getty Images

Kassym-Jomart Tokayev, president of Kazakhstan, reacted promptly and dismissed the government, declared a curfew and a state of emergency immediately thereafter, and invited the Collective Security Treaty Organization (CSTO) troops to the country. When the protests subsided in a short time, the state of emergency ended and a schedule for the withdrawal of troops was declared.

The events in Kazakhstan were considered by some as a “surprise,” while others viewed them as “expected.” A fair and balanced interpretation of the events shows that there were tensions due to socio-economic factors and that the protests should have come as no surprise. Despite this, no one expected the demonstrations to turn into organized violence in such a short period of time.

In any case, events in Kazakhstan seem to have calmed down for now and stability has been restored. However, it is clear that these events will have local and regional implications, some of which are closely related to Turkey.

Factors affecting Turkey’s approach to the events in Kazakhstan

The events in Kazakhstan occurred in a limited time particularly as Kazakhstan is one of the country’s main partners in foreign policy and plays an important role in the Turkic world and Central Asia. This made it inevitable that Turkey be prompt but sensitive in its reaction towards the developments.

Three interrelated factors shaped Turkey’s reaction: the normative dimension, the bilateral relations dimension, and the regional context including the Turkic world and the Organization of Turkic States (OTS).

As for the normative dimension, Turkey has faced and overcome several anti-democratic challenges and interventions that threatened its political system, democracy, and stability. Only in the last decade, the Justice and Development Party governments faced the violent Gezi Park protests in 2013, the December 17-25, 2013 judicial coup attempt, and the July15, 2016 foiled coup attempt.

Coup attempts have increased Turkey’s sensitivity towards interventions in democratic processes. Consequently, Turkey has adopted a principle-based stance against any coup attempt or anti-democratic intervention. For instance, after the second Karabakh War which resulted in Azerbaijan’s victory, the Armenian military led by the chief of general staff published an ultimatum and called on Prime Minister Nikol Pashinyan to resign. Turkey condemned this attempt and declared its support for the elected government even though it had no diplomatic ties with the Pashinyan government.

Turkey and Kazakhstan have a stable and thriving model of relations established on both economic and diplomatic levels.

Therefore, when demonstrations started to broaden in Kazakhstan and there were signs of a loss of state authority in the country’s largest city, Turkey expressed its support for the Tokayev administration.

As for the bilateral relations dimension, Turkey and Kazakhstan have a stable and thriving model of relations established on both economic and diplomatic levels. On the economic level, trade volume between Turkey and Kazakhstan exceeds $3 billion annually with plans to reach $10 billion in the long term. Direct investments by Turkish companies, especially construction companies, can be seen in almost every city in Kazakhstan.

On the diplomatic level, Turkey was the first country to recognize the independence of Kazakhstan in 1991. More importantly, the relations between the two countries constitute a model for Central Asia as both countries are considered pioneers of cooperation and collaboration in the Turkic world.

Turkey’s reaction to the protests in Kazakhstan

Once the protests turned violent and riots became commonplace in Kazakhstan, Turkey initially tried to analyze the situation, and with the responsibility of the OTS chair, acted as both a friend and partner.

On the fourth day of the protests, January 6, 2022, President Erdoğan initiated telephone diplomacy and spoke with Tokayev and other heads of OTS states. In his call with Tokayev, Erdoğan stated that Turkey is closely following the developments and reiterated Turkey’s solidarity with Kazakhstan. In his other phone calls, too, the president expressed the importance of Kazakhstan’s stability.

On the same day, the OTS issued a statement on the events taking place in Kazakhstan. The statement did not make any distinction between the Kazakh people and government, and expressed OTS’s readiness to support the people and government of Kazakhstan if needed. Meanwhile, Turkish Minister of Foreign Affairs Mevlüt Çavuşoğlu had a phone call with his Kazakh counterpart Mukhtar Tileuberdi on January 7, and organized an Extraordinary Meeting of Foreign Ministers of the Organization of Turkic States on January 11 that reiterated the organization’s support for Kazakhstan.

Briefly, Turkey’s approach in the first three days of the protests was to evaluate the situation and possible future scenarios, and prepare for its response. Due to the sensitivity of events, Turkey didn’t make a distinction between the people (or protestors) and the government. Instead, Ankara preferred to embrace both the Kazakh people and the government, and expressed its strong support for the country’s stability. This stance was observed in the subsequent statements of both Turkey and the OTS.

Risks and opportunities in the new era

The developments in Kazakhstan show how protests can turn into organized violence, becoming a major challenge even in a relatively stable country like Kazakhstan. Therefore, it’s inevitable that Kazakhstan and other Central Asian states will derive lessons from this turn of events.

The new era in Kazakhstan and Central Asia contains risks as well as opportunities for Turkey. The opportunities derive from the domestic politics of the Central Asian states and regional geopolitics. For instance, recent events in Kazakhstan revealed how fragile states are when the political processes and stability are not supported by economic and welfare policies. Likewise, the events reveal how the power struggle among the political elites or within the bureaucracy, particularly within the security sector, can be a major threat for the stability of the state.

There are also regional repercussions of these events. Russia has showed it is an effective and “preferred” actor in the region whether through the CSTO or its bilateral engagements. Without a doubt, the increase of Russian influence in Central Asia will have consequences on Turkey’s bilateral relations with regional actors and cooperation in the OTS.

The new era in Kazakhstan and Central Asia contains risks as well as opportunities for Turkey.

On the other hand, Turkey has the opportunity to develop a new approach in Central Asia through bilateral relations with the Turkic states, especially Kazakhstan, and the OTS. For instance, Turkey is in the position to offer more cooperation for training or restructuring internal security organizations as well as increasing intelligence and military cooperation. Since Turkey has experienced serious challenges before, the country can share its experiences with other Turkic states.

From the OTS perspective, member states should learn a lesson from the immediate call and response of the Russian-led CSTO. As a medium-term goal, therefore, the OTS can form an initiative to develop military cooperation among its member states that can be used as a peacekeeping force or an observation mission in the future. Such an attempt would be the basis for a possible collective military cooperation that could be functional during regional crises or in UN-led non-combat missions. 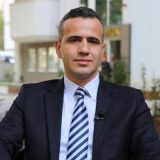 Ferhat Pirincci is professor of International Relations at Bursa Uludag University and a senior researcher at the Security Studies Department at SETA. His fields of research include Turkish foreign policy, Middle East Politics, arms trade, and the US foreign policy.