Now that Hamdok exited the Sudanese political scene, what is the fate of Sudan’s transition to democracy? 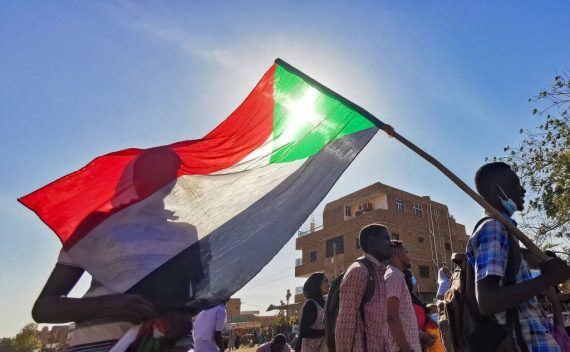 A Sudanese man carries a national flag during a protest against the October 2021 military coup, in the capital Khartoum, on January 9, 2022. Photo by AFP via Getty Images

On January 2, 2022, Sudan’s Prime Minister Abdalla Hamdok announced his resignation amid deadly crackdowns on on pro-democracy civilian demonstrations and a political deadlock that has compounded Sudan’s political stability and economic prosperity. The resignation of Abdalla Hamdok and his exit from the Sudanese political arena was anticipated; it was a matter of when not how.

On October 25, 2021, the Sudanese military had staged a coup and put then prime minister Hamdok under house arrest when political differences reached near-uncompromising positions while venomous accusations were traded. In a turn of events, Premier Hamdok struck a deal with the military and was reinstated to his position as prime minister in the transition government.

Now that Hamdok exited the Sudanese political scene, what is the fate of Sudan’s transition to democracy? What will the nature of Sudan’s anticipated democratic future be?

Sudan: A nation in constant transition

The current democratic transition in Sudan is not the first in the country’s history, and neither is the ruling military Sovereignty Council the first one overseeing a political transition. As a nation, Sudan leaps from one political transition to another while punctuated with military dictatorships. This has been the case since the nation’s independence.

Indeed, Sudan’s first transition was even before it gained independence from the British in 1952. Sudan’s first political transition was between 1953 and 1955: this was the era of the self-rule transition that was overseen by a governor general as head of state with an existing elected parliament, a cabinet, and a constitution. The next transition period was after the Revolution of October 1964 that brought down the government of Major General Ibrahim Abboud and replaced him with a ruling Sovereignty Council.

As a nation, Sudan leaps from one political transition to another while punctuated with military dictatorships.

Read: All-Out-War between Ethiopia and Sudan on the Doorstep?

The limits of the Forces of Freedom and Change (FFC)

The current Sovereignty Council was instituted following the fall of long-time ruler Omar al-Bashir. After the military took over from al-Bashir, protests and uprisings continued in different parts of Sudan calling for a full transition to a civilian democratic rule. The military generals that deposed al-Bashir – after long protests and a dwindling economy coupled with rising food prices – compromised with a coalition of diverse and different political groups, the FFC, to form a Sovereignty Council that will rule the nation until a civilian democratic parliament and government are elected.

After long talks brokered by the African Union and with the help of Ethiopia’s Abiy Ahmed, a Sovereignty Council composed of the Military Council (MC) and different political groups under the umbrella of the Forces of Freedom and Change was formed to spearhead the transition to civilian democracy. However, the crucial clue is that the Sovereignty Council was dominated by the military establishment. The FFC, Prime Minister Hamdok, and his government were simply puppets controlled by al-Burhan who together with his generals wielded the real power and political will.

And as the term limit of the military was approaching – since they were supposed to hand over power to the civilian FFC as per the agreement of the Sovereignty Council formation – fractures and tensions started to surface in the council. The military wing of the council wasn’t ready to hand over power to the FFC as agreed. Confidence and trust started to diminish between Prime Minister Hamdok and General al-Burhan. In a veiled speech, the former accused the military generals of not being ready for a full civilian government, and al-Burhan accused the government of being ineffective amid the economic turmoil.

Read: Sudanese People Long For a New Dawn Where Their Voices are Heard

Moreover, political fractures – occasioned by military generals – appeared within the FFC. Different factions of the FFC seemed to have lost confidence in Premier Hamdok as the economic woes continued. Former rebel leaders, tribal political elites, and other political groups that felt marginalized within the FFC movement as well as Hamdok’s government outrightly challenged and criticized the premier. The FFC was crumbling from within. The military generals were subtly smiling. This was the right time to depose Hamdok and crumble democratic aspirations.

The basis of the dispute between the Military Council and the Forces of Freedom and Change lies on the lack of trust and the issue of accountability which have hampered the proper functioning of the transitional Sovereignty Council.

When in October of last year Premier Hamdok was removed from power, democratic protests continued. The military reinstated Hamdok to power but protests still continued to rage. Both the military and the FFC lost their credibility to transition Sudan to a civilian democracy.

The anxieties of the Military Council

The basis of the dispute between the Military Council and the Forces of Freedom and Change lies on the lack of trust and the issue of accountability which have hampered the proper functioning of the transitional Sovereignty Council. Who is responsible and accountable for the horrendous murders, mistreatments, violence, and sexual harassment of protestors in Sudan for the last three years? The Military Council, which dominates the Sovereignty Council membership and operations, is clearly aware that they will face justice – and even imprisonment – if they hand over power to the civilian Forces of Freedom and Change.

The Sudanese military and the paramilitary Rapid Support Forces (RSF), which are commanded by Mohamed Hamdan Dagalo, the current deputy head of the Sovereignty Council, have committed gross violations of human rights during the democratic protests. The FFC and other political groups calling for the investigation and ultimate accountability for these human rights misconducts have rendered the MC paranoid and fearful of any civilian democratic rule. Indeed, the Military Council has undermined its junior civilian partner in the Sovereignty Council. The Forces of Freedom and Change has been powerless throughout the transition period, and functioned to legitimize the Military Council and facilitate its recognition in international politics.

Sudan is a weak state. There are paramilitary forces, tribal militias, and rebel groups that operate within its sovereign territories.

Moreover, Sudan is a weak state. There are paramilitary forces, tribal militias, and rebel groups that operate within its sovereign territories. All the political actors are armed and powerful, and their interests should be accommodated in the transition period to democracy. The incessant democratic protests and the Forces of Freedom and Change’s call for accountability instilled fears and anxieties into the military elites and establishment. Furthermore, the military itself needs to appease some of these paramilitary groups and tribal militias as in the case of the brutal paramilitary group Rapid Support Forces. This complicates the power dynamics in Sudan. Consequently, the transition to democracy seems a distant reality.

Now that Premier Hamdok has left power and politics, the Military Council will seek a civilian politician to lead the next government – one that would respect the council’s interests and concerns. Protests are raging all over Sudan, and the military is reacting with force and brutality. Sudan’s transition to democracy has hit a wall, but the protestors on the streets are adamant and willing to climb over that wall at all costs.

There are two options for the protesters: it is either a civilian democratic rule or recurring dictatorships and sovereign councils in Sudan. The people – and the streets – have spoken. Will the generals listen? Will there be what one may call “social disjunction” where the Sudanese would wish to extricate from the awkward feelings that come from long years of excessive conservatism to an open country that will be consonant with democracy and dignity?

Abdou Diouf studied psychology at the International University of Africa (IUA) Khartoum, Sudan. He is currently a graduate student at Ibn Haldun University’s School of Islamic Studies. He is interested in Islamic political and spiritual movements in West Africa, indigenous languages, culture, and Sufism.