Ultimately, the Astana Process reflects the nature of politics today. 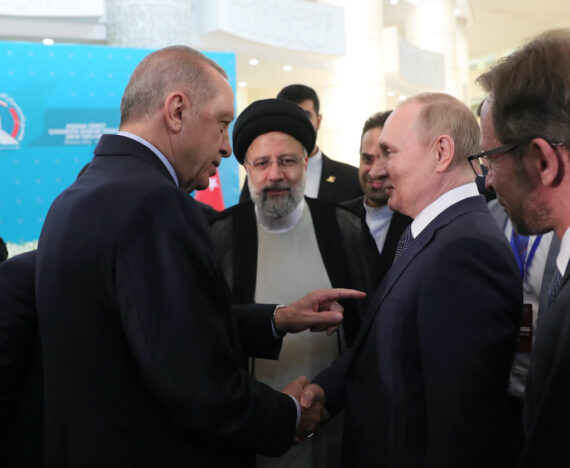 With the Syria War at the core, the Astana Process continues with occasional summits between Turkey, Russia, and Iran. The series of summits has been the only gateway to managing the crisis. The three countries finalized the seventh summit in Tehran on July 19, under the shade of each country’s concerns. The question to be discussed after the summit is whether the orientation of these summits is to build a mechanism, at the very least, to prevent further conflict or to gauge the ability to build a regional security complex in the Levant and beyond by promoting shared interests.

Turkey, Russia, and Iran established the Astana Process to preserve Syria’s sovereignty, unity, and territorial integrity through practical steps under their guarantees. Three significant milestones became the epicentre of the trilateral effort: (1) a peace process to continue the Geneva talks, (2) to ensure security in four de-escalation zones, and (3) to counter terrorism.

These objectives reflect the shared goals of the three countries, aiming at maximizing security for themselves. The U.S. presence in Syria with a quest to divide the country by empowering the PKK/ YPG terror group poses a common threat to Turkey, Russia, and Iran, even though their reasons and priorities diverge.

Read: The Tehran Summit: What Is Next for Turkey, Russia, and Iran?

Turkey’s essential threat perception was and still is the U.S.-backed terror corridor across the Turkish border. It is noteworthy that following the violent Gezi Park protests in May 2013, FETO’s judiciary plot against the government on December 17-25, 2013, and the failed July 15, 2016 coup attempt to topple the AK Party government again by FETO members, Turkey changed its engagement with Iran and Russia.

Russia aims to keep a military and political presence in warm waters, ambitiously following the footsteps of former Russian empires. Limiting the American presence to eastern Syria, Russia wants to determine the future of Syria by any means possible, be it diplomatic or military.

Iran is committed to building a Shia Crescent covering Iraq, Syria, and Lebanon under the pretext of countering Israel. Ideologically motivated, Iran seems territorially expansionist with a quest to justify the revolution’s cause. Meanwhile, Iran’s agenda is to be a regional power by exploiting the ethnically diverse Shia communities.

The major difference between the three countries is that Turkey attempts to preserve its security, while Iran and Russia are expansionist in their long-term agendas. Iran and Russia seemingly agree on Syria’s territorial integrity, but without discussing the content and addressing its sustainability.

Unconditionally backed by Russia and Iran, the Assad regime persistently tries to block the Geneva Talks, a parallel political process to that of Astana, whose main purpose has been to achieve peace based on the four baskets of the UN Resolution 2254. So far, there is no progress in drafting a constitution for a democratic Syria. Contrary to this, the Assad regime held “prearranged” elections for itself and Assad’s corrupted elite. Not unexpectedly, Bashar al-Assad was elected with more than 95% of the votes while 12 million displaced Syrians and refugees, representing almost half of the overall population, were not allowed to vote.

A constitution to end the conflict and build a democratic state, therefore, is not a winning idea with Assad. Russia and Iran, too, may lose their political ground if a free election were to be held, while the U.S. interests may be harmed since it has already invested in a terror network that pushed the majority of Syrian Kurds out of Syria. On the other hand, this terror network—the PKK/PYD/YPF/SDF—negotiated with Russia, Iran, and Assad to replace the Americans if needed. However, a free election would extinguish the U.S., Iran, and Russia’s proxy, namely the PKK and its Syrian offshoots.

The second objective, de-escalation zones, has been under continuous attacks from Russia, Iran, and the Assad regime. There remains only one de-escalation zone, which is Idlib with a population of more than four million. The other three de-escalation zones (Eastern Gouta, Northern Homs, and Deraa-Quneitra) are cleansed from Syrian civilians; the local public is pushed to the north either to Idlib or the areas under the control of the Syrian National Army (SNA).

Then, the Assad regime, Russia, and Iran challenged the geographical premises of the Astana format by capturing the three de-escalation zones and pushing the Syrian communities to immigrate, a move reminiscent of ethnic cleansing. Turkey’s military mobilization blocked the final penetration of the Iran-Russia-Assad trio from capturing the last de-escalations zone, Idlib, in 2020.

The final objective is about countering terrorism. Turkey’s concern is the PKK, and its offshoots in Syria, which is recognized as a terrorist organization by the EU and the U.S. Interestingly, Russia and Iran do not recognize the PKK and its offshoots as terrorist organizations. The PKK has an office in Moscow, while Iran has close links to the PKK in Iran, Iraq, and Syria despite Iran’s official denial. Interestingly, the U.S., Russia, and Iran compete over Syria, but they directly or indirectly relate their Syria policy with the PKK.

More interestingly, while the PKK terror group is de facto recognized by all these powers, the Turkey-backed Syrian National Army (SNA) is categorized as a terrorist organization by Russia and Iran. This means that there is no shared understanding of terrorism for the external actors involved in the Syria war. In a nutshell, the third leg of the Astana process is far removed from countering terrorism, except for DAESH.

Another dimension worth emphasizing is the competition between Russia and Iran. As Russia becomes more involved in Ukraine, Iran increases its assertiveness over Syria. The Assad regime is now more submissive to Iran as Russia has to lower its military profile in Syria. Shia militias loyal to Iran wait for a signal to challenge the status quo established by the Astana Process.

The initial step of spreading Iran’s influence in the Fertile Crescent was to build a firm sphere of influence in the south and east of Iraq that would also ensure the outreach of Iran’s support to the Assad regime and Shia militias in Syria. Iran’s ultimate goal, which is different than Russia’s, is to directly marginalize Turkey both in Iraq and Syria. The PKK then is a useful tool for Iran, it is enough to remember Hafez al-Assad’s support to the group in the 1980s and 1990s.

Despite the fact that Turkey, Russia, and Iran, have conflicting stakes in building a security complex in Syria, it is still the most effective ground to communicate and manage potential crises there. Yet, the Astana Process is far from reaching its ultimate goal as the parties could both cooperate and militarily confront each other. Turkey is more on the defence due to the domestically linked security threats, while Iran and Russia are on the offence and clearly expansionist.

The PKK and its offshoots in Syria function as proxies for Iran and the United States, and occasionally for Russia as well. In the following years, it is more likely for Iran and Russia to provoke and stall the peace process by backing the Assad regime, as resolving the conflict is not in their best interest. But negotiations will also not cease.

Ultimately, the Astana Process reflects the nature of politics today and is a repetitive pattern of engagement in conflicts: the actors can compete but also cooperate, confront but also compromise, fight militarily but also talk diplomatically in order to achieve their goals while lowering their costs and risks.