Moscow regards the legitimate Syrian opposition as a bigger threat than the YPG. 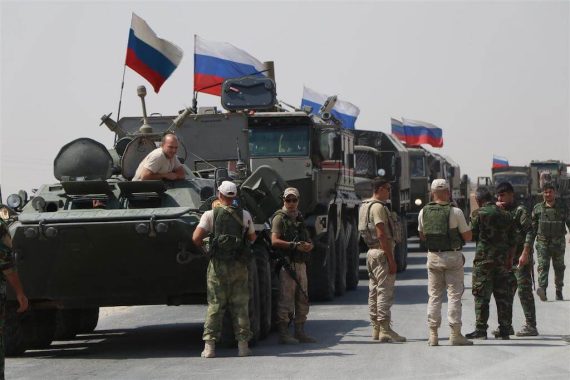 Russian military vehicles drive on the road as Russia makes a new military and logistic reinforcement of 30 vehicles to its military points in Kamisli occupied by YPG, Syrian branch of the PKK terrorist organization on September 14, 2020 Photo by Samer Uveyd, Anadolu Images

For years, the Turkish public criticized the U.S. administrations for their support of the YPG, the Syrian branch of the PKK terrorist organization, which poses a threat to Syria’s territorial integrity and a national security threat to Turkey. At the same time, Russia also tried to use the YPG as a card against Turkey in 2015 and early 2016, but later changed its position and declared its support for the territorial integrity of Syria, and acknowledged the threat the group poses against Turkey. However, in the end of 2019, Russia viewed the partial American withdrawal as an opportunity and re-changed its position again.

In this manner, in 2018, Russia withdrew from the Afrin region and opened the way for the joint Turkish-Syrian military operation of the Syrian National Army (SNA), the former Free Syrian Army (FSA), and the Turkish Armed Forces (TAF) against the YPG.

Moreover, Russia accepted to exclude YPG figures from the Syrian constitutional committee and signed several Astana resolutions which define the YPG as a threat to Syria’s territorial integrity. However, Russia changed its approach to the YPG following Turkey’s Operation Peace Spring and became – along with the U.S. – the new military protector of the YPG in Syria.

Read: The Only Way Out for Russia Is to Let Turkey Weaken the YPG

Why did Russia change its attitude towards the YPG? In order to understand this policy change, one should first analyze Russia’s overall Syria policy before Operation Peace Spring. No doubt, for Moscow, autonomy and federal governments or other forms of decentralized government are not a threat to the territorial integrity of a state since Russia itself is a federation. Nobody should expect Russia to oppose a federal system in Syria.

Therefore, Russia does not recognize the PKK and its Syrian branch, the YPG, as terror groups, and, in principle, does not oppose the YPG per se; however, Russia opposes the YPG’s current policies. For Moscow, the YPG’s partnership with the United States has been the main source of its distrust toward the organization. Moscow wants the YPG to quit working with the U.S. and cooperate with the Russia-backed Assad regime. Until Operation Peace Spring, all Russian charm efforts failed and the YPG remained loyal to the United States.

With Trump’s decision to withdraw from Syria, the YPG felt the urgent need to invite the Assad regime and Russia to provide military protection against Turkey and the Syrian Interim Government. The YPG’s request was seen by Moscow as a golden opportunity to gain extensive leverage. Russia wanted to fill the void and was further encouraged when U.S. CENTCOM officials decided to hand over their bases to the Russian military rather than seeing a further push by the Turkey-backed Syrian National Army.

Read: The YPG Myth Downplays a Danger For the West

With this momentum, Russia deployed its troops to Manbij, Ayn al-Arab (Kobane), Ayn Issa, Tal Tamr, Dirbasiyah, and Amudah along the front lines or the border region, and entered the towns of Tabqah and Raqqa. As Russia had troops in the YPG-held Tal Rifaat pocket since 2016, with this development, the YPG was on the verge of coming under full Russian military protection.

Moscow was expecting to enter the far east of Syria at the Iraqi border and the oil-rich region of Deir Ezzor in the southeast, but Trump’s decision to protect the oil hindered Russia from doing so. U.S. soldiers stayed in a strip in the east of the country and prevented Russia from entering. Since then, the YPG militants maintained a balancing act between Moscow and Washington as demonstrated by the visit of the PKK veteran and head of the political supreme body of the YPG, Elham Ahmad, to Moscow before heading to Washington.

Following the partial U.S. withdrawal and the new Russian protection of the YPG, Turkey signed two separate deals with the U.S. and Russia. The deal with the U.S. stopped the SNA-TAF advancement and canceled U.S. sanctions against Turkey in return.

The deal with Russia was more comprehensive. After Operation Peace Spring, the YPG invited the Assad regime and Russia to protect the front lines against a further push by the joint Turkish-Syrian forces, and Russia obligated itself under the terms of the deal to enforce a full withdrawal of all YPG forces from Tal Rifaat, Manbij, and an area extending 32 km from the Turkish border in the east of the Euphrates to the border with Iraq. The deal also foresaw joint Turkish-Russian patrols in a 10-kilometer-wide strip across the Turkish-Syrian border. Except for the joint patrols, Russia failed to deliver on any of the terms of the agreement.

Let alone keeping their promise, Russians have done the opposite and supported the YPG in its terror campaign against the Syrian Interim Government and Turkey. The YPG engaged in several attacks with various weapon systems against civilian-populated areas of the Syrian Interim Government such as Afrin, Azaz, Al-Bab, Jarablus, Tal Abyad, and Rasulayn.

The YPG used new models of Russian-supplied anti-tank guided missiles to target Turkish soldiers, infiltrated the front lines to kill SNA soldiers, and operated a network of cells in the areas of the Syrian Interim Government located in northern Syria. With these cells, the YPG could plant IEDs and attempt assassinations against the SNA, Syrian local politicians, and Turkish soldiers.

Read: The YPG Has a Bloody History in Syria, But the West Turns a Blind Eye

The YPG used the Russian-protected areas as a safe zone to conduct ranged artillery attacks against hospitals and civilian infrastructure. Yet, the most brutal of the YPG attacks were the constant car bomb attacks carried out in urban areas which randomly killed innocent civilians.

The YPG tries to maintain plausible deniability and rejects responsibility. However, car bombs intercepted at crossing points from YPG-held areas to the areas of the Syrian Interim Government, and the logic behind the attacks leave no doubt about who the perpetrators are. The YPG’s foreign backers, like the U.S., condemn the attacks without naming any suspect or culprit, or turn a blind eye to them entirely, like Russia.

For Moscow, the YPG’s systematic use of terror is a preferred tool to prevent the Syrian Interim Government from establishing a sustainable alternative to the Assad regime without getting into a confrontation with Turkey. The attacks are not conducted directly by Russia, but by the YPG, and the U.S. support and protection of the YPG shields Russia from Turkish criticism.  The Turkish public focuses on the U.S. support of the YPG rather than the military protection Russia provides the YPG and its pragmatic attitude to the YPG’s terror campaign.

In fact, Russian policy shows that Moscow regards the legitimate Syrian opposition as a bigger threat than the YPG. For Russia, the Syrian Interim Government is a direct alternative to the Assad regime, and the YPG represents only a territorially limited pursuit of autonomy. Therefore, Russia prefers to protect the YPG in order to disrupt the Syrian Interim Government rather than implementing its obligations stemming from the Turkish-Russian agreement of 2019.

In fairness, it should be underlined that the Russian position regarding the YPG’s demand to establish an autonomous region in northeast Syria has changed in line with the Astana accords. In the negotiations between the Assad regime and the YPG, Moscow puts its weight behind the regime’s categorical rejection of autonomy. In line with the Astana agreements, Russia rejects the separatist agenda of the YPG on paper. While the U.S. actively supports the political ambitions of the YPG in Syria, Russia supports the military presence of the YPG only as a temporary tool.