This deterioration also happened externally through the continued decline of the French role in Africa, the complete loss of its role to Russia in the Central African Republic and Mali, and the loss of its influence in Libya and Algeria to Turkey. 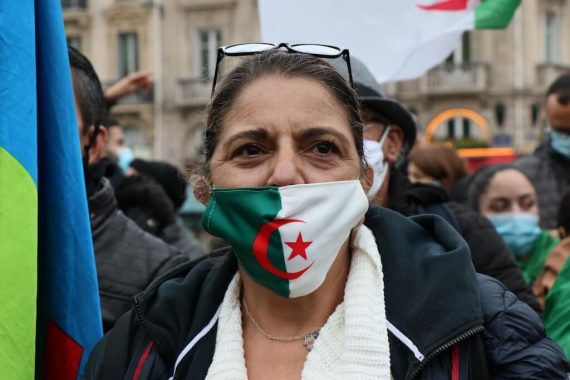 People attend a remembrance ceremony to mark the 59th anniversary of the 1961 Paris massacre, when as many as 400 demonstrators were killed and thrown into the Seine River for supporting the Algerian War of Independence, at the Pont Saint-Michel bridge over the River Seine in Paris, France on October 17, 2020. Photo by Alaattin Doğru. Anadolu Agency.

Emmanuel Macron’s statement on French colonial history and memory in Algeria and his sharp criticism of the Algerian regime sparked a political crisis between the two countries, which are linked with more than 130 years of colonial history. Macron’s statement is not new to the French political elite, which since Algeria’s independence in 1962 has been playing the colonial history card on every occasion for internal political consumption in France. Given the size of the Algerian community in France, Algeria has always occupied a significant place in the sociopolitical agenda.

More than four million Algerians are living in France and more than one million French Algerians are eligible to vote in French elections. During his visit to Algeria in 2007 on the eve of French elections, former French president Nicolas Sarkozy was the first French head of state to utter words of recognition and apology for the French colonial crimes.

However, later, he explicitly withdrew his statement during a presidential visit in December of the same year. What is new in President Macron’s statement is the criticism of the ruling elite in Algeria, his direct targeting of it, and the reference to the military structure of the regime despite the good relations that link these elites with France both publicly and behind the scenes.

This is the reason why Algerian authorities reacted strongly to Macron, especially when he referred to the slackness of the Algerian regime vis-à-vis the popular movement (the Hirak Movement) that erupted on February 22, 2019. Moreover, Macron questioned the existence before French colonialism of an Algerian nation in the first place. In a clear echo of the French orientalists of the nineteenth century, he ignored Algeria’s long history and its emergence as a state, the state of Numidia, a thousand years before the French state existed.

In fact, the French cultural and scientific machine worked hard to justify Algeria’s occupation and dissolving its political structure following its colonization in 1834, claiming it as French soil and its inhabitants as French Muslims. From then onward, France employed the Catholic Church’s religious machinery under the pretext of “civilizing” Algerians by educating them.

Behind Macron’s statement lies that fact that French presidential elections are approaching and according to opinion polls, far-right candidates such as Marine Le Pen, the head of the National Rally, and Éric Zemmour, independent far-right candidate of Algerian origin, have better chances in the elections.

Therefore, the move to reduce the number of visas granted to Algerians in September 2021 and Macron’s decision to apologize to the Algerian Harkis in the same month, come in this context. The French apology for the Harkis was preceded by honoring a number of them in September 2018, as well as the approval of the “Islamist separatism” bill by the French House of Representatives and Senate in August 2021.

All these decisions contradict the image built by Macron during his visit to Algeria as part of his electoral campaign in February 2017, in which he admitted that the French colonization of Algeria witnessed crimes against humanity and stressed his keenness to find a consensual formula that would meet Algerian expectations and hasten the signing of the friendship treaty between Algeria and France, which has been delayed for decades.

In addition, Macron made multiple positive statements about the strength of the relationship between the two, and in July 2020, in coordination with the Algerian presidency, formed a committee of historians. The committee was represented by Benjamin Stora on the French side, and Abdelmajid Chikhi, a historian, from the Algerian side, and given the responsibility to research the events of the Algerian Revolution (1954-1962) and the ways to overcome its future repercussions. 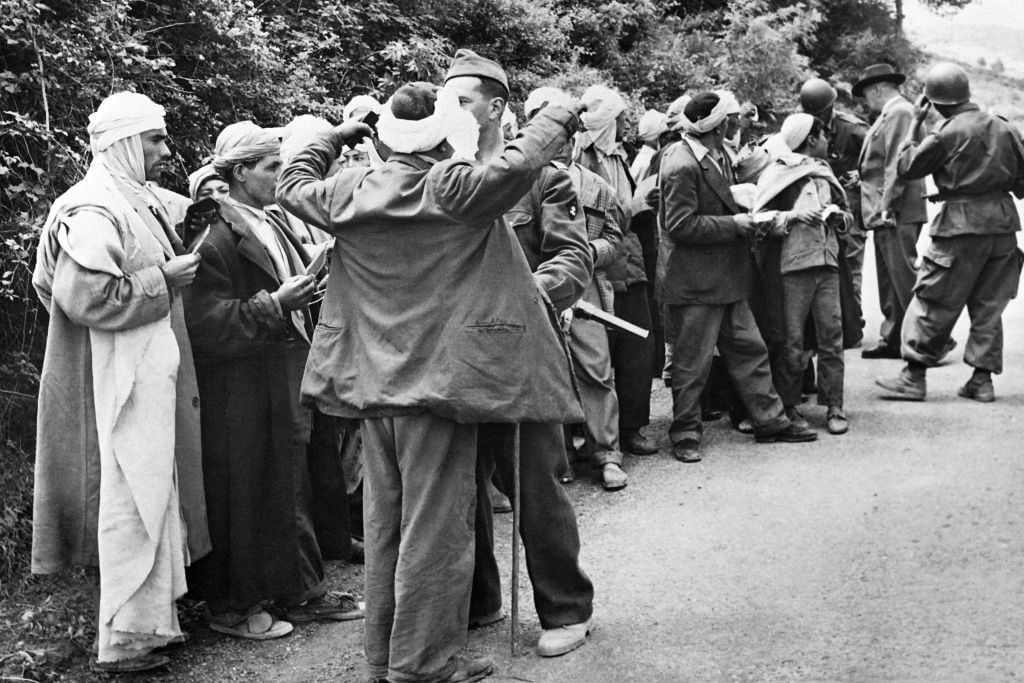 French army soldiers search residents of the Arba region, 40 kilometers from Algiers, near the Sakamody pass, on April 26, 1956, after three buses and a passenger car had been rushed into the ravine by rebels. Two French people traveling on motorcycles were also shot dead by the rebels. Photo by JACQUES GREVIN/AFP via Getty Images.

Stora presented his report in January 2021 to Macron, including practical recommendations to bridge the gap between the two countries politically and culturally. Macron also handed over the skulls of 24 nineteenth-century leaders of the Algerian resistance against French colonialism – out of the 500 skulls France keeps – after 170 years of displaying them at the Musée de l’Homme (Museum of Mankind) in Paris. This was a first in the history of French-Algerian relations, and it occurred on the occasion of the 58th anniversary of Algeria’s independence in July 2020.

These steps by Macron were meant to show many Algerians that he is serious about facing the crimes committed during the French colonial rule. Macron’s recent statement, however, brought the matter back to square one and escalated the Algerian position, which insists on a full apology for the crimes of colonialism in the period from 1832 to 1962. The Algerian government demands three conditions to bridge the gap: (1) giving the archival documents presently kept in France back to Algeria; (2) opening the French nuclear explosions file in southern Algeria; and (3) paying compensation and the full recovery of the skulls of the Algerian resistance fighters held in Paris.

France views the bilateral relations through a colonialist memory and logic, which goes up and down in accordance with the strength of the Algerian regime. When the Algerian regime was strong in the 1970s, French politicians and intellectuals were reluctant to rise any serious issues against Algeria in reference to colonial memory. France sought to maintain a solid and calm relationship with Algeria in an effort to preserve its economic interests as stipulated in the Évian Accords of 1962 that granted independence to Algeria.

Read: My Grandfather’s Fight against Colonialization in Algeria: The Scars of French War Crimes Won’t Be Forgotten

France, in fact, signed an accord with Algeria in 1968, with which it granted exceptional privileges to Algerians living in France. However, the weakness of the Algerian regime, starting with the military coup in 1992, left the door open for France to blackmail Algerians, who were in dire need of French support at international forums. France launched a campaign to nullify the 1968 accord of its content and made a unilateral amendment to it in 1994 with Decree No. 1103/94. France made another amendment in 2001, which reduced the privileges Algerians enjoy in France, restricting the freedom of movement of Algerians between France and Algeria.

France also started to discuss thorny issues between the two countries, such as the rights of the Pieds-Noirs, the French settlers in Algeria, who left Algeria after independence, and the right of return to their homeland of Algerian Harka, the Algerians who fought with France in the 1954-1962 war and who fled with the French army in 1962, including granting them a full pardon. France has practiced all forms of pressure on the Algerian ruling elite to reverse the policy of Arabization pursued by Algeria since 1972, which aimed at achieving cultural independence from France and strengthening the Algerian identity based on three main pillars: Islam, Arabism, and Amazigh identity.

It is strange that France succeeded, through its Francophone lobbies, in infiltrating the Algerian administration, in blocking the Arabization law of 1991 and the law of 1997, and in stopping all attempts to strengthen the role of the English language in the Algerian educational system. France also obstructed all efforts to pass a law criminalizing the colonial legacy of France by the Algerian parliament. The first draft was put up for discussion in 2009. But, with France’s strong influence on Algerian domestic decision-making, the Algerian regime failed to decolonize the colonial memory, which both the regime and the Algerian people consider one of the central issues in rearranging bilateral relations with France.

The successive French policies of obstructing the presence of Algerian Harkis, who fought alongside France during Algeria’s War of Independence, on French soil escalates during electoral campaigns, and has strengthened and consolidated the official and popular Algerian position. Perhaps the best evidence is Law No. 2005-158, which glorifies colonialism and was passed by the French General Assembly in February 2005 during the time of President Jacques Chirac.

Chirac considers the colonization of Algeria and the rest of African peoples as a matter of French pride.

Chirac considers the colonization of Algeria and the rest of African peoples as a matter of French pride. The fourth article of the law includes a paragraph stipulating that school programs should praise the positive role played by the French presence abroad, especially in North Africa. As expected, this law caused a deep rift in Algerian-French relations.

Even though Macron’s recent statement was a strategic move for the upcoming presidential elections in order to win the support of the French far right and to break the popularity of the National Rally, it reflects a deep French conviction not to retreat from the French position on the issue of colonial memory in Algeria.

For Algerians, the best option is a full recognition of French colonialism and its brutality. However, the only way to change the French position and secure a full apology is closely linked to the establishment of a strong and coherent government in Algeria. Macron’s positive statements and promises made before September 2021 and his retreat reflect a state of confusion among the French political elites that began since Nicholas Sarkozy came to power in 2007, and became even worse after Emmanuel Macron became the president in 2017 – a development that shook the French political system.

This happened internally, too, through the Yellow Vest movement, which began in May 2018. The movement deteriorated France’s image internationally and destabilized its political system in light of increasing populist and right-wing extremist rhetoric and the economic crisis.

This deterioration also happened externally through the continued decline of the French role in Africa, the complete loss of its role to Russia in the Central African Republic and Mali, and the loss of its influence in Libya and Algeria to Turkey.

Moreover, the outbreak of massive popular demonstrations against France in Senegal and Burkina Faso, and the Australian submarine crisis with the U.S. both shook its historical relationships even with its Western allies. 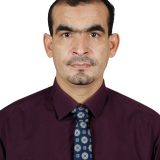 Tarek Abdel Salam is a researcher and expert on North African issues. He has previously taught history and Islamic civilization at the University of Malaya in Malaysia.

Also Read
Populism: The New Wave of “Magic” in Europe?