The resulting victory of the Taliban will extend well beyond the borders of Afghanistan. 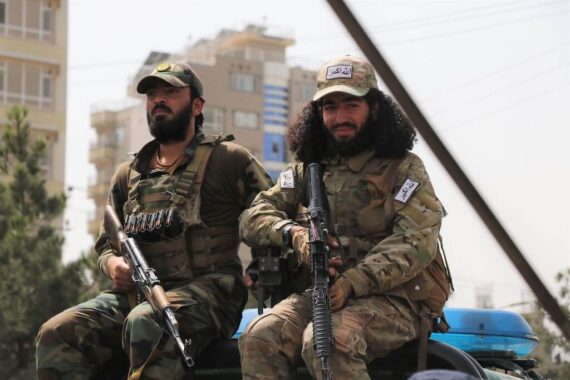 An urgent task is awaiting us: considering the progression of events, we must quickly liberate ourselves from the limits and confines placed on the Afghanistan discourse, which have been imposed by US-centered Western propaganda for over 20 years, and counting. A first step is that we must not allow the future political discourse pertaining to this very subject to remain hostage to American priorities – successes, failures and geostrategic interests.

For this to happen, the language itself must be confronted. This is critical if we are to truly glean valuable lessons from Afghanistan and to avoid a repeat of the previous failure of comprehending the U.S. defeat in Vietnam (1955-1975), the way it should have been understood, not the way Washington wanted Americans – in fact, the whole world – to understand. Vietnam was not merely an American ‘debacle’, and did not only culminate in an American ‘defeat’. It was also a Vietnamese victory and the triumph of the will of the people over the U.S. imperialist war machine.

In U.S. mainstream media and, to a large extent, academia, the Vietnam War history was almost entirely written from an American point of view. Even the anti-Vietnam war version of that history remained American-centric.

Alas, in the case of Afghanistan, many of us, whether in journalism or academia, whether wittingly or otherwise, remain committed to the U.S.-based discourse, partly because the primary sources from which our information is gleaned are either American or pro-American. Al Akhdar al-Ibrahimi, former United Nations Peace Envoy to Afghanistan, from 1997 to 1999, and again from 2001 to 2004, had recently, in an interview with French newspaper, Le Monde, reminded us of the importance of using proper language to describe the unfolding events in Afghanistan.

“Why always speak of an American defeat? First of all, this is a victory for the Taliban, which must be attributed to their tactical genius,” al-Ibrahimi stated. (Translated from French).

The answer to al-Ibrahimi’s question can easily be deduced from his own words because, to speak of a Taliban victory, is to admit to their ‘tactical genius’. The admission of such a truth can have far-reaching consequences.

The use of the terms defeat vs. victory is critical because it situates the conversation within two entirely different intellectual frameworks. For example, by insisting on the centrality of the question of the American defeat, whether in Afghanistan or Vietnam, then the focus of the follow-up questions will remain centered on American priorities: Where did the U.S. go wrong? What urgent changes must Washington implement in its foreign policy and military agendas to stave off its Afghanistan shortcomings? And where should the U.S. go from here?

How did poorly armed fighters manage to defeat the world’s combined greatest powers? Where should Afghanistan go from here? And what lessons can national liberation movements around the world learn from the Afghan victory?

However, if the focus remains centered on the victory of the Afghan resistance – and yes, it is Afghan resistance, not merely that of the Taliban or Pashtun – then the questions that follow would relocate the conversation somewhere else entirely: How did poorly armed fighters manage to defeat the world’s combined greatest powers? Where should Afghanistan go from here? And what lessons can national liberation movements around the world learn from the Afghan victory?

For the purpose of this article, I am concerned with the Afghan victory, not the American defeat. 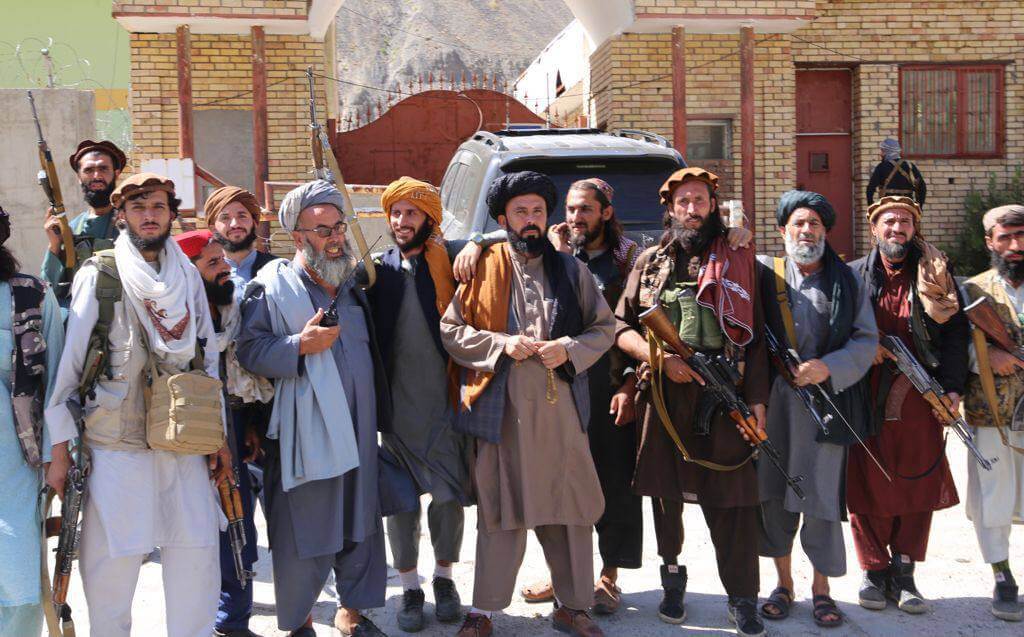 Taliban members pose for a photo after they took over Panjshir Valley, the only province the group had not seized during its sweep last month in Afghanistan on September 6, 2021. Photo by Bilal Guler, Anadolu Images

The Rise and fall of the ‘Terrorists’ Discourse

The collapse of the Soviet Union in 1991 had a massive impact, not only on the geopolitical map of the world but also on relevant global political discourses. As the USSR, its Warsaw Pact and global alliances began to disintegrate, the U.S. quickly moved into action, asserting its dominance from Panama (1989) to Iraq (1991) to elsewhere. The American objective was not merely a violent declaration of its triumph in the Cold War, but a message to the rest of the world that the ‘American century’ had begun and that no form of resistance to U.S. stratagem could be tolerated.

In the Middle East, in particular, the new narrative was in full display, with clear and repeated distinctions between ‘moderates’ and ‘extremists’, friends and enemies, allies and those marked for ‘regime change’. And, per this new logic, anti-colonial forces that were celebrated as liberation movements for decades fell into the category of the ‘terrorists’. This definition included Palestinian resistance groups, Lebanese and others, though these groups sought liberation from illegal foreign occupation.

Years later, the discourse on terrorism – summed up by George W. Bush’s statement in September, 2001, “Either you are with us or you are with the terrorists” – became the yardstick in which the world, according to Washington, was to be divided: freedom-loving nations and terrorists, extremist regimes. The latter category was eventually expanded to include Iraq, Iran and Syria. On January 29, 2002, North Korea was also added to Washington’s so-called ‘axes of evil’.

Read: Liberation Legitimacy: How Far Does It Count?

Afghanistan, of course, topped the American list of terrorist states, under various pretenses: initially the harboring of Osama Bin Laden and al-Qaeda and, later, the mistreatment of women, and so on. Eventually, the Taliban became a ‘terrorist’ group, leading an ‘insurgency’ against the ‘democratically-elected’ Afghan government in Kabul. The last 20 years were spent in the construction of this false paradigm.

In the absence of any strong voices in the media demanding an American withdrawal and defending the Afghan people’s right to resist foreign occupation, there was a near-complete absence of an alternative political discourse that even attempted to raise the possibility that the Taliban, despite all of their questionable strategies and practices, may, in fact, be a national liberation movement.

The reason we were discouraged from considering such a possibility is the same reason why U.S.-Western-Israeli propaganda insisted on removing any distinction between ISIS, Al Qaeda, Taliban, Hamas, Hezbollah, Al-Houthis and many other such groups. On the one hand, discussing the particularities of each movement requires real knowledge of the history and formation of these groups separately, and the political circumstances through which they continue to operate. This kind of knowledge is simply non-existent in the cliche, soundbite-driven mainstream media.

On the other hand, such understanding is inconvenient, as it complicates the deception and half-truths necessary for the U.S., Israel and others, to depict their military occupations, unlawful military interventions and repeated wars as fundamental to some imagined global ‘war on terror’ and, as some European intellectual circles prefer to dub it, a war on ‘radical Islam’.

However, unlike al-Qaeda and ISIS, Hamas, Hezbollah and the Taliban are not trans-border militant groups fighting a global agenda, but national liberation movements which, despite their emphasis on religious discourses, are political actors with specific political objectives confined largely within the borders of their own countries – Palestine, Lebanon and Afghanistan, respectively.

Regarding Hamas, London-based author, Daud Abdullah wrote in his just-released volume, ‘Engaging the World: The Making of Hamas Foreign Policy’ that “Hamas sees foreign relations as an integral and important part of its political ideology and liberation strategy. Soon after the Movement emerged, foreign policies were developed to help its leaders and members navigate this tension between idealism and realism. This pragmatism is evident in the fact that Hamas was able to establish relations with the regimes of Muammar Gaddhafi in Libya and Bashar al-Assad in Syria, both of whom were fiercely opposed to the Muslim Brotherhood.”

Consequently, it was also Abdullah who became one of the first to draw the parallels between Palestine and Afghanistan as soon as the Taliban declared victory in Kabul. In a recent article in the Middle East Monitor, Abdullah wrote, “Palestine and Afghanistan are salient examples. Throughout history, their peoples have witnessed numerous invasions and occupations. After two decades the U.S. has finally run out of stamina. Similarly, they will eventually realize the futility of supporting the Zionist occupation of Palestine.”

Indeed, the lesson of Afghanistan must be studied carefully, especially by resistance movements that are undergoing their own wars of national liberation.

Now that the U.S. has officially ended its military operations in Afghanistan, albeit not by choice, the emphasis on the so-called ‘war on terror’ discourse will certainly begin to fade. But what will come next? While another interventionist discourse will certainly fight for prominence in the new American thinking, the discourse of national liberation, based on legitimate resistance, must return to the center of the conversation.

Now that the U.S. has officially ended its military operations in Afghanistan, albeit not by choice, the emphasis on the so-called ‘war on terror’ discourse will certainly begin to fade.

This is not an argument for or against armed struggle, as this choice falls largely, if not entirely, on nations that are struggling for their own freedom, and should not be subject to the selective, frequently self-serving, ethics of Western moralists and activists. It is worth mentioning that international law does not prohibit people from using whatever means necessary to liberate themselves from the jackboot of foreign occupations. Indeed, myriad resolutions recognize the “legitimacy of (oppressed people’s) struggle by all means at their disposal, including armed struggle”. (UN Commission of Human Rights Resolution 1982/16)

Nevertheless, armed struggle without popular, grassroots support often amounts to nil, for a sustainable armed campaign, like that of Hamas, Hezbollah or the Taliban, requires deep-rooted social and socio-economic support. This proved as true in Vietnam as it did earlier in Algeria (1954-1962), Cuba (1953-1959) and even South Africa, which history of armed struggle has been largely written out in favor of what is meant to appear as a ‘peaceful’ anti-apartheid struggle.

Read: Contractors and Mercenaries will Live on after the US Leaves Iraq and Afghanistan

For nearly 30 years, partly as a consequence of the dismantling of the Soviet Union and the seemingly uncontested rise of the American empire, almost any form of armed struggle in national liberation contexts has been depicted to be a form of terrorism. Moreover, in the post-September 11, 2001 U.S.-dominated world, any attempt at arguing otherwise earned any daring intellectual the title of ‘terrorist sympathizer’.

Twenty years have elapsed since the American invasion of Afghanistan culminated in the defeat, not just of the U.S. but also of the U.S. political discourse on terrorism, resistance and national liberation. The resulting victory of the Taliban will extend well beyond the borders of Afghanistan, breaking the limits imposed on the discussion by western-centric officials, media and academia, namely the urgently needed clear distinction between terrorism and national liberation.

The American experiment, using firepower to control the world, and intellectual hegemony to control our understanding of it, has clearly failed. This failure can and must be exploited as an opportunity to revisit urgent questions and to resurrect a long-dormant narrative in favor of anti-colonial, national liberation struggles with the legitimate right –  in fact, responsibility – to use all means necessary, including armed struggle, to free itself from the yoke of foreign occupation.