Khan was a scientist, a metallurgist, and a nuclear-program architect, but at the same time, he was at the center of a secret network, having to strike deals to procure. 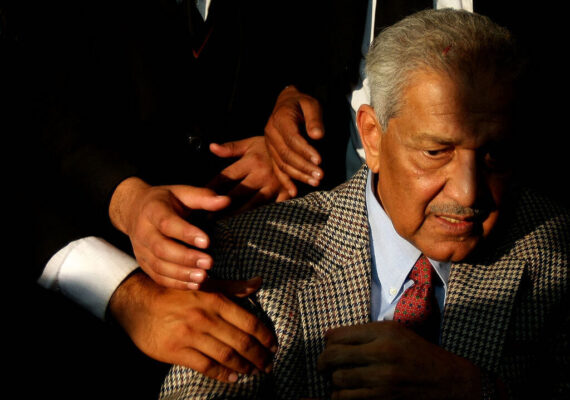 Supporters of Pakistani nuclear scientist Abdul Qadeer Khan try to shake hands with him during a ceremony at the Rawalpindi high court on January 9, 2010. Photo by Behrouz Mehri, Staff via Getty Images

Just two years after the December 1971 war between Pakistan and India, on May 18, 1974, India detonated a nuclear device, confirming it possessed the A-bomb.

Pakistan had already lost a significant part of its land in that war. East Pakistan, which had already been undergoing a civil war, had emerged as the independent state of Bangladesh with help from India. With the war lost, and the country now divided, the timing of the Indian nuclear test could not have been worse.

Prime Minister Zulfikar Ali Bhutto was under intense pressure to counter what was perceived as a threat to the very sovereignty of Pakistan. Just a few years back, in 1965, in an interview, Bhutto had said that if India built a nuclear bomb, “we will eat grass, even go hungry, but we will get one of our own.”

Sensing what was being cooked next door, he had already directed work on Pakistan’s nuclear program to be initiated and research had already begun in 1972. But it was progressing very slowly, and the prime minister’s restlessness was growing with each passing day. Now, India’s test had come to confirm his worst fears.

Like serendipity, a letter from a hardly known young scientist working in Amsterdam, Dr. Abdul Qadeer Khan, arrived, in which he offered his services to provide guidance for Pakistan’s nuclear program – Mossad officials would later regret having failed to assassinate him in time.

Dr. Khan, was immediately invited for a meeting by PM Bhutto. Upon his arrival in December 1974, he was surprised to learn that Pakistan’s nuclear program had already set about. What he did not like, however, was that the scientists were relying on the plutonium route. He sharply criticized this approach and explained the viability of the uranium enrichment route to Bhutto. Upon Bhutto’s request, he spelled out the action plan for highly enriched uranium to the scientists of the Pakistan Atomic Energy Commission (PAEC).

One year after the first meeting, when Khan came to his home country for his annual vacation, and happened to visit the site, he was dismayed with the pace of progress. The scientists already working in the PAEC were no lightweights and perhaps had little reason to be receptive towards the views of someone they saw – more or less – as a holidaymaker, coming from Amsterdam for vacation and telling them what to do. The distance bomb-learning program was not working.

But Khan’s frustration over the inefficiency of the program resulted in a reaction he did not expect: Bhutto invited Khan to leave his job, settle in Pakistan, and lead the program. Khan, who was well settled in his new home abroad, which he liked very much, and who also had a wife from the Netherlands, initially expressed hesitance.

Yet, this represented an opportunity to make his country a nuclear power. Just a year back, following the Indian nuclear tests, he was frantically trying to reach the prime minister, writing him letters, one after another. In his estimation, armed with an atomic bomb, India’s next target, after East Pakistan, would have been the Punjab and Kashmir.

Not only did Khan’s word reach Bhutto, but he was offered to lead an independent arm of the program and protect his country. With his wife reassuring him of her full support, which was his concern, he saw no reason to turn down the offer.

The program headed by the PAEC continued; however, Khan had differences with the scientists there as he was only inclined to take the uranium enrichment route, which was his area of expertise. In 1976, he was given the charge of a new setup, the Engineering Research Laboratories, which he developed from scratch. The company was later renamed by the succeeding president, General Muhammad Zia-ul-Haq, as “Abdul Qadeer Khan Research Laboratories (KRL)” in recognition of his services.

Khan had studied metallurgy in Germany, materials engineering in the Netherlands, and obtained a doctorate from the Catholic University of Louvain, Belgium. Just after his doctorate, he had joined the company Verenigde Machinefabrieken Stork-Werkspoor (VMF) in the Netherlands, which had a big portfolio of heavy machinery, including nuclear plants-related equipment.

Khan got posted by VMF as a consultant at Urenco, a uranium enrichment company, which used to provide enriched uranium to power plants in Germany, the Netherlands, the UK, and the United States. According to Khan, the company was facing problems with designing gas centrifuges, and being an expert in materials, he was one of the engineers posted to this top secret facility.

Thus, Khan brought with him his experience and expertise in designing gas centrifuge technologies for uranium enrichment, which represented perhaps the most critical part in developing weapons-grade nuclear technology. He started working at a rapid pace to build the facility, and to develop and acquire materials and technologies, as fast as possible, without being detected.

Khan was a scientist, a metallurgist, and a nuclear-program architect, but at the same time, he was at the center of a secret network, having to strike deals to procure whatever was required from wherever at minimum cost and in the shortest time. Sometimes, this might have meant defense cooperation with other countries. In any case, the work progressed swiftly, and by the 1980s, Pakistan had achieved the capability for nuclear explosion.

Interestingly, the PAEC and the KRL, both complemented each other, but in many ways emerged as competitors too. Both claimed to have reached the potential to make a bomb in the 1980s using their own routes.

When India mobilized its forces in 1987 and started some of the biggest war exercises since WWII, Pakistani General Zia-ul-Haq landed in India to “watch a test match.” At the airport, he briefly met Indian Prime Minister Rajiv Gandhi and warned him with a chilling equanimity, “Mr Rajiv, you want to attack Pakistan, do it. But keep in mind that this world will forget Hulagu Khan and Genghis Khan and will remember only Zia-ul-Haq and Rajiv Gandhi, because this will not be a conventional war but a nuclear war…”

With that threat, the war was averted. And Israel’s plans to strike KRL plants with India’s help, had fallen flat too.

The nuclear tests and Khan’s legacy

It was not until 1998 that Pakistan came to the fore with the bomb. When India performed its tests on May 11 and 13, 1998, Pakistan decided to go ahead with its own merely 17 days later. Pakistan conducted its nuclear explosions in an unpopulated, granite mountain range in Balochistan Province, under the name “Chaghi-I” on May 28, 1998 and “Chaghi-II” on May 30, 1998.

Before this, some had doubted Pakistan’s nuclear capability altogether. But the speed of Pakistani reaction came as a surprise even to those who believed it was in possession of an atomic bomb. Independent sources, based on seismic activity, confirmed that Pakistan had indeed conducted nuclear tests.

Today, the country is estimated to have a stockpile of nearly 165 nuclear warheads compared to India’s 156. Moreover, the KRL, in competition with the PAEC, operates a booming missiles program, in addition to other defense equipment.

Meanwhile, Khan became the target of Western media and governments quite early. In 1983, he was sentenced in absentia for trying to steal enrichment secrets from the Netherlands. He denied the charges, citing that the information he used to build the centrifuges was available in various sources which did not need any classified access. His conviction was overturned in 1986.

In 2004, Khan was accused of smuggling nuclear secrets and operating a nuclear black market. Pakistan, which is not a signatory to the Treaty of the Non-Proliferation of Nuclear Weapons (NPT), and hence not bound by its terms, assured the international community of cooperation to avoid a backlash and possible sanctions.

To the nation’s surprise, the country’s hero appeared on national television and expressed regret over his actions, extending an unconditional apology. He confessed to having supplied gas centrifuge components to Iran, Libya, and North Korea. Immediately, he was put under house arrest to prevent further proliferation.

His house arrest ended in 2009, when a court found the house arrest orders to be illegal; however, his freedom to move remained severely restricted and he was kept under watch until his death on October 10, 2021, a few weeks after he had recovered from COVID19.

As for the allegations, it is a story shrouded in mystery. Some of the alleged evidence implicating members of the nuclear black market network, was destroyed – not by Pakistan, but by the United States. Many of the suppliers that Khan was accused of collaborating with were from countries which were signatories to the NPT, making their actions even more questionable.

The deeper you delve into finding the so-called truth of this story, the deeper you’re sucked into a labyrinth of very paradoxical questions. Add to this, the fact that Khan retracted his earlier confessions and repeatedly suggested that he had made those statements under duress.

Nevertheless, one thing that does emerge clearly from his life’s work is that Dr. Abdul Qadeer Khan probably had little respect for the lopsided international treaties that safeguard the world’s nuclear weapon and missile cartels. It is little wonder that he was termed “at least as dangerous as Osama bin Laden” by the frustrated CIA director George Tenet.

In Pakistan, Dr. Khan continues to be a revered figure, especially among middle-aged and senior Pakistanis who have a memory of full-blown hostilities between India and Pakistan. In the words of one professor, who wished not to be named, “he ate grass, so that we [Pakistanis] don’t have to.”