Russia knows that its conventional military inventory is aged and cannot win a full-scale traditional war despite its numeric superiority. 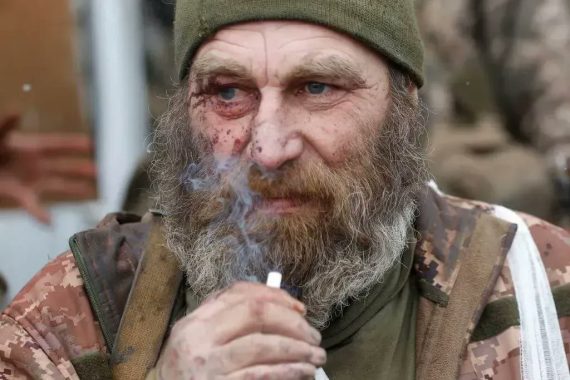 A wounded serviceman of Ukrainian Military Forces smokes after the battle with Russian troops and Russia-backed separatists in Luhansk region on March 8, 2022. Photo by Anatolii Stepanov AFP via Getty Images

But his subsequent speech indicates a shift of intention. Putin’s recognition of the independence of the self-proclaimed People’s Republics of Donetsk and Luhansk was an overlooked part of the speech. Putin emphasized the absence of a Ukrainian identity and stressed its Russian roots, demographic purification, Soviet investments and favoritism to Ukraine, and the so-called Nazi-type ideology of the Ukrainian leadership—all according to his reading the events.

Military objectives generally target achievable political goals and avoid utopic adventures that may end up in devastation. It is proper to ask, then, whether Russia’s political goals are achievable. This question is related to Russia’s grand strategy. Putin and his comrades represent a generation that enjoyed the triumph of the Russia-dominated Soviet Empire, the demise of the latter, and the emergence as the Russian Federation. It seems highly likely that a romantic yearning for the Russian imperial days of the 18th century and the Communist Soviet system of the Cold War may be an underlying motivation.

Russian political thinking praises Russian pride, but it is also concerned with survival. Russia needs a story to keep its continent-sized territory functioning and to make its multiethnic yet Russified demography resilient. The danger for the Russian leadership is to experience a further retreat that could make Russia a loose state on the path of collapse. Such a concern makes Putin more assertive and expansionist, mainly across Russia’s perceived sphere of influence.

For instance, Russia gained leverage after the Second Karabakh War by asserting its military presence at the heart of Karabakh for an extendable five-year period. The Kazakhstan stalemate at the beginning of 2022 presented another chance where Russia intervened in the Central Asian states in order to maintain stability. Furthermore, these regions have energy reserves satisfying the appetite of energy seekers as Russia indirectly prepared itself to challenge the energy demand of the broader globe.

Putin’s statements indicate a “nationalist imperialism,” which could have destructive consequences for regional and global orders—let alone Russia itself. Putin’s inclination is nationalist since Russia is at the core of his argument. On the other hand, nationalism in Russian thinking carries the risks of provoking ultranationalism or Slavophobia once a success story is concluded by tangible gains.

The revisionism and irredentism of Russia reveal the limits of expansion over the borders of former USSR states, with minor alterations. The first group of states are the ones that became NATO members after 1997, that were once the former “Allies of the Soviet Union” and that proceeded with their democratic transition.

The second group are still struggling for a stable regime, like Belarus. Russia coerces these countries to have pro-Russian regimes. The final group are countries squeezed between NATO and Russia, and not yet NATO member states, mainly Ukraine and Georgia.

Putin has employed strategies to destabilize these states through smart moves, which rest on five political and military strategies. Russia successfully achieves these strategies by being more discreet in terms of international law, at least, until the aggression against Ukraine, and exploiting strategic gaps and vulnerabilities in those countries.

First, Russia does not hesitate to intervene militarily and support a pro-Russian regime through political and military means, such as the case of Syria.

Second, Russian private military companies such as the Wagner Group are sent to war zones to support pro-Russian figures such as Khalifa Haftar of Libya and attempt to encircle NATO for strategic leverage such as the Russian military presence in Africa.

Third, mediation has become a primary effort to obtain political and military initiative, as was the case in the Karabakh war and Syria.

Last, Russia has kept third parties silent through defense sales and military cooperation such as the cases of China, India, and Egypt.

These cases show that Putin successfully employs political and military means by well-planned strategies, the ultimate goal being the survival of Russia through nationalism and expansionism over the Slavic states, and building a sphere of influence in its near abroad.

The Russian political goals in Ukraine are threefold. These are the fundamental tenets of the Russian quest for domination: (1) Repelling the West, unified under the NATO umbrella, from Russia’s “borders”; (2) Making the Russian identity dominant over Slavic nations, setting Ukraine as a lesson for the rest; (3) Show the “able” Russia to the former members of the Soviet Union.

Russia needs a success story to achieve its goals and, as a result, Russia’s possible failure on the ground may create undesirable consequences for the Russian identity, once Russians realize their country’s weakness.

This may cause both a disillusionment and a subsequent dissolution in the pro-Russian regimes, including Putin’s Russia. In this context and at this point, Russia’s coercive strategy over Ukraine and its current war with Ukraine have turned to a matter of life and death.

Putin’s order to activate the Strategic Nuclear Forces escalated the military and political tension with the West. Russia regularly updated its nuclear doctrine after 1993 so as to be able to use nuclear weapons if it was not the first to do so. In this sense, Russia challenged the concepts of deterrence and mutually assured destruction (MAD) for atomic warfare. The reason for such a preference would be the following.

Russia knows that its conventional military inventory is aged and cannot win a a full-scale traditional war despite its numeric superiority. Modern warfare, including proxy, hybrid, and asymmetric, defy the Russian conventional capabilities, but the West, or NATO, may hesitate to respond to a nuclear threat.

Nuclear warfare includes tactical and operational assets other than strategic assets. The slow pace of the Russian advance may need a tactical nuclear attack to create a gap in the defense lines of the weaker but stubborn Ukrainian forces. Urban warfare is costly for the Russian conventional forces.

A tactical or operational nuclear attack may clear the cities and push the Ukrainian leadership to accept Russian terms. In short, Russian aggression over Ukraine is related to its expansionism inspired by a political logic based on nationalist imperialism. The primary motivation is to revive Russia’s modern imperialism across its sphere of influence. However, despite Putin’s imperial quest, Russia lacks capacity to sustain a full-scale expansionism due to limited economic diversity, ageing weaponry, and an inconsistent strategy-making process.